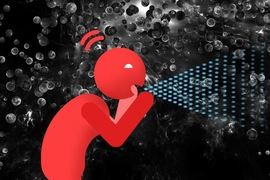 ↓ Download Image
Caption: “It’s important to understand how the process of fluid breakup happens,” Lydia Bourouiba says. “What is the physics telling us in terms of droplet size distribution, that we can use downstream to predict range of contamination?” 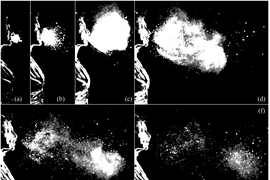 ↓ Download Image
Caption: This sequence illustrates the evolution of the multiphase turbulence cloud that suspends droplets emitted during a sneeze. Shown here are times ranging from 7 to 340 milliseconds post sneeze onset.
Credits: From the paper, “Visualization of sneeze ejecta: steps of fluid fragmentation leading to respiratory droplets,” by B. E. Scharfman, A. H. Techet, J. W. M. Bush, L. Bourouiba. 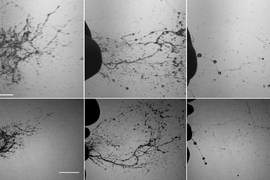 ↓ Download Image
Caption: Top and side views of the rapid fragmentation process of mucosalivary fluid occurring during a healthy sneeze. They reflect the sequence of formation of sheets and then filaments, ultimately leading to the formation of respiratory droplets outside of the mouth. These were captured with a camera operating at 6,000 to 8,000 frames per second.

Caption:
“It’s important to understand how the process of fluid breakup happens,” Lydia Bourouiba says. “What is the physics telling us in terms of droplet size distribution, that we can use downstream to predict range of contamination?”
Credits:
Illustration: Christine Daniloff/MIT

Caption:
This sequence illustrates the evolution of the multiphase turbulence cloud that suspends droplets emitted during a sneeze. Shown here are times ranging from 7 to 340 milliseconds post sneeze onset.
Credits:
From the paper, “Visualization of sneeze ejecta: steps of fluid fragmentation leading to respiratory droplets,” by B. E. Scharfman, A. H. Techet, J. W. M. Bush, L. Bourouiba.

Caption:
Top and side views of the rapid fragmentation process of mucosalivary fluid occurring during a healthy sneeze. They reflect the sequence of formation of sheets and then filaments, ultimately leading to the formation of respiratory droplets outside of the mouth. These were captured with a camera operating at 6,000 to 8,000 frames per second.
Credits:
From the paper, “Visualization of sneeze ejecta: steps of fluid fragmentation leading to respiratory droplets,” by B. E. Scharfman, A. H. Techet, J. W. M. Bush, L. Bourouiba.

Here’s some incentive to cover your mouth the next time you sneeze: New high-speed videos captured by MIT researchers show that as a person sneezes, they launch a sheet of fluid that balloons, then breaks apart in long filaments that destabilize, and finally disperses as a spray of droplets, similar to paint that is flung through the air.

Using two high-speed cameras, the researchers recorded more than 100 sneezes from healthy human subjects and captured the fraction of a second during which fluid is expelled from the mouth and flung through the air. Almost every sneeze produced the same paint-like pattern of fluid fragmentation, with slight variations: The more elastic the fluid, or saliva, the longer the fluid traveled before breaking into droplets.

This complex pattern of fluid breakup runs counter to what most people expect, which is that a sneeze produces a simple and uniform spray of droplets.

“It’s important to understand how the process of fluid breakup, or fluid fragmentation, happens,” says Lydia Bourouiba, the Esther and Harold E. Edgerton Assistant Professor in the Department of Civil and Environmental Engineering and head of the Fluid Dynamics of Disease Transmission Laboratory at MIT. “What is the physics of the breakup telling us in terms of droplet size distribution, and the resulting prediction of the downstream range of contamination?”

Bourouiba says understanding how sneezing disperses droplets can help researchers map the spread of infections through the environment, as well as identify individuals who may be “super spreaders.”

“This line of work is opening the way for us to gain insights into the variability between human subjects, and to determine to what extent the breakup process of mucosalivary fluid gives us information on the inner physiology of the host,” Bourouiba says.

Bourouiba and her colleagues, including Barry Scharfman, a former MIT graduate student; Alexandra Techet, associate professor of mechanical engineering; and John Bush, professor of mathematics, have published their findings in the journal Experimental Fluids.

The current work builds off research Bourouiba and Bush reported in 2014, in which they showed that coughs and sneezes produce clouds of gas that carry infectious droplets up to 200 times farther than they would have traveled if they were simply disconnected drops.

This time around, Bourouiba focused the high-speed imaging on the distribution of droplets produced from sneezing — a more violent expulsion, compared with coughs.

For their experiments, the researchers positioned each of three human subjects against a black backdrop and other settings, and set up two high-speed monochrome cameras, focused just in front of a subject’s mouth. To induce sneezing, they “tickled” the subjects’ noses and then recorded as much of the sneeze event as they could — a short window of under 200 milliseconds.

After analyzing more than 100 sneezes, the researchers identified a common pattern: Immediately after exiting the mouth, the exhaled fluid can form a wide sheet that balloons with the simultaneous expelling of air. As it travels through the air, the balloon bursts into thin filaments that eventually separate into individual droplets of various sizes that ultimately fall to the ground or remain suspended in the turbulent cloud.

The team also observed an interesting variation. For subjects with more elastic saliva, the expelled fluid tended to stay in filament form longer, forming beads along the filaments that eventually slid off as droplets.

“What we saw was surprising in many ways,” Bourouiba says. “We expected to see droplets coming out fully formed from the respiratory tract. It turns out that’s not the case at all. And this gives us a good baseline to expand our mechanistic understanding of violent expirations.”

Bourouiba is currently setting up a new lab space at MIT specifically designed to accommodate parallel experiments to understand various modes of disease transmission. This space will also include a smaller, climate-controlled chamber in which she will be able to visualize sneezes, coughs, and other modes of disease transmission, in collaboration with medical partners.

“One of the important goals I have for the lab is to tackle cold and influenza,” Bourouiba says. “Sometimes the symptoms are difficult to distinguish. In the coming year, at different cold and influenza seasons, we will be recruiting human subjects whom we can work with to see them in infection and in health.”

Bourouiba will be calling for volunteers to the new lab in the near future.

She says that ultimately, hard data on droplet distributions will help better predict and prevent a disease’s spread.

“The way transmission routes are being quantified even today still rely on the traditional way that has prevailed for hundreds of years, which is talking to people to survey who they talked to, where did they go, et cetera,” Bourouiba says. “There are clear limits to the accuracy of the data acquired via this process, and we are trying to have more precise measures of contamination and ranges to root disease control and prevention strategies in the physical sciences.”

This research was supported, in part, by the National Science Foundation and the Reed and Edgerton funds at MIT.

Assistant Prof. Lydia Bourouiba is highlighted in a documentary series that aims to inspire future generations of women in STEM. Producer Emily Driscoll writes in Scientific American that Bourouiba’s work studying droplets from sneezes and toilet flushes “could mean new designs for hospitals and our understanding of disease transmission.”

In this article and video, Nature reporter Corie Lok spotlights Prof Lydia Bourouiba’s work studying the fluid dynamics of coughing and sneezing. Bourouiba explains that her research combines “fluid mechanics to problems that are relevant in health and epidemiology to understand better how pathogens are transmitted.”

Tech Insider’s Chris Weller reports on a new study by MIT researchers that examines how sneezes travel and spread viruses. The findings could help researchers “predict and prevent disease spread,” Weller explains. “If they know how quickly a pathogen spreads via sneeze, then they can learn more about the risks posed by the viruses themselves.”

MIT researchers used high-speed cameras to examine how sneezes travel, reports Gillian Mohney for ABC News. The researchers found that “instead of a uniform cloud of droplets, a single sneeze would fragment in the air similar to paint being flung onto a canvas.”

Popular Science reporter Alexandra Ossola writes that MIT researchers are examining how drops of fluid from a sneeze travel. Ossola explains that gaining a “better understanding of these drops form and spread could help researchers and engineers stop the spread of disease, especially in enclosed spaces."

Prof. Lydia Bourouiba has modeled how droplets are formed after a person sneezes, reports Jonathan Webb for BBC News. “The process is important to understand because it determines the various sizes of the final droplets - a critical factor in how a sneeze spreads germs,” writes Webb.

MIT researchers have examined how droplets are formed in high-propulsion sneeze clouds, according to CBS Boston. “Droplets are not all already formed and neatly distributed in size at the exit of the mouth, as previously assumed in the literature,” explains Prof. Lydia Bourouiba.

MIT researchers have found that the high-velocity cloud created by the average human sneeze can contaminate a room in minutes, writes Robert Preidt for U.S. News & World Report. Sneeze droplets "undergo a complex cascading breakup that continues after they leave the lungs, pass over the lips and churn through the air," explains Prof. Lydia Bourouiba.