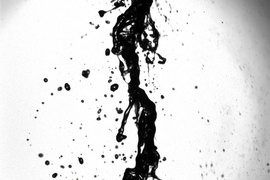 ↓ Download Image
Caption: Engineers at MIT can now predict a liquid’s droplet size distribution, including the likelihood of producing very big and very small droplets, based on one main property: the liquid’s viscoelasticity, or stickiness. 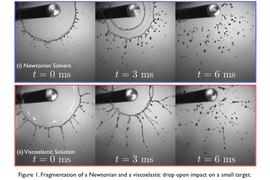 ↓ Download Image
Caption: Scientists have typically focused on what are known as Newtonian fluids, such as water and oil — relatively thin, homogenous liquids. But they’ve had difficulty predicting the distribution of droplet sizes observed for non-Newtonian fluids such as saliva, blood, paint, and resins.

Caption:
Engineers at MIT can now predict a liquid’s droplet size distribution, including the likelihood of producing very big and very small droplets, based on one main property: the liquid’s viscoelasticity, or stickiness.

Caption:
Scientists have typically focused on what are known as Newtonian fluids, such as water and oil — relatively thin, homogenous liquids. But they’ve had difficulty predicting the distribution of droplet sizes observed for non-Newtonian fluids such as saliva, blood, paint, and resins.

If you’ve ever splattered paint on a canvas or sprayed a cookie sheet with oil, you likely created — aside from a minor mess — a shower of droplets, ranging from dime-sized splotches to pencil-point specks.

Such droplet sizes may seem random, but now engineers at MIT can predict a liquid’s droplet size distribution, including the likelihood of producing very big and very small droplets, based on one main property: the liquid’s viscoelasticity, or stickiness. What’s more, the team has found that, past a certain stickiness, fluids will always exhibit the same relative range of droplet sizes.

Knowing how big or small a liquid spray’s droplets may be can help researchers identify optimal fluids for a number of industrial applications, from preventing defects in automotive paint jobs, to fertilizing farm fields via aerial spraying.

The researchers’ results were published in October in the journal Physical Review Letters. The paper’s lead author is Bavand Keshavarz, a graduate student in the lab of Gareth McKinley, who is the School of Engineering Professor of Teaching Innovation at MIT and the paper’s senior author. Their co-authors include Eric Houze, John Moore, and Michael Koerner of Axalta Coating Systems, a Philadelphia-based manufacturer of paints for commercial vehicles.

The ways in which liquids fragment, or break up into droplets, has been a fascination for centuries and an active field of study for the past few decades. Scientists, attempting to characterize liquid fragmentation, have typically focused on what are known as Newtonian fluids, such as water and oil — relatively thin, homogenous liquids that don't include any fine particles or long molecules such as polymers that would affect the way such fluids flow.

In the early 2000s, scientists derived a simple equation to describe how any Newtonian fluid behaves when atomized, or sprayed into droplets. Embedded in this equation was a single parameter, “n,” which determines how wide or narrow a liquid’s droplet distribution can be. The higher the value of “n,” the narrower the final size distribution is.

But when this value is relatively large, the equation fails to describe the broader distribution of droplet sizes observed for more viscoelastic, non-Newtonian fluids such as saliva, blood, paint, and resins. Keshavarz and McKinley suspected that a non-Newtonian fluid’s stickiness, or viscoelasticity, might have something to do with the mismatch.

“What we wanted to add to the literature was how viscoelasticity can change this parameter n, which is the most important parameter because it dictates how many droplets of a specific size a liquid can produce, compared to the average droplet size,” Keshavarz says. “Now for the first time for a variety of fluids, we were able to quantify that.”

To do so, Keshavarz and McKinley set up several experiments to observe liquid fragmentation in both Newtonian and non-Newtonian fluids. They used water and water-glycerol mixtures as the classic Newtonian fluids, and created non-Newtonian samples by mixing a solution of water-glycerol with varying amounts of polymers with different molecular weights. They also experimented with several industrial paints and resins.

The researchers subjected each liquid sample to three different atomization tests, first dropping liquids onto a flat surface, then spraying them through a nozzle, and finally, forming a spray of the liquid by colliding two jets. The team used a strobe light technique, originally developed by MIT’s Harold “Doc” Edgerton, to create split-millisecond images of each experiment.

The team observed almost 5,000 droplets for each liquid they tested. Their images showed that, in general, thinner, Newtonian fluids produced a narrower range of droplet sizes, regardless of the type of experiment performed, whereas the viscoelastic fluids had broader distributions, generating larger numbers of both big and small drops.

As they were sprayed or dropped, the viscoelastic fluids created long ligaments, or string-like projections, that first stretched, then eventually broke apart into droplets.

“Each image makes the ligaments look frozen in time,” Keshavarz says. “In a fraction of a millisecond, they break apart into a finite range of droplet sizes.”

Referring back to the original equation describing the fragmentation of Newtonian fluids, Keshavarz noted that the parameter “n,” which establishes the distribution of droplet sizes, is also determined by the smoothness of the ligaments that ultimately fragment into drops. In the images of their experiments, however, the researchers observed that the more viscoelastic fluids produced bumpier, more corrugated ligaments. Keshavarz hypothesized that the stickier a liquid is, the more it resists smoothing out as it forms a ligament.

To test this hypothesis, he developed a new experiment, called a “step-strain” test, in which he squeezed a liquid between two plates, then quickly pulled the plates apart, pulling the liquid up and stretching it into a ligament before it separated into drops. In high-speed imaging of these tests, the researchers observed that the viscoelastic fluids exhibited bumpier ligaments, resembling beads on a string. The stickier the liquid, the more corrugated the ligament became. The researchers measured the corrugations and found that, past a certain stickiness, the degree of a ligament’s bumpiness remained the same.

From their images of viscoelastic jets, the researchers also measured the rate at which each ligament thinned, also known as the liquid’s relaxation time. Similarly, they found that this rate becomes almost constant for viscoelastic liquids. The team performed some calculations to fit the relaxation time measurements into the original equation for liquid fragmentation, and found that, all other variables being known, the parameter “n” reached a minimum value no matter how sticky the fluid was, corresponding to a maximum breadth in the distribution of drop sizes.

In other words, the researchers identified the broadest distribution of droplet sizes that any viscoelastic, non-Newtonian fluid can possibly exhibit when sprayed.

“Regardless of the type of experiment, or the kind of polymer or concentration, we see this universal distribution, and it’s broadly applicable to a wide range of fluids,” McKinley says.

Ultimately, he says this new understanding of fluid fragmentation may be useful in a number of areas including combustion, pharmaceutical and agricultural sprays, inkjets, and the automotive coating industry, where manufacturers are looking for ways to prevent “over-spray” and increase the efficiency of spray-painting.

“When they spray a car, they have to tape the windows because no matter how careful you are, there’s always some overspray, which is wasted paint,” McKinley says. “Also, if you’re spraying paint, the biggest drops tend to show up as defects. That’s one reason you care about droplet size distribution: You want to know how big the biggest drops will be, because a good paint job at the end of the day should be a perfectly smooth finish.”

This research was supported, in part, by the Dupont-MIT Alliance and Axalta Coating Systems.

How to get fresh water out of thin air