Caption:
Wing feather of an African Darter (Anhinga rufa) immersed in water (dyed blue) and in oil (dyed red). As the feather is pushed down into the liquids, it repels the water (as shown by the downward curve of the water surface), while its surface is wetted by the oil (as shown by the upward curvature).
Credits:
Justin Kleingartner and Siddarth Srinivasan

Caption:
After being coated with a special solution, a feather from a common shelduck repels both the oil (red) and water (blue), causing them to bead up on the surface rather than spreading out.
Credits:
Justin Kleingartner and Siddarth Srinivasan

Feathers have long been recognized as a classic example of efficient water-shedding — as in the well-known expression “like water off a duck’s back.” A combination of modeling and laboratory tests has now determined how both chemistry — the preening oil that birds use — and the microstructure of feathers, with their barbs and barbules, allow birds to stay dry even after emerging from amazingly deep dives.

The new research, published in the Journal of the Royal Society Interface, studied how cormorants and other diving birds are able to reach depths of some 30 meters without having water permanently wet their protective feathers. The research was carried out by MIT professors Robert Cohen, Michael Rubner, and Gareth McKinley; graduate students Siddarth Srinivasan and Shreerang Chhatre; Andrew Parker of London’s Natural History Museum; and two others.

The team was able to separate chemical and structural effects to show why the combination of surface coating and shape is so effective. To do that, the researchers took feathers from six different types of diving birds. They coated them with a layer that neutralized the effect of the preening oil, and then recoated them with hydrophobic material, preventing variations in oil composition from affecting the results.

“It’s very hard to separate the two effects,” says McKinley, the School of Engineering Professor of Teaching Innovation in MIT’s Department of Mechanical Engineering. “By putting our own coating on it, then we can look at just the structure. That’s one thing that people hadn’t done before.”

It had been known that during dives, a thin insulating layer of air called a “plastron” is trapped by the feathers, meaning that water never comes into direct contact with the skin below the feathers. The team’s analysis now shows that beyond a depth of a few meters — far less than the depth these birds can reach — that plastron collapses, allowing water to penetrate into the feather structures. “It’s an abrupt transition,” says Cohen, the Raymond A. and Helen E. St. Laurent Professor of Chemical Engineering.

The depth-dependence of this phenomenon had not previously been known. But even after the collapse of the protective air layer, the preen oil changes the energy required to fully wet the feather’s barbs and barbules: In short, the wetting is reversible.

Consequently, when the birds emerge from the water, “if a feather gets wet, there is no need for it to dry out, in the traditional sense of evaporation,” Cohen says. “It can dry by directly ejecting the water from its structure, as the pressure is reduced as it comes back up from its dive.” The team refers to this as “spontaneous dewetting.”

“This might lead to the design of artificial surfaces that do the same thing,” Srinivasan says. “Let’s say you make a hydrophobic surface so that even if it wets, by designing it the right way, just by shaking it the water might spontaneously dewet, and it would be dry again.” 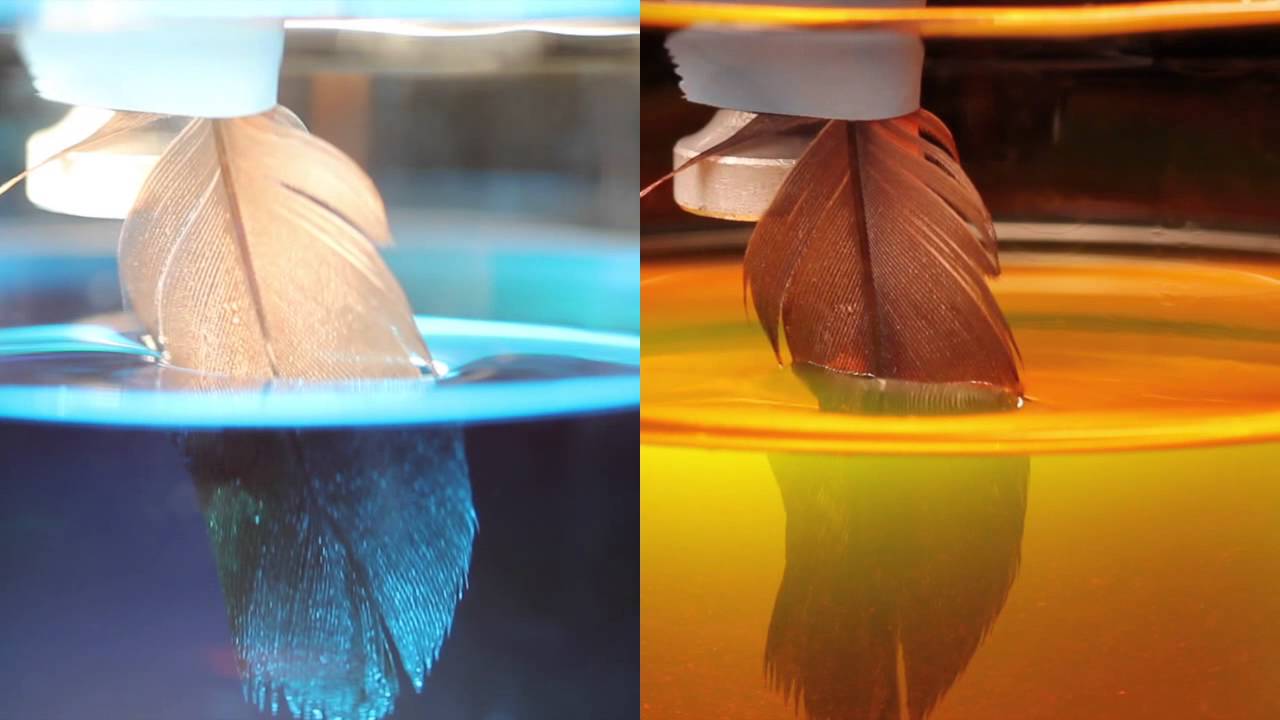 Play video
Wing feather of an African Darter (Anhinga rufa) immersed in water (dyed blue) and an oil (dyed red). As the feather is pushed down into the liquids, it repels the water (as shown by the downward curve of the water surface), while its surface is wetted by the oil (as shown by the upward curvature).

The MIT analysis showed that this process only works with water. If a feather is immersed in oil, as after an oil spill, the feathers are fully wetted, McKinley explains: “The thermodynamics show that if [feathers] get wetted by oil, they’re going to stay wetted, irreversibly, unless you steam clean them or something.”

The team’s research used simulations and lab tests of feathers from six different species, including three types of cormorants. In future work, the team will study the feathers of birds that can dive even deeper than cormorants, including penguins and auks.

Parker — from London’s Museum of Natural History, which provided feathers for the research — points out that the feathers’ structure provides just enough protection to keep the birds dry to the depths they tend to reach, with very little extra margin. “The results of this project show that the diving birds are only just adapted, partly through the microstructure of their feathers, to reach their maximum diving depths, without suffering permanent effects,” he says. “It is one of the most amazing examples of evolution and adaptation, with not a trace of overengineering.”

Eric Loth, a professor of engineering at the University of Virginia who was not involved in this work, says, “The authors used a novel quantitative approach to address the issue of feather wetting. As a result, they have answered key questions regarding the purpose and performance of the feather geometry interaction during bird diving and re-emergence.”

Loth adds, “This approach may be extended to other animals and plants, which would allow insight into biological adaptation to aquatic transient events.”

The work was supported by the Army Research Office, the Office of Naval Research, and the MIT-Legatum Center for Development and Entrepreneurship.