Sometimes water spreads evenly when it hits a surface; sometimes it beads into tiny droplets. While people have noticed these differences since ancient times, a better understanding of these properties, and new ways of controlling them, may bring important new applications.

Materials with a special affinity for water — those it spreads across, maximizing contact — are known as hydrophilic. Those that naturally repel water, causing droplets to form, are known as hydrophobic. Both classes of materials can have a significant impact on the performance of power plants, electronics, airplane wings and desalination plants, among other technologies, says Kripa Varanasi, an associate professor of mechanical engineering at MIT. Improvements in hydrophilic and hydrophobic surfaces could provide ketchup bottles where the condiment just glides right out, glasses that never fog up, or power plants that wring more electricity from a given amount of fuel. 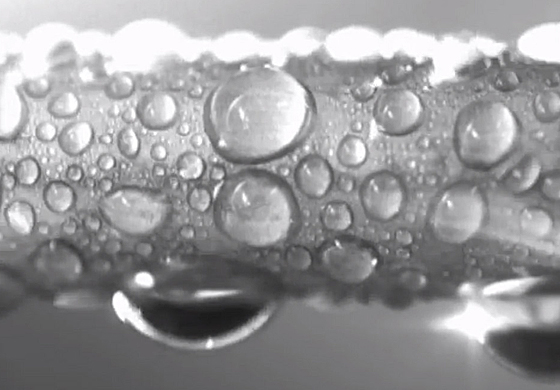 Hydrophilic and hydrophobic materials are defined by the geometry of water on a flat surface — specifically, the angle between a droplet’s edge and the surface underneath it. This is called the contact angle.

If the droplet spreads, wetting a large area of the surface, then the contact angle is less than 90 degrees and that surface is considered hydrophilic, or water-loving (from the Greek words for water, hydro, and love, philos). But if the droplet forms a sphere that barely touches the surface — like drops of water on a hot griddle — the contact angle is more than 90 degrees, and the surface is hydrophobic, or water-fearing.

“In a lot of cases, it’s the extreme behavior that’s useful in engineering,” says Evelyn Wang, an associate professor of mechanical engineering at MIT who specializes in superhydrophobic materials. For example, the surfaces of condensers in desalination plants or power plants work best when they are superhydrophobic, so droplets constantly slide off and can be replaced by new ones. Conversely, for applications where water flows over a surface to keep it from overheating, it’s desirable to have a superhydrophilic material, to assure maximum contact between the water and the surface.

Why do these phenomena happen? It’s essentially a matter of surface chemistry, which is determined by the characteristics of the materials used. The shape of a surface can also amplify the effects: For example, if a material is hydrophobic, creating nanopatterns on its surface can increase the contact area with a droplet, amplifying the effect and making the surface superhydrophobic. Similarly, nanopatterning of a hydrophilic surface can make it superhydrophilic. (There are exceptions, however, where special kinds of patterning can actually reverse a material’s ordinary properties.)

It gets more complicated when things are moving — as is often the case in real-world situations. For instance, when a flat surface is tilted, any droplets on it can begin to slide, distorting their shapes. So beyond measurements of static contact angles, a complete understanding of a surface’s properties also requires analysis of how the contact angles at its advancing (front) and receding (back) edges differ when the surface is slanted.

Because the natural world is full of hydrophobic and hydrophilic surfaces, the basics of the phenomenon have been known by scientists for at least two centuries. For example, the lotus leaf is a well-known example of a hydrophobic material, protecting the water-dwelling plant from becoming waterlogged. Some species, such as the stenocara beetle of Africa’s Namib Desert, combine both traits: The insect’s back and wings have hydrophilic bumps that encourage condensation from fog; these are surrounded by hydrophobic troughs, which collect the resulting droplets and funnel them toward the beetle’s mouth — allowing it to survive in one of Earth’s driest places.

One area of modern interest in hydrophobic and hydrophilic surfaces has to do with energy efficiency. Superhydrophobic surfaces under development by researchers at MIT and elsewhere could lead to better heat transfer in power-plant condensers, increasing their overall efficiency. Such surfaces could also increase the efficiency of desalination plants.

New technologies have also contributed to the field: The ability to create nanopatterned surfaces, with bumps or ridges just a few billionths of a meter across, has enabled a new generation of water-grabbing and water-shedding materials; new high-resolution imaging of surfaces in motion has enabled better understanding of the processes involved.

Research enabled by new technologies makes it possible to understand, and manipulate, these behaviors at a level of detail unthinkable a decade or two ago. But sometimes the new methods show how well scientists had things figured out long ago: “It’s amazing,” Varanasi says, “that some of the things we can validate now were predicted a century ago.”