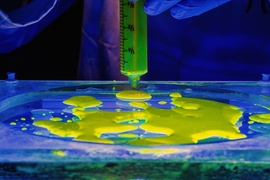 ↓ Download Image
Caption: “You start with something very simple, like the spread of a puddle, but you get at something very fundamental about intermolecular forces,” Ruben Juanes says.
Credits: Image: Jose-Luis Olivares/MIT and Amir Pahlavan 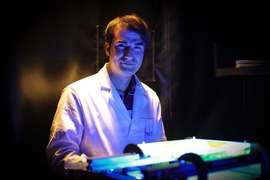 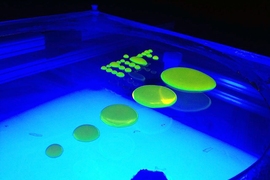 Caption:
“You start with something very simple, like the spread of a puddle, but you get at something very fundamental about intermolecular forces,” Ruben Juanes says.
Credits:
Image: Jose-Luis Olivares/MIT and Amir Pahlavan

When you spill a bit of water onto a tabletop, the puddle spreads — and then stops, leaving a well-defined area of water with a sharp boundary.

There’s just one problem: The formulas scientists use to describe such a fluid flow say that the water should just keep spreading endlessly. Everyone knows that’s not the case — but why?

This mystery has now been solved by researchers at MIT — and while this phenomenon might seem trivial, the finding’s ramifications could be significant: Understanding such flowing fluids is essential for processes from the lubrication of gears and machinery to the potential sequestration of carbon dioxide emissions in porous underground formations.

“The classic thin-film model describes the spreading of a liquid film, but it doesn’t predict it stopping,” Pahlavan says. It turns out that the problem is one of scale, he says: It’s only at the molecular level that the forces responsible for stopping the flow begin to show up. And even though these forces are minuscule, their effect changes how the liquid behaves in a way that is obvious at a much larger scale.

“Within a macroscopic view of this problem, there’s nothing that stops the puddle from spreading. There’s something missing here,” Pahlavan says.

Classical descriptions of spreading have a number of inconsistencies: For example, they require an infinite force to get a puddle to start spreading. But close to a puddle’s edge, “the liquid-solid and liquid-air interfaces start feeling each other,” Pahlavan says. “These are the missing intermolecular forces in the macroscopic description.” Properly accounting for these forces resolves the previous paradoxes, he says.

“What’s striking here,” Pahlavan adds, is that “what’s actually stopping the puddle is forces that only act at the nanoscale.” This illustrates very nicely how nanoscale physics affect our daily experiences, he says.

Whether someone’s spilled milk stops on the tabletop or makes a mess all over the floor may seem like an issue of little importance, except to the person who might get soaked, or have to mop up the spill. But the principles involved affect a host of other situations where the ability to calculate how a fluid will behave can have important consequences. For example, understanding these effects can be essential to figuring out how much oil is needed to keep a gear train from running dry, or how much drilling “mud” is needed to keep an oil rig working smoothly. Both processes involve flows of thin films of liquid.

Many more complex flows of fluids also come down to the same underlying principles, Juanes says — for example, carbon sequestration, the process of removing carbon dioxide from fossil-fuel emissions and injecting it into underground formations, such as porous rock. Understanding how the injected fluid will spread through pores in rock, perhaps displacing water, is essential in predicting how stable such injections may be.

“You start with something very simple, like the spread of a puddle, but you get at something very fundamental about intermolecular forces,” Juanes says. “The same process, the same physics, will be at play in many complex flows.”

Another area where the new findings could be important is in the design of microchips. As their features get smaller and smaller, controlling the buildup of heat has become a major engineering issue; some new system use liquids to dissipate that heat. Understanding how such cooling fluids will flow and spread across the chip could be important for designing such systems, Pahlavan says.

Howard Stone, a professor of mechanical and aerospace engineering at Princeton University who was not involved in this work, says, “The authors have produced a nice result … which is relevant to many wetting situations. They introduce a mathematical formalism involving non-hydrodynamic interactions between the liquid and solid and use this within a thin-film description common in the literature. Then, they obtain several new insights. I am confident the paper will interest many in the community.”

This initial analysis dealt only with perfectly smooth surfaces. In pursuing the research, Juanes says, a next step will be to extend the analysis to include fluid flows over rough surfaces — which more closely approximate the conditions, for example, of fluids in underground porous formations. “This work puts us in a position to be able to better describe multiphase flows in complex geometries like rough fractures and porous media.”

The work was supported by the U.S. Department of Energy.