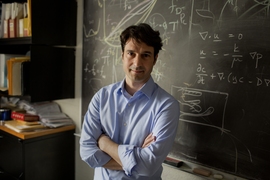 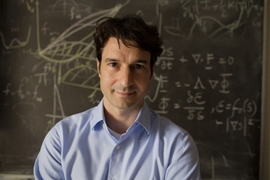 As a child in the Galicia region of northwestern Spain, Ruben Juanes was already fascinated by science, and that interest was fostered by a science teacher who taught him in the fifth and sixth grades.

One thing that really helped to bring the material to life, says Juanes — now the ARCO Associate Professor in Energy Studies at MIT — was that teacher’s passion for the scientific method, including having the students write detailed reports about their experiments, just as working scientists do. “Even at such an early age,” he says, he enjoyed “that combination of direct observation for a natural science experiment, and then the process of figuring out how the system works.”

His affinity for academia also came naturally: His father is an architect, and his mother a mathematician who taught at a university before going to work for the Spanish government as a statistician. His younger sister also became an architect.

While pursuing a bachelor’s degree at the University of La Coruna, Juanes was again profoundly influenced by some of the professors. “Several of them had done their PhD work in the U.S.,” he says. Theirs was still a relatively small and new engineering school — founded in 1989 — and hearing his professors describe their experiences at larger and more established American universities, “I started to see that was something I wanted to do.”

It was during his undergraduate studies that Juanes began working in the area that has defined his career ever since: studying how water and other fluids move through the ground, or mix with other liquids. “I started working with a professor there on groundwater hydrology,” he says. “At that time, I didn’t think that necessarily that was going to shape my entire academic life.”

The project that got Juanes started in that area was an analysis of the flow and transport of fluids in fractured underground reservoirs — a topic that has grown in importance as natural gas from such reservoirs has begun to transform the U.S. energy landscape.

Juanes enrolled at the University of California at Berkeley for his graduate studies and then went to Stanford University for postdoctoral work. It was there that he met a Canadian student, studying petroleum geology, who would later become his wife. They now have one young daughter.

Since coming to MIT in 2006, Juanes has expanded his studies of fluid motions to multiphase systems, where combinations such as oil, water and natural gas flow through pores within rock. After starting out with mathematical simulations of such multiphase flows, at MIT his work has evolved to include laboratory experiments replicating the complex dynamics of such flows.

“Now it really is often the experiments that lead our research,” Juanes says, “but theory and simulation allow us to make sense of what we observe.”

For example, a recent study by Juanes and his students demonstrated exactly how and where carbon dioxide emissions could be injected into deep saltwater aquifers. They showed that these formations — far below any freshwater that could be used for water supplies — could store most emissions generated by coal-fired and gas-fired power plants in the United States, and revealed how these gases would disperse over time.

While other groups have looked into such carbon sequestration, the simulations and experiments by Juanes and his team were the first to show that the process could work in a sustainable way at the scale required to contribute to climate-change mitigation. Their research involved both computer simulations and experiments using water and gas in a tank filled with glass beads to simulate grains of rock.

Juanes says his research is “driven by energy and the environment.” A better understanding of subsurface flows can enhance oil recovery — such as when natural gas or other fluids are injected into an oil field whose productivity has declined. “We want to make better use of hydrocarbon resources in those places where you already know the hydrocarbons are,” he says.

Another area of interest to Juanes is the mechanics of methane hydrate — an icelike substance that contains methane molecules inside its crystalline structure, and is abundant in ocean sediments and in permafrost. An important question is how methane hydrate trapped in sediments along continental shelves could be released as global temperatures increase. Juanes is working on a series of experiments to “try to understand the mechanisms involved.”

The rate of such releases is critical, he says. “If it’s gradual, most of it will be oxidized within the water column,” and will never reach the surface. “But that’s not true if the methane blasts through and reaches shallow water or the atmosphere quickly, so the contribution of greenhouse gas to the atmosphere will be dramatic.” Figuring out which scenario is more likely “depends on the physics of how gas percolates through soft sediment,” Juanes says.

Juanes says that he particularly appreciates working at MIT, “a place that is constantly bubbling with ideas.” The students and postdocs he works with, he says, “have taught me a lot more than I have taught them.”