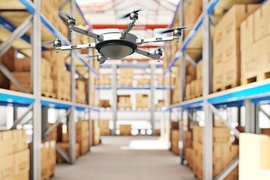 ↓ Download Image
Caption: MIT researchers have developed a system that enables small, safe, aerial drones to read RFID tags in large warehouses at a distance of several meters, while identifying the tags’ locations with an average error of about 19 centimeters.

Caption:
MIT researchers have developed a system that enables small, safe, aerial drones to read RFID tags in large warehouses at a distance of several meters, while identifying the tags’ locations with an average error of about 19 centimeters.

Radio frequency ID tags were supposed to revolutionize supply chain management. The dirt-cheap, battery-free tags, which receive power wirelessly from scanners and then broadcast identifying numbers, enable warehouse managers to log inventory much more efficiently than they could by reading box numbers and recording them manually.

But the scale of modern retail operations makes even radio frequency ID (RFID) scanning inefficient. Walmart, for instance, reported that in 2013 it lost $3 billion in revenue because of mismatches between its inventory records and its stock. Even with RFID technology, it can take a single large retail store three months to perform a complete inventory review, which means that mismatches often go undiscovered until exposed by a customer request.

MIT researchers have now developed a system that enables small, safe, aerial drones to read RFID tags from tens of meters away while identifying the tags’ locations with an average error of about 19 centimeters. The researchers envision that the system could be used in large warehouses for both continuous monitoring, to prevent inventory mismatches, and location of individual items, so that employees can rapidly and reliably meet customer requests.

The central challenge in designing the system was that, with the current state of autonomous navigation, the only drones safe enough to fly within close range of humans are small, lightweight drones with plastic rotors, which wouldn’t cause injuries in the event of a collision. But those drones are too small to carry RFID readers with a range of more than a few centimeters.

The researchers met this challenge by using the drones to relay signals emitted by a standard RFID reader. This not only solves the safety problem but also means that drones could be deployed in conjunction with existing RFID inventory systems, without the need for new tags, readers, or reader software.

“Between 2003 and 2011, the U.S. Army lost track of $5.8 billion of supplies among its warehouses,” says Fadel Adib, the Sony Corporation Career Development Assistant Professor of Media Arts and Sciences, whose group at the MIT Media Lab developed the new system. “In 2016, the U.S. National Retail Federation reported that shrinkage — loss of items in retail stores — averaged around $45.2 billion annually. By enabling drones to find and localize items and equipment, this research will provide a fundamental technological advancement for solving these problems.”

The MIT researchers describe their system, dubbed RFly, in a paper they presented this week at the annual conference of the Association for Computing Machinery's Special Interest Group on Data Communications. Adib is the senior author on the paper, and he’s joined by Yunfei Ma, a postdoc in the Media Lab, and Nicholas Selby, an MIT graduate student in mechanical engineering.

Relaying RFID signals and using them to determine tags’ locations poses some thorny signal-processing problems. One is that, because the RFID tag is powered wirelessly by the reader, the reader and the tag transmit simultaneously at the same frequency. A relay system adds another pair of simultaneous transmissions: two between the relay and the tag and two between the relay and the reader. That’s four simultaneous transmissions at the same frequency, all interfering with each other.

This problem is compounded by the requirement that the system determine the location of the RFID tag. The location-detection — or “localization” — system uses a variation on a device called an antenna array. If several antennas are clustered together, a signal broadcast toward them at an angle will reach each antenna at a slightly different time. That means that the signals detected by the antennas will be slightly out of phase: The troughs and crests of their electromagnetic waves won’t coincide perfectly. From those phase differences, software can deduce the angle of transmission and thus the location of the transmitter.

The drone is too small to carry an array of antennas, but it is continuously moving, so readings it takes at different times are also taken at different locations, simulating the multiple antenna elements of an array.

Ordinarily, to combat interference, the drone would digitally decode the transmission it receives from the tag and re-encode it for transmission to the reader. But in this case, the delays imposed by the decoding-encoding process would change the signals’ relative phases, making it impossible to accurately gauge location.

All radio systems encode information by modulating a base transmission frequency, usually by shifting it slightly up and down. But because an RFID tag has no independent power source, its modulations are detectably smaller than those of the reader. So the MIT researchers devised an analog filter that would subtract the base transmission frequency from the signals that reach the reader and then separate the low-frequency and high-frequency components. The low-frequency component — the signal from the tag — is then added back onto the base frequency.

At this point, however, another problem still remains. Because the drone is moving, the phase shift of the signals that reach the reader result from not only the drone’s position relative to the RFID tag but also its position relative to the reader. On the basis of the received signal alone, the reader has no way to tell how much each of those two factors contributed to the total phase shift.

So the MIT researchers also equip each of their drones with its own RFID tag. A drone alternates between relaying the reader’s signal to a tagged item and simply letting its own tag reflect the signal back, so that the reader can estimate the drone’s contribution to the total phase shift and remove it.

In experiments in the Media Lab that involved tagged objects, many of which were intentionally hidden to approximate the condition of merchandise heaped in piles on warehouse shelves, the system was able to localize the tags with 19-centimeter accuracy while extending the range of the reader tenfold in all directions, or one hundredfold cumulatively. The researchers are currently conducting a second set of experiments in the warehouse of a major Massachusetts retailer.

“Relays have been used in communications for a long time, even to bring networks to rural areas,” says Swarun Kumar, an assistant professor of electrical and computer engineering at Carnegie Mellon University. “What changes here is that one of the ends is battery-free, and they want to location-track the battery-free device, which requires phase-consistent measurements. These together make the problem quite challenging. That’s what I think is the conceptual novelty in this work. I anticipate that there might be a lot more applications than the inventory tracking problem — which in and of itself is quite important.”

MIT researchers have developed a system that allows drones to scan and read RFID tags, reports Amy Wallace for UPI. Rather than use the drones to carry RFID readers, researchers found a way to use “the drones to relay signals emitted by a standard RFID reader, allowing for the more effective locating of tags,” writes Wallace.