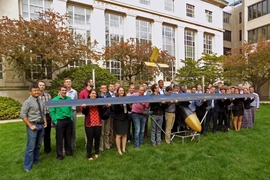 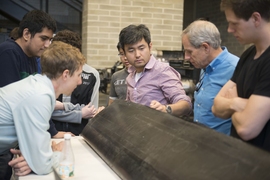 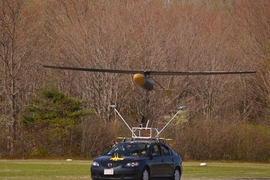 ↓ Download Image
Caption: JHO first flight, May 4, 2017 at Plum Island (Mass.) Airport. The aircraft is launched from a moving vehicle. 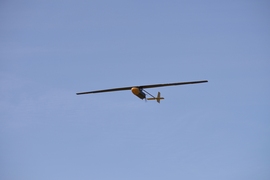 Caption:
JHO first flight, May 4, 2017 at Plum Island (Mass.) Airport. The aircraft is launched from a moving vehicle.

Caption:
JHO takes to the air for the first time, May 4, 2017.
Credits:
Photo: Veronica Padron/MIT

In the event of a natural disaster that disrupts phone and Internet systems over a wide area, autonomous aircraft could potentially hover over affected regions, carrying communications payloads that provide temporary telecommunications coverage to those in need.

However, such unpiloted aerial vehicles, or UAVs, are often expensive to operate, and can only remain in the air for a day or two, as is the case with most autonomous surveillance aircraft operated by the U.S. Air Force. Providing adequate and persistent coverage would require a relay of multiple aircraft, landing and refueling around the clock, with operational costs of thousands of dollars per hour, per vehicle.

Now a team of MIT engineers has come up with a much less expensive UAV design that can hover for longer durations to provide wide-ranging communications support. The researchers designed, built, and tested a UAV resembling a thin glider with a 24-foot wingspan. The vehicle can carry 10 to 20 pounds of communications equipment while flying at an altitude of 15,000 feet. Weighing in at just under 150 pounds, the vehicle is powered by a 5-horsepower gasoline engine and can keep itself aloft for more than five days — longer than any gasoline-powered autonomous aircraft has remained in flight, the researchers say.

In the spring of 2016, the U.S. Air Force approached the Beaver Works collaboration with an idea for designing a long-duration UAV powered by solar energy. The thought at the time was that an aircraft, fueled by the sun, could potentially remain in flight indefinitely. Others, including Google, have experimented with this concept,  designing solar-powered, high-altitude aircraft to deliver continuous internet access to rural and remote parts of Africa.

But when the team looked into the idea and analyzed the problem from multiple engineering angles, they found that solar power — at least for long-duration emergency response — was not the way to go.

“[A solar vehicle] would work fine in the summer season, but in winter, particularly if you’re far from the equator, nights are longer, and there’s not as much sunlight  during the day. So you have to carry more batteries, which adds weight and makes the plane bigger,” Hansman says. “For the mission of disaster relief, this could only respond to disasters that occur in summer, at low latitude. That just doesn’t work.”

The researchers came to their conclusions after modeling the problem using GPkit, a software tool developed by Hoburg that allows engineers to determine the optimal design decisions or dimensions for a vehicle, given certain constraints or mission requirements.

This method is not unique among initial aircraft design tools, but unlike these tools, which take into account only several main constraints, Hoburg’s method allowed the team to consider around 200 constraints and physical models simultaneously, and to fit them all together to create an optimal aircraft design.

“This gives you all the information you need to draw up the airplane,” Hansman says. “It also says that for every one of these hundreds of parameters, if you changed one of them, how much would that influence the plane’s performance? If you change the engine a bit, it will make a big difference. And if you change wingspan, will it show an effect?”

After determining, through their software estimations, that a solar-powered UAV would not be feasible, at least for long-duration use in any part of the world, the team performed the same modeling for a gasoline-powered aircraft. They came up with a design that was predicted to stay in flight for more than five days, at altitudes of 15,000 feet, in up to 94th-percentile winds, at any latitude.

In the fall of 2016, the team built a prototype UAV, following the dimensions determined by students using Hoburg’s software tool. To keep the vehicle lightweight, they used materials such as carbon fiber for its wings and fuselage, and Kevlar for the tail and nosecone, which houses the payload. The researchers designed the UAV to be easily taken apart and stored in a FedEx box, to be shipped to any disaster region and quickly reassembled.

This spring, the students refined the prototype and developed a launch system, fashioning a simple metal frame to fit on a typical car roof rack. The UAV sits atop the frame as a driver accelerates the launch vehicle (a car or truck) up to rotation speed — the UAV’s optimal takeoff speed. At that point, the remote pilot would angle the UAV toward the sky, automatically releasing a fastener and allowing the UAV to lift off.

In early May, the team put the UAV to the test, conducting flight tests at Plum Island Airport in Newburyport, Massachusetts. For initial flight testing, the students modified the vehicle to comply with FAA regulations for small unpiloted aircraft, which allow drones flying at low altitude and weighing less than 55 pounds. To reduce the UAV’s weight from 150 to under 55 pounds, the researchers simply loaded it with a smaller ballast payload and less gasoline.

In their initial tests, the UAV successfully took off, flew around, and landed safely. Hoburg says there are special considerations that have to be made to test the vehicle over multiple days, such as having enough people to monitor the aircraft over a long period of time.

“There are a few aspects to flying for five straight days,” Hoburg says. “But we’re pretty confident that we have the right fuel burn rate and right engine that we could fly it for five days.”

“These vehicles could be used not only for disaster relief but also other missions, such as environmental monitoring. You might want to keep watch on wildfires or the outflow of a river,” Hansman adds. “I think it’s pretty clear that someone within a few years will manufacture a vehicle that will be a knockoff of this.”

This research was supported, in part, by MIT Lincoln Laboratory.

MIT researchers have designed a drone that can stay aloft for several days and could serve as an airborne telecommunications hub for disaster zones, reports Katherine Lin for NBC News.  Prof. Warren Hoburg explains that the aircraft has a, “five-day endurance that is sized to carry a 10-pound payload at 15,000 feet.”

TechCrunch reporter Brian Heater writes that MIT researchers have developed a drone that can stay aloft for five days on a single tank of gas. “In addition to supporting areas in the wake of a disaster, the team believes the drone could go a ways toward helping tech companies…achieve their longstanding…dream of delivering internet access to rural areas.”