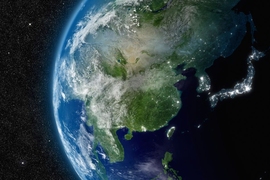 ↓ Download Image
Caption: “For China, it looks like industrial growth [has the greatest impact on water shortages] as people get wealthier,” Charles Fant says. “In India, population growth has a huge effect. It varies by region.”

Caption:
“For China, it looks like industrial growth [has the greatest impact on water shortages] as people get wealthier,” Charles Fant says. “In India, population growth has a huge effect. It varies by region.”

Economic and population growth on top of climate change could lead to serious water shortages across a broad swath of Asia by the year 2050, a newly published study by MIT scientists has found.

The study deploys detailed modeling to produce what the researchers believe is a full range of scenarios involving water availability and use in the future. In the paper, the scientists conclude there is a “high risk of severe water stress” in much of an area that is home to roughly half the world’s population.

Having run a large number of simulations of future scenarios, the researchers find that the median amounts of projected growth and climate change in the next 35 years in Asia would lead to about 1 billion more people becoming “water-stressed” compared to today.

And while climate change is expected to have serious effects on the water supply in many parts of the world, the study underscores the extent to which industrial expansion and population growth may by themselves exacerbate water-access problems.

“It’s not just a climate change issue,” says Adam Schlosser, a senior research scientist and deputy director at MIT’s Joint Program on the Science and Policy of Global Change and a co-author of the study. “We simply cannot ignore that economic and population growth in society can have a very strong influence on our demand for resources and how we manage them. And climate, on top of that, can lead to substantial magnifications to those stresses.”

The paper, “Projections of Water Stress Based on an Ensemble of Socioeconomic Growth and Climate Change Scenarios: A Case Study in Asia,” is being published today in the journal PLOS One. The lead author is Charles Fant, a researcher at the Joint Program. The other co-authors are Schlosser; Xiang Gao and Kenneth Strzepek, who are also researchers at the Joint Program; and John Reilly, a co-director of the Joint Program who is a senior lecturer at the MIT Sloan School of Management.

Teasing out human and environmental factors

To conduct the study, the scientists built upon an existing model developed previously at MIT, the Integrated Global Systems Model (IGSM), which contains probabilistic projections of population growth, economic expansion, climate, and carbon emissions from human activity. They then linked the IGSM model to detailed models of water use for a large portion of Asia encompassing China, India, and many smaller nations.

The scientists then ran an extensive series of repeated projections using varying conditions. In what they call the “Just Growth” scenario, they held climate conditions constant and evaluated the effects of economic and population growth on the water supply. In an alternate “Just Climate” scenario, the scientists held growth constant and evaluated climate-change effects alone. And in a “Climate and Growth” scenario, they studied the impact of rising economic activity, growing populations, and climate change.

Approaching it this way gave the researchers a “unique ability to tease out the human [economic] and environmental” factors leading to water shortages and to assess their relative significance, Schlosser says.

This kind of modeling also allowed the group to assess some of the particular factors that affect the different countries in the region to varying extents.

“For China, it looks like industrial growth [has the greatest impact] as people get wealthier,” says Fant. “In India, population growth has a huge effect. It varies by region.”

The researchers also emphasize that evaluating the future of any area’s water supply is not as simple as adding the effects of economic growth and climate change, and it depends on the networked water supply into and out of that area. The model uses a network of water basins, and as Schlosser notes, “What happens upstream affects downstream basins.” If climate change lowers the amount of rainfall near upstream basins while the population grows everywhere, then basins farther away from the initial water shortage would be affected more acutely.

Other scholars who have examined the work say it makes a valuable contribution to the field.

“They’re looking at a really important issue for the world,” says Channing Arndt, an agricultural economist at the United Nations’ World Institute for Development Economics Research, who thinks that the basic finding of the study “makes sense.”

Arndt also believes that the ambitious scope of the study, and the way it evaluates the effects of climate change as well as economic and population growth, is a worthwhile approach. “Doing it in this integrated way is the right way to go about it,” he adds.

The research team is continuing to work on related projects, including one on the effects of mitigation on water shortages. While those studies are not finished, the researchers say that changing water-use practices can have significant effects.

“We are assessing the extent to which climate mitigation and adaptation practices — such as more efficient irrigation technologies — can reduce the future risk of nations under high water stress,” Schlosser says. “Our preliminary findings indicate strong cases for effective actions and measures to reduce risk.”

The researchers say they will continue to look at ways of fine-tuning their modeling in order to refine their likelihood estimates of significant water shortages in the future.

“The emphasis in this work was to consider the whole range of plausible outcomes,” Schlosser says. “We consider this an important step in our ability to identify the sources of changing risk and large-scale solutions to risk reduction.”

In this Reuters video, Ben Gruber reports that MIT researchers have found a risk of water stress across Asia by 2050 due to economic and population growth. "We are looking at a region where nations are really at a very rapid developing stage,” explains Dr. Adam Schlosser, “so you really can't ignore the growth effect.”

MIT researchers have found that countries in Asia may face water shortages by 2050, the Press Trust of India reports. The researchers found that “the median amounts of projected growth and climate change in the next 35 years in Asia would lead to about 1 billion more people becoming ‘water-stressed’ compared to today.”

MIT researchers have found that population and economic growth could lead to severe water stress across Asia by 2050, reports Robert Ferris for CNBC. "We simply cannot ignore the fact that growth in population and the economies can play just as or more important a role in risk," explains Dr. Adam Schlosser.

Full story via Voice of America →

The high value of water