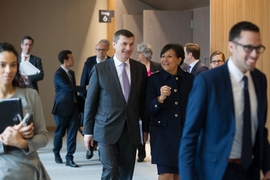 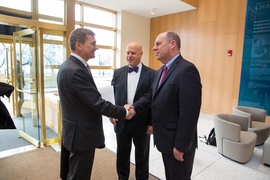 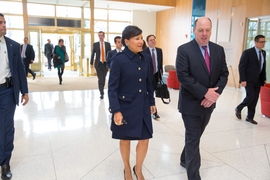 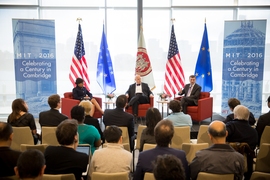 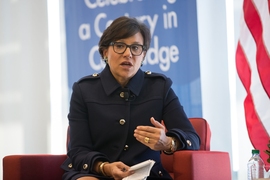 As the Internet has become a driving force in today’s global economy, governments have come to a stark realization: The world’s Web policies are inconsistent, imprecise, and in flux.

One example is the “Safe Harbor” accord, a data-transfer agreement between the United States and the European Union that was struck down by the EU’s highest court in October for not providing adequate privacy protection for European citizens.

“That agreement was developed 15 years ago, and obviously a lot has changed in the digital economy since then,” said United States Secretary of Commerce Penny Pritzker, who was at MIT Friday for a special discussion on Internet policy. “It’s been a multiyear process for leaders from both sides of the Atlantic to figure out a solution.”

The result is the recently published EU-U.S. “Privacy Shield” framework, which establishes new protections for how European data can be collected, managed, and used by U.S. tech companies such as Google and Facebook.

On Friday Pritzker discussed the agreement and other digital policy issues with Andrus Ansip, vice president for the Digital Single Market at the European Commission, which is the executive body of the European Union. The conversation was moderated by Danny Weitzner, a CSAIL principal research scientist and director of MIT’s Internet Policy Research Initiative.

While Pritzker and Ansip both described the Privacy Shield negotiations as challenging, they reiterated the importance of building on a U.S.-EU digital relationship that represents an estimated $260 billion in annual trade.

“The fundamental principle that allowed us to get through the technical issues [of the negotiations] was that, in both the U.S. and the EU, we protect privacy and take that protection seriously,” Pritzker said.

For Ansip, a key part of the Privacy Shield is its annual review clause.

“We don’t have to wait 13 years to understand whether [the deal] is safe enough,” he said, referring to the gap between the “Safe Harbor” agreement’s adoption and subsequent invalidation. “If there are problems, then every year we will have a review and can fix them.”

“Whether you’re a startup or an existing business, we want to help you navigate in the 80 countries where we’re located, so that you can take your products global early in your evolution,” Pritzker said.

Among the other agenda items were Ansip’s efforts to develop a “Digital Single Market” (DSM) for all of the EU’s 28 member countries, and how the DSM will help both Europeans and Americans.

Twenty-five years ago “we were able to tear down all of the physical barriers that divided us,” Ansip said. “With the economy becoming more and more digital, we have seen those barriers come back higher and higher. The goal is to now tear down those digital barriers that are dividing our member states and our 500 million citizens.”

Pritzker applauded Ansip’s progress and noted that the DSM would benefit U.S. firms.

“Addressing the European market has been a challenge because of regulatory fragmentation, in which large European countries get attention from American companies, but smaller ones don’t,” she said. “Consumers in both Europe and the U.S. will benefit from having better access to digital services and products.”

Earlier in the day, Pritzker and Ansip participated in an industry roundtable with Weitzner and representatives from such companies as Facebook, Google, and Spotify to discuss issues such as the Internet of Things.

Weitzner, who was previously the U.S. Deputy Chief Technology Officer for Internet Policy in the White House, has spearheaded several influential reports on data privacy for CSAIL. In July he oversaw the release of “Keys Under Doormats,” which argued that giving government special access to data poses major security risks; in the fall he co-chaired the “Privacy Bridges” report, which provided a series of proposals aimed at increasing transatlantic privacy protection.

Pritzker has visited MIT several times since joining U.S. President Barack Obama’s administration, including in 2014 for an MIT-White House workshop on big-data privacy and last year for a talk about the importance of innovation-based economic growth.