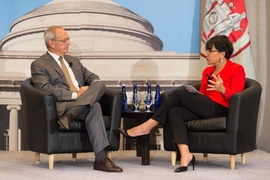 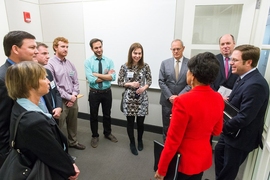 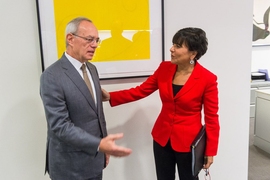 Caption:
Reif and Pritzker speak ahead of their remarks, delivered at the Koch Institute for Integrative Cancer Research.

“America should always remain on the cutting edge of the next revolutionary inventions,” Pritzker said in a speech to an audience at MIT’s Koch Institute for Integrative Cancer Research. She added that the U.S. has led the world economically because “innovation is the lifeblood of our economy.”

In emphasizing the importance of innovation, Pritzker raised several specific issues of ongoing policy debate: government funding levels for lab research and immigration policies that would, among other things, enable workers in science, technology, engineering, and mathematics (STEM) fields to remain in the U.S.

On the first count, Pritzker said, “Reducing investment is no way to run a business when you’re trying to grow and compete. And playing politics with our budget is no way to run our government when our global competitiveness is at stake.”

On the topic of immigration reform, Pritzker noted that about 40 percent of STEM graduate students at U.S. universities are citizens of other countries, and suggested that the lack of a more inclusive policy would create a kind of brain drain for the U.S.

“We should not be educating these young people and then requiring them to go home,” Pritzker said.

MIT President L. Rafael Reif, who conducted a one-on-one armchair chat with Pritzker after her talk, praised her work and underscored his view that research yields a large social dividend.

Asked by Pritzker how the government could help MIT and other academic institutions “build better innovative and entrepreneurial ecosystems,” Reif said the current model, which incorporates both academic research and private investment that takes ideas to the market, often “works extremely well.” However, Reif added, “It works best when the window of return to investment is about five years,” a duration usually tolerable for private capital.

But not all innovations can be transformed into products in that time, Reif observed. That leaves a challenge for industry, academia, and government: to collaborate in ways that can either speed the development of technologies or spread the financial foundations of innovative businesses, to help them deliver on their potential.

Encouraging more young scientists, Pritzker noted, “If you have the opportunity to do public service — even for a year or two — do it. It’s consequential, and we need people like you.”

Her visit included a tour of three research groups in MIT’s Research Laboratory for Electronics (RLE); a roundtable discussion about innovation ecosystems with MIT faculty and other stakeholders; and the armchair discussion with Reif, following her speech.

For its part, MIT has involved itself extensively in new projects to encourage more innovation-based businesses, and to study the new industrial economy, in an effort to aid growth and job creation.

Reif served as a co-chair of the White House’s Advanced Manufacturing Partnership (AMP) 2.0, and delivered remarks about the group’s final report at a White House forum hosted by Obama in October 2014. The AMP report made a series of recommendations for renewing and prioritizing advanced industrial production in the U.S., training workers, and helping smaller firms scale up their operations.

MIT also released a 2013 report from its Production in the Innovation Economy study group, which concluded that potentially valuable innovations occur throughout the advanced manufacturing sector, but can be left languishing — especially at smaller firms — due to flaws in the innovation ecosystem.

The Institute has also developed its own Innovation Initiative, a campus-wide collaboration that analyzes the dynamics of innovation while supporting programs intended to encourage entrepreneurship and new technology-based business.

As Pritzker noted in her comments today, the Obama administration has taken the AMP report seriously, and, in line with its recommendations, established seven of the 10 regional centers envisioned in a National Network for Manufacturing Initiative, a program that encourages regions to invest in suitable technologies. Pritzker pointed out that one such center, in Youngtown, Ohio, established with $30 million in federal funding, has since seen over $100 million in additional large-firm private investment. That center focuses on 3-D printing.

“We’re using our resources as creatively as we can to address some of these challenges,” Pritzker said at the roundtable discussion.

Every ecosystem is different — and that’s a good thing

In RLE, Pritzker visited labs in the areas of photonics and fiber-based technologies, speaking to faculty and students. At the roundtable discussion, Pritzker and several members of the MIT faculty discussed the elements of a successful innovation ecosystem, from funding mechanisms to providing inexpensive “incubator” spaces for startup firms.

As much as the framework for a regional innovation ecosystem might seem easily recognizable — good universities, available capital, a supply of talent, and an area or two where the local economy excels — creating new ones is “actually pretty hard,” said Scott Stern, a professor at the MIT Sloan School of Management who has studied the issue extensively.

In an interview with MIT News following her talk, Pritzker emphasized that her orientation as a policy leader is to think nationally, but create tools that let each regional ecosystem tailor itself to local conditions. While she noted that Kendall Square and Silicon Valley have world-leading industrial clusters — in information technology, biotechnology, and more — other cities can grow in a wide variety of areas.

“We work with different communities for them to build upon their unique strengths,” Pritzker said. “It’s a mistake to think innovation is only occurring in a few places in our country. There’s enormous innovation in … Cincinnati and Nashville and Atlanta, and other places around the country.”

Youngstown, she noted, “is reinventing their community based on manufacturing — just a different kind of manufacturing than they did 50 years ago. The philosophy we have is to help communities develop their individual strengths, not have a homogenized response for the United States.”

During a visit to MIT, Secretary of Commerce Penny Pritzker stressed the need for government investment in research, reports Jeff Engels for Xconomy. “Our investment in R&D in this country is flat since, I think, 1980. It’s actually quite concerning at a time when the rest of the world, as you said, is not standing still,” said Pritzker.