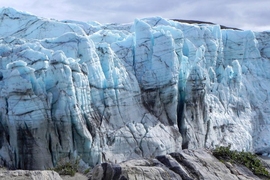 ↓ Download Image
Caption: A photo of the edge of the Greenland ice sheet. “With our technique, we can continuously monitor ice sheet volume changes associated with winter and summer,” Germán Prieto says.

Caption:
A photo of the edge of the Greenland ice sheet. “With our technique, we can continuously monitor ice sheet volume changes associated with winter and summer,” Germán Prieto says.

Researchers from MIT, Princeton University, and elsewhere have developed a new technique to monitor the seasonal changes in Greenland’s ice sheet, using seismic vibrations generated by crashing ocean waves. The results, published today in the journal Science Advances, may help scientists pinpoint regions of the ice sheet that are most vulnerable to melting. The technique may also set better constraints on how the world’s ice sheets contribute to global sea-level changes.

“One of the major contributors to sea level rise will be changes to the ice sheets,” says Germán Prieto, the Cecil and Ida Green Career Development Assistant Professor in the Department of Earth, Atmospheric and Planetary Sciences (EAPS) at MIT. “With our technique, we can continuously monitor ice sheet volume changes associated with winter and summer. That’s something that global models need to be able to take into account when calculating how much ice will contribute to sea level rise.”

Prieto and his colleagues study the effects of “seismic noise,” such as ocean waves, on the Earth’s crust. As ocean waves crash against the coastline, they continuously create tiny vibrations, or seismic waves.

“They happen 24 hours a day, seven days a week, and they generate a very small signal, which we generally don’t feel,” Prieto says. “But very precise seismic sensors can feel these waves everywhere in the world. Even in the middle of continents, you can see these ocean effects.”

The seismic waves generated by ocean waves can propagate through the Earth’s crust, at speeds that depend in part on the crust’s porosity: The more porous the rocks, the slower seismic waves travel. The scientists reasoned that any substantial overlying mass, such as an ice sheet, may act like a weight on a sponge, squeezing the pores closed or letting them reopen, depending on whether the ice above is shrinking or growing in size.

The team, led by Aurélien Mordret, a postdoc in EAPS, hypothesized that the speed of seismic waves through the Earth’s crust may therefore reflect the volume of ice lying above.

“By looking at velocity changes, we can make predictions of the volume change of the ice sheet mass,” Prieto says. “We can do this continuously over time, day by day, for a particular region where you have seismic data being recorded.”

Scientists typically track changing ice sheets using laser altimetry, in which an airplane flies over a region and sends a laser pulse down and back to measure an ice sheet’s topography. Researchers can also look to data gathered by NASA’s GRACE (Gravity Recovery and Climate Experiment) mission — twin satellites that orbit the Earth, measuring its gravity field, from which scientists can infer an ice sheet’s volume.

As Prieto points out, “you can only do laser altimetry several times a year, and GRACE satellites require about one month to cover the Earth’s surface.”

In contrast, ocean waves and the seismic waves they produce generate signals that sensors can pick up continuously.

“This has very good time resolution, so it can look at melting over short time periods, like summer to winter, with really high precision that other techniques might not have,” Prieto says.

The researchers looked through seismic data collected from January 2012 to January 2014, from a small seismic sensor network situated on the western side of Greenland’s ice sheet. The sensors record seismic vibrations generated by ocean waves along the coast, and they have been used to monitor glaciers and earthquakes. Prieto’s team is the first to use seismic data to monitor the ice sheet itself.

Looking through the seismic data, the scientists were able to detect incredibly small changes in the velocity of seismic waves, of less than 1 percent. They tracked average velocities from January 2012 to 2014, and observed very large seismic velocity decreases in 2012, versus 2013. These measurements mirrored the observations of ice sheet volume made by the GRACE satellites, which recorded abnormally large melting in 2012 versus 2013. The comparison suggested that seismic data may indeed reflect changes in ice sheets.

Using data from the GRACE satellites, the team then developed a model to predict the volume of the ice sheet, given the velocity of the seismic waves within the Earth’s crust. The model’s predictions matched the satellite data with 91 percent accuracy.

Nikolai Shapiro, research director for the National Center for Scientific Researchat the Institute de Physique du Globe de Paris, sees the group’s technique as “a very nice contribution in the direction of developing methods for environmental seismological monitoring.” He adds that such use of seismic data to study ice sheets  “will certainly become more and more frequent and will become even more valuable, with an ongoing effort to install seismic networks in the vicinity of ice sheets, both in southern and northern polar areas.”

Toward that end, the team plans next to use available seismic networks to track the seasonal changes in the Antarctic ice sheet.

“Our efforts right now are to use what’s available,” Prieto says. “Nobody has been looking at this particular area using seismic data to monitor ice sheet volume changes.”

If the technique is proven reliable in Antarctica, Prieto hopes to stimulate a large-scale project involving many more seismic sensors distributed along the coasts of Greenland and Antarctica.

“If you have very good coverage, like an array with separations of about 70 kilometers, we could in principle make a map of the regions that have more melting than others, using this monitoring, and maybe better refine models of how ice sheets respond to climate change,” Prieto says.

In addition to MIT and Princeton, the paper’s contributing institutions are Stanford University, Harvard University, and Boise State University. This research was supported, in part, by the National Science Foundation.

The Economist writes that MIT researchers have developed a new method for measuring changes in the world’s ice sheets, using earthquake sensors to monitor vibrations. “If more sensors are put into place, then Greenland’s ice sheets (and, presumably, those of other places) can be monitored on a daily basis.”