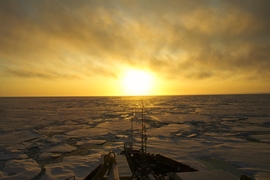 Caption:
Taken from the Canadian Research Icebreaker CCGS Amundsen, in the Beaufort Sea in September 2009.
Credits:
Photo: V. Dansereau
The Arctic — a mosaic of oceans, glaciers and the northernmost projections of several countries — is a place most of us will never see. We can imagine it, though, and our mental picture is dominated by one feature: ice.

Yet the Arctic sea ice is changing dramatically, and its presence shouldn’t be taken for granted, even over the course of our lifetimes.

According to new research from MIT, the most recent global climate report fails to capture trends in Arctic sea-ice thinning and drift, and in some cases substantially underestimates these trends. The Intergovernmental Panel on Climate Change (IPCC) Fourth Assessment Report, released in 2007, forecasts an ice-free Arctic summer by the year 2100, among other predictions. But Pierre Rampal, a postdoc in the Department of Earth, Atmosphere, and Planetary Sciences (EAPS), and colleagues say it may happen several decades earlier.

It’s all in the mechanics

Established in 1988 by the United Nations, the IPCC issues reports that represent an average of many findings, and is sometimes criticized for forecasting according to the “lowest common denominator” of climate research. Still, many policymakers put large stock in its predictions, so Rampal says it is important to continuously evaluate and improve their accuracy.

After comparing IPCC models with actual data, Rampal and his collaborators concluded that the forecasts were significantly off: Arctic sea ice is thinning, on average, four times faster than the models say, and it’s drifting twice as quickly.

Part of the problem, Rampal says, may be inadequate modeling of mechanical forces acting on and within the ice in the Arctic basin. Thus far, the IPCC models have largely focused on temperature fluctuations, which are one way to lose or gain ice. But according to Rampal, mechanics can be just as important: Forces such as wind and ocean currents batter the ice, causing it to break up. Ice that’s in small pieces behaves differently than ice in one large mass, which affects its overall volume and surface area.

“If you make a mistake at this level of the model, you can expect that you are missing something very important,” Rampal says.

The seasonal tug of war

Rampal says mechanical forces can play a significant role in winter, when little melting occurs but when strong winds and ocean currents can wreak drastic effects on the ice’s shape and movement.

Traditionally, in winter, most of the Arctic Ocean was covered with a thick sheet of ice. But today’s winter ice cover is thinner, meaning it breaks up more easily under the influence of winds and currents. It eventually looks like an “ensemble of floes,” Rampal says, instead of one large mass. In summer, natural melting due to warmer temperatures opens the door to even more breakup. (Scientists refer to these patches of floes as “pancake ice,” because the small circular pieces look like — yes — pancakes on a griddle.)

So, several factors are connected in a positive feedback loop: Thinner ice breaks more easily; smaller chunks of ice drift more quickly; and drifting ice is more prone to export and melting at lower latitude. But Rampal also cites examples of negative feedback loops, which may counteract some of the ice loss. For example, large cracks in winter’s ice cover help create new ice, since the extremely cold air in contact with the liquid ocean promotes refreezing, which leads to a sheet with greater surface area than before.

Because “everything is coupled” in these intricate feedback loops, “it’s hard to predict the future of Arctic sea ice,” Rampal says. Doing so will require more thorough modeling and real-world observations, especially of mechanical forces and other ice phenomena that have been poorly understood. Rampal is now working on a project with researchers at MIT and NASA’s Jet Propulsion Laboratory, whose goal is to combine models and observations for a more accurate picture of the state of the world’s oceans.

Bruno Tremblay, an associate professor in the Department of Atmospheric and Oceanic Sciences at McGill University, agrees that “the dynamic of sea ice is really important,” and inadequate modeling of mechanical forces is “part of the reason [the IPCC report] can’t predict correctly the future of sea ice decline.” Still, he cautions against jumping to overly grim conclusions, citing a need to consider subtle changes in the Arctic atmosphere: At some point, for instance, “maybe the wind no longer aligns itself with the Fram Strait, and that reduces ice export,” he says.

Although it’s impossible to say for sure when we might see an ice-free Arctic, the IPCC itself has acknowledged that its 2007 report may have painted too rosy a picture. “If you look at the scientific knowledge things do seem to be getting progressively worse,” said Rajendra Pachauri, IPCC chair, in an interview reported by The New York Times shortly after the report’s release. “So you’d better start with the interventions even earlier. Now.”