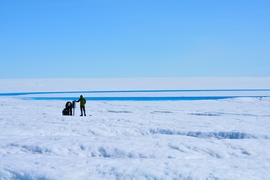 ↓ Download Image
Caption: Ian Joughin and David Shean work on a GPS station nearby a supraglacial lake on the western margin of Greenland's ice sheet in 2013.
Credits: Photo: Laura A. Stevens 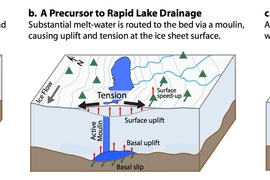 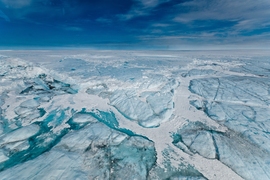 Caption:
Ian Joughin and David Shean work on a GPS station nearby a supraglacial lake on the western margin of Greenland's ice sheet in 2013.
Credits:
Photo: Laura A. Stevens

Each summer, Greenland’s ice sheet — the world’s second-largest expanse of ice, measuring three times the size of Texas — begins to melt. Pockets of melting ice form hundreds of large, “supraglacial” lakes on the surface of the ice. Many of these lakes drain through cracks and crevasses in the ice sheet, creating a liquid layer over which massive chunks of ice can slide. This natural conveyor belt can speed ice toward the coast, where it eventually falls off into the sea.

In recent years, scientists have observed more lakes forming toward the center of the ice sheet — a region that had been previously too cold to melt enough ice for lakes to form. The expanding range of lakes has led scientists to wonder whether Greenland will ultimately raise global sea levels higher than previously predicted.

Now researchers at MIT, Woods Hole Oceanographic Institution (WHOI), and elsewhere have found that while warming temperatures are creating more inland lakes, these lakes cannot drain their water locally, as lakes along the coast do, and are not likely to change the amount of water reaching the ground in inland regions.

“It’s essentially a check on the inner ice starting to move along this fast conveyor belt,” says Laura Stevens, a graduate student in MIT’s Department of Earth, Atmospheric and Planetary Sciences. “One of the big questions about the Greenland ice sheet is how much of the ice sheet [travels towards the coast] during the summer, and how much is entering into the ocean. Our hypothesis that inland lakes are less likely to drain locally suggests the ice sheet in that region won’t speed up. That’s good news, at least for the time being.”

Stevens and her colleagues, including Thomas Herring, a professor of geophysics at MIT, have published their results today in the journal Nature.

A trickle and a trigger

In summer 2006, Sarah Das, a glaciologist at WHOI, led a team to document the drainage of North Lake, a 10-meter-deep, 2-kilometer-wide lake on the western side of Greenland. The group observed that each summer, the lake, like many others, drained quickly, completely emptying in just a couple of hours.

“You can hear the water rushing down in the distance, and even if you’re a couple kilometers away, you see all these microcracks running along the ground around you,” Stevens says.

The researchers set up one GPS station near the lake to record the surface of the ice during its draining, and later identified a large fracture in the basin through which the water drained. However, it wasn’t clear what triggered the fracture that caused the lake to drain so quickly.

Das returned to Greenland in summer 2011, along with Stevens and others, to get a more detailed picture of the lake’s seasonal draining. The team set up 16 GPS stations in two rings around the lake, and recorded the movement of the ice as the lake drained once each summer over three consecutive summers.

From the GPS data, they observed a period of six to 12 hours, just before the lake drained, in which some water from the lake trickled to the bottom of the ice sheet through “moulins” — narrow vertical channels in the ice. During this brief period, the researchers observed water collecting at the bottom of the ice sheet, pushing up on the surface ice. This initial pooling of water seemed to trigger the rest of the lake to drain.

“That water will cause the ice above it to be jacked up like a dome, and then you’ve created tension at the surface that allows the ice sheet to start to fracture,” Stevens says. “Once a fracture gets beneath the lake, then water just starts to pour into that fracture, and the whole thing goes.”

North Lake is located within the coastal region of Greenland, where the ice sheet is thinner, and more moulins route water at the surface of the ice sheet to its base. In contrast, lakes further inland are higher in elevation and form over thicker ice. Stevens says it’s unlikely that inland lakes would drain, as there are fewer moulins near inland lakes, which prevents water from getting to the ground locally. Without these trigger channels, larger fractures would not form in the lake basin, and lakes would stay intact, simply refreezing in the winter or overflowing into a surface stream.

“It is critical to understand how and why these lakes drain in order to predict how much mass the ice sheet will contribute to sea-level rise in our warming climate,” Stevens says. “We find that while lakes are forming inland, they probably won’t drain by this … mechanism. The inland lakes will more likely drain their water via surface stream runoff, which transfers the water to the bed in more coastal areas of the ice sheet. So, while we see inland ice beginning to speed up as more melt happens inland, the draining of inland lakes likely won’t exacerbate the situation.”

Richard Alley, a professor of geosciences at Penn State University, says that the group’s results ultimately may not change Greenland’s effect on sea-level rise, as the ice sheet will continue to melt with warming temperatures. However, they will help scientists better predict how much Greenland’s melt will contribute to sea-level rise.

“For Greenland, the worst possible case won’t be quite as bad as people might have thought,” says Alley, who was not involved in the research. “I think that the big contribution here is to other scientists in the field; we will use these interesting and useful results to improve models and projections, and to guide further research.”

This research was funded in part by the National Science Foundation and NASA.

Huffington Post reporter Jacqueline Howard writes about how MIT researchers have uncovered what causes the rapid draining of the meltwater lakes atop Greenland’s ice sheet. Howard explains that, “the finding could help scientists better predict how much meltwater from the ice sheet is contributing to rising sea levels, especially as the climate in the region becomes warmer.”

Washington Post reporter Chris Mooney writes that MIT researchers have found that giant cracks allow for the rapid draining of lakes on Greenland’s ice sheet. “We know that the ice sheet will continue to increase its contribution to sea level rise over the coming years,” explains lead author Laura Stevens. “The implications of this study show us more of how these processes will play out.”

Putting the pieces together