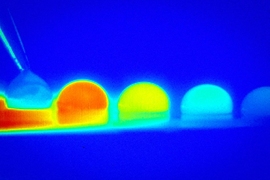 ↓ Download Image
Caption: In a time-lapse sequence, infrared imaging shows the temperature changes within a droplet of water as it moves across a treated silicon surface in response to temperature differences on that surface.
Credits: Image courtesy of N. Bjelobrk/Varanasi Research Group. Edited by MIT News

Caption:
In a time-lapse sequence, infrared imaging shows the temperature changes within a droplet of water as it moves across a treated silicon surface in response to temperature differences on that surface.
Credits:
Image courtesy of N. Bjelobrk/Varanasi Research Group. Edited by MIT News

Researchers at MIT and elsewhere have developed a new way of driving fluid droplets across surfaces in a precisely controlled way. The method could open up new possibilities for highly adaptable microfluidic devices, as well as for de-icing technologies, self-cleaning surfaces, and highly efficient condensers.

The new system uses differences in temperature to push droplets of water or other fluids across a smooth surface, allowing precise control by simply turning heaters and coolers on and off. The finding is described this week in the journal Physical Review Fluids, in a paper by MIT associate professor of mechanical engineering Kripa Varanasi, professor David Quere at ESPCI in Paris, MIT postdoc Nada Bjelobrk, graduate student Henri-Louis Girard, Srinivas Subramanyam PhD ’16, and Hyuk-Min Kwon PhD ’13.

The differences in temperature on a surface, the researchers report, cause a change in the amount of surface tension across the droplet. That causes the droplet to move toward the direction that lowers its energy — the direction of higher surface tension. But this only works if the surface has been treated in a way that prevents droplets from getting pinned to it.

The surface treatment is one that Varanasi and his collaborators have been developing for years. It forms the basis of a startup company called LiquiGlide that is commercializing the technology for use in containers, such as ketchup bottles that can easily pour out all their contents.

This video shows the response of droplets on silicon surfaces, showing that untreated or textured surfaces do not allow the droplets to move in response to temperature differences, but that on a surface with a lubricant on a textured surface, the droplets move easily. (Video courtesy of Henri-Louis Girard/Varanasi Research Group. Video has been sped up.)

The treatment consists of texturing a surface at microscale and then impregnating it with a layer of oil, which fills the spaces between the posts and becomes trapped there by capillary forces. This trapped lubricant makes the surface slippery for the droplets. Furthermore, the droplets have a relatively large contact area with the surface, allowing for a rather large temperature difference across the droplet and a higher propulsion force. In contrast, droplets did not move on superhydrophobic surfaces inspired by lotus leaves, as their contact area is too small for the temperature gradient to be sufficient to move the droplet.

The basic effect this team is exploiting, called thermocapillary motion, has been demonstrated before by other researchers, but in those cases the process required very large temperature differences, and even then produced only very slow movements, making it unsuitable for most practical applications. The new system, with its slippery surface, requires much smaller temperature changes and significantly speeds up the movement of the droplets, propelling them up to 10 times faster.

“There have long been attempts to use thermocapillarity to propel water droplets on surfaces,” Varanasi says, but only now “can water droplets be moved at appreciable speeds,” which would be especially useful for many applications.

The finding might be used to produce new kinds of microfluidic devices, for example for biomedical or chemical testing. Instead of using fixed, physical barriers to direct the flow of liquid, these devices could use arrays of heating and cooling elements to change the configuration of flows rapidly, at will, by simply adjusting the regional temperature differences on the surface.

“You could move drops around, mix them, move them to reaction sites,” Girard says, and thus create a highly flexible and adjustable “lab on a chip.” The system also allows precise control over the speed of the moving droplets. “You could pattern heaters in two dimensions and make the droplets follow a maze,” he says.

This video is an infrared side view of the motion of a droplet as it moves across a treated silicon surface in response to temperature differences on that surface. It demonstrates how the droplet initially equilibrates in temperature with the substrate and then, as it moves, continues to be in thermal equilibrium with the surface. (Video courtesy of N. Bjelobrk/Varanasi Research Group.)

The process might also find applications, the researchers say, in areas such as de-icing airplane wings and other surfaces, or developing powerful condensers. In power plants, for example, the faster droplets can be shed from condensing surfaces, the more efficiently the plant can run.

The concept might also find applications for research in space, in a microgravity environment where normal laboratory devices that depend on gravity to move liquids around wouldn’t work.

Initially the research was basically “curiosity driven,” Varanasi says, and it began with a discussion at a conference, where he and Quere sketched the concept on a napkin. Now, he says, by allowing for a series of precisely controlled experiments, this system “also allows us to really understand the physics of thermocapillarity” better than ever before.

“Moving droplets on superhydrophobic surfaces has been considered for a while,” says Neelesh Patankar, a professor of mechanical engineering at Northwestern University who was not associated with this research. “However, pinning of the contact line has indeed restricted droplet movement achieved on superhydrophobic surfaces,” he says. “This work demonstrates a remarkable five-fold increase in droplet speed if liquid-impregnated surfaces are used instead. I will look forward to translation of this approach to microfluidic devices.”

The work was supported by the MIT France program and the Swiss National Science Foundation.

During The Economist’s weekly podcast, Kenneth Cukier and Paul Markillie discuss how the MIT researchers behind LiquiGlide, a non-stick coating, have developed a way to precisely steer fluid droplets. The new technique could be used in microfluidic devices, in de-icing techniques and to increase the efficiency of condensers.