Biology professor and mentor to many investigated protein folding and its role in disease.
Whitehead Institute
Publication Date:
Press Inquiries 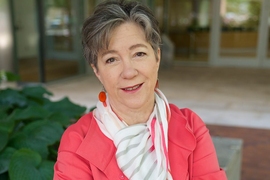 MIT Professor Susan Lee Lindquist, a member and former director of the Whitehead Institute, and one of the nation’s most lauded scientists, yesterday succumbed to cancer at age 67. Her nearly 40-year career was defined by intellectually courageous, boundary-defying research and a passion for nurturing new generations of scientific talent.

“Sue has meant so much to Whitehead as an institution of science, and as a community of scientists, and her passing leaves us diminished in so many ways,” reflects David C. Page, director of Whitehead Institute and a professor of biology at MIT. “She was a risk-taker and an innovator. She believed that if we were not reaching for things beyond our grasp, we were not doing our job as researchers; if we were not constantly striving for that which we could only imagine, we were not fulfilling our obligations to society as scientists.”

A cornerstone of the Whitehead Institute community, a professor of biology at MIT, and a Howard Hughes Medical Institute Investigator, Lindquist was a widely respected researcher with a global reputation for biomedical innovation. She made numerous, invaluable contributions to the study of protein folding, demonstrating that alternative protein conformations can have profound and unexpected influences. Lindquist’s research transformed budding yeast into a model organism for studying human disease, evolution, and biomaterials.

She was best known for her work on prions — proteins that exhibit an unusual ability to exist in multiple stable structural states, with altered functions depending on the state. Using yeast, she and her colleagues demonstrated that prions have the capacity to drive change in an organism’s inherited characteristics without changing its DNA or RNA — relying instead on an ability to change how proteins fold. In a seminal breakthrough in evolutionary biology, her laboratory showed that prions can help activate many previously hidden (inactive) biophysical interactions, producing new traits that are passed on to subsequent generations. In other words, by uncovering (activating) previously hidden genetic variation that can help cells survive changes in their environment, prions provide a mechanism for the evolution of beneficial new traits.

In humans, devastating neurological illnesses such as Alzheimer’s, Parkinson’s, Creutzfeldt-Jakob, and Huntington’s diseases involve proteins that change their conformation and thereby spur pathological processes. Among the many technical innovations created by her lab, Lindquist imported several of these disease-causing proteins into yeast, creating a platform with which to study disease-causing changes in protein folding in action and to test potential therapies for the ability to prevent the protein’s toxicity.

A committed teacher and dedicated mentor to generations of biomedical and basic research scientists, Lindquist served as a professor at the University of Chicago for 23 years and then at MIT, where she had taught concurrent with her Whitehead Institute appointment since 2001. During her 15-year career at Whitehead alone, she supervised 115 fellows, graduate students, and undergraduates.

“Inspired by Susan’s seminal work on the role of protein folding in evolutionary processes, I came to her laboratory at the Whitehead on a sabbatical from my role as a professor of pediatric oncology,” remembers Luke Whitesell, a senior research scientist in the Lindquist lab at Whitehead Institute. “Breaking traditional boundaries, we sought to learn whether some of the same basic mechanisms she had discovered in yeast might fuel the malignant progression of cancers and enable them to acquire drug resistance. The nurturing, extraordinarily cross-disciplinary research environment that she had created for her students and postdocs was captivating. Over a dozen years later, I am still here, privileged to have assisted her in training a new generation of physicians and scientists who share her conviction that deep biological insight is essential to improving the treatment of human diseases. We are all devastated by her loss, but determined to carry her vision forward.”

Brooke Bevis, manager of the Lindquist lab, observes that, “Sue was the most creative, out-of-the-box scientific thinker I’ve known. She had a unique biological intuition — an instinct for the way things worked and the right questions to ask. And she was indefatigable, seeming to draw strength and stamina from the science itself.”

“Sue was a terrific scientist, colleague, and friend to many of us,” says Alan Grossman, the Praecis Professor of Biology and head of MIT’s Department of Biology. “She will be deeply missed at MIT and in the scientific community. Our thoughts and wishes go out to her family and loved ones.”

“Sue's bold strategies and unique ideas to understand neurodegenerative disease were recognized by her peers and supported by generous partners, including the JPB Foundation and the Belfer Family Foundation,” observes Li-Huei Tsai, professor of neuroscience and director of the Picower Institute for Learning and Memory at MIT. “She was a titan in the field and a genuine luminary, appreciated for her candor, friendship, thoughtful behavior, and superb communication skills. Her work and influence will continue to accelerate the fight against diseases such as Parkinson’s and Alzheimer’s, as well as inspire and educate upcoming generations of scientific leaders.”

“I met Sue when I arrived at the University of Chicago in 1980, and we’ve been close friends ever since. I was Sue’s maid of honor at her wedding; she introduced me to my husband,” recalls Elaine Fuchs, the Rebecca C. Lancefield Professor and Howard Hughes Medical Institute (HHMI) Investigator at The Rockefeller University. “In Chicago, we taught together and shared our HHMI labs. Throughout these past 35 years, we’ve fueled each other’s science through many discussions and dinners together. I’ve never met another scientist as creative and visionary as Sue, nor a person so caring and loving. She was the gentle giant of science, and her work will continue to shape research and medicine — and inspire her family, friends, colleagues, students, and postdocs — long into the future.”

An insightful leader with an incomparable perspective on the intersection of academic and commercial medical research, Lindquist served as an elected member of the Johnson & Johnson Board of Directors since 2004, chairing its Science, Technology and Sustainability Committee and sitting on its Regulatory, Compliance and Government Affairs Committee. A biomedical entrepreneur in her own right, she co-founded FoldRx Pharmaceuticals and founded Yumanity Therapeutics and REVOLUTION Medicines.

“Sue’s global reputation in biomedical innovation and entrepreneurial spirit, her courageous leadership and her commitment to teaching are an inspiration for all of us and for generations to come,” says Alex Gorsky, chairman and chief executive officer of Johnson & Johnson. “With her keen perspectives, Sue’s made invaluable contributions to Johnson & Johnson and consistently challenged us to deliver more innovation and enhance our commitment to scientific excellence and to patients worldwide.”

Lindquist received many awards for her extraordinarily productive research, including the President’s National Medal of Science — the highest scientific honor bestowed by the United States — as well as the Dickson Prize in Medicine, the Otto-Warburg Prize, the Genetics Society of America Medal, the FASEB Excellence in Science Award, the Max Delbrück Medal, the Mendel Medal, the E.B. Wilson Medal, a Vallee Visiting Professorship, the Vanderbilt Prize for Women’s Excellence in Science and Mentorship, and the Albany Prize. She was elected as a member of the National Academy of Sciences, the National Academy of Medicine, the American Philosophical Society, the American Academy of Arts and Sciences, and the British Royal Society.

“Sue was not only a superb basic scientist, but also a committed leader,” says Erin O’Shea, president of the Howard Hughes Medical Institute. “She served as a role model for women in science, including me. Sue purposefully worked to mentor numerous students and postdocs, who have since gone on to successful careers. She will be deeply missed.”

Born on June 5, 1949, Lindquist earned an undergraduate degree in microbiology from University of Illinois at Urbana-Champaign and a PhD in biology from Harvard University. She is survived by her husband, Edward Buckbee; two daughters, Alana Buckbee and Nora Buckbee; and Nora’s husband, Christopher Mannion; as well as her brothers and sisters-in-law Alan Lindquist and Stephanie Russell, and John Lindquist and Janice Moore.

Gifts in honor and memory of Susan Lindquist may be made to the Whitehead Institute Fund to Encourage Women in Science (lindquistfund@wi.mit.edu).

Writing for Nature, James Shorter and Aaron Gitler memorialize Prof. Susan Lindquist’s research on protein folding and its role in human disease. They write that Lindquist was “a visionary who connected concepts across disparate disciplines,” adding that her insights, “paved the way for innovative strategies to treat diseases including Alzheimer's, Parkinson's and cancer.”

Prof. Susan Lindquist, who conducted research on yeast in an effort to better understand human disease, died on Oct. 27, writes James Hagerty of The Wall Street Journal. “Her studies of deformed proteins have spurred research that may lead to treatments for certain types of cancer and neurodegenerative diseases, including Alzheimer’s, Parkinson’s and amyotrophic lateral sclerosis."

Bryan Marquard writes for The Boston Globe about Prof. Susan Lindquist, one of the most honored scientists in the nation, who died on Oct. 27. “She did not want to do an experiment unless she thought it would deliver deep biological impact and make a difference to the world,” said Dr. Vikram Khurana of Yumanity Therapeutics.

Prof. Susan Lindquist, a former director of the Whitehead Institute known for her “conceptually daring work with yeast proteins,” died on Oct. 27, writes William Grimes for The New York Times. Her research “demonstrated that protein-folding errors occurred in all species and that biological changes could be passed from one generation to the next through proteins alone.”