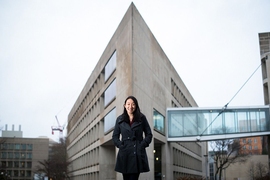 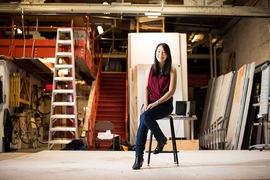 Abra Shen didn’t expect to graduate from MIT with a theater degree, but she couldn’t resist adding theater arts to her major in brain and cognitive sciences when the opportunity presented itself. In fact, while the theater program at MIT has existed for a number of years, she will be MIT’s first official theater arts major.

During the past four years, Shen has pursued both science and theater in equal parts, and whether she is helping cancer patients transition to life after treatment or directing a musical, she does not hesitate to throw herself completely into whatever she is doing.

Shen, who grew up in Toronto, Ontario, was in middle school when she came across a book called Phantoms in the Brain: Probing the Mysteries of the Human Mind that jump-started her interest in neuroscience. In particular, she was fascinated by neuroscientist V. S. Ramachandran’s descriptions of how he cared for patients with neurological diseases.

Shen followed her interest in neuroscience to MIT, where she spent her first two years conducting Alzheimer’s research with Li-Huei Tsai, the Picower Professor of Neuroscience. The Tsai lab uses mouse models to explore the memory areas of the brain, and in one study, her team employed a technique known as optogenetics to inject a light-sensitive virus into neurons in different brain regions of mice including the hippocampus and prefrontal cortex. Once the virus was injected, the neurons could be activated or deactivated by turning a light on or off, resulting in either an improved memory or severe memory loss.

The experience allowed Shen to appreciate the many opportunities MIT undergraduates have to participate in cutting-edge research and technology.

“I think that's a huge benefit of going to a place like MIT,” Shen says. “Professors have great connections and great resources, and are involved at the forefront of what's going on.”

Shen also spent two summers at the Princess Margaret Cancer Centre in Toronto. There, she worked with patients in the Survivorship Centre, which helps cancer patients transition from active treatment to follow-up care. Patients often struggle with this transition, particularly because many of them lack information about what to expect in the coming months.

“We worked on a project to understand the specific needs of testicular and endometrial cancer survivors: what sort of information they were looking for, what information they weren't getting, and what they needed as support to be able to transition into follow-up care and return to their regular lives,” Shen explains.

Shen’s team developed personalized documents called Survivorship Care Plans that patients fill out with their oncologists or nurses so they have an accessible, organized record of all the information they might need.

While Shen appreciates the broad scope of laboratory research, she enjoyed working in a clinical setting where she could directly improve the lives of her patients and have contact with them every day.

“I think it adds a personal touch to what you're doing, and it's a lot more encouraging and motivating when you're able to help the people that you're working with,” she explains.

While at MIT, Shen has also developed a deep commitment to theater arts. Shen was first exposed to MIT’s theater program when, as a high school senior visiting for Campus Preview Weekend, she saw a musical performed by the theater group Next Act.

“I thought it was a great program and that the show was beautiful,” she recalls. “I fell in love and have been involved ever since.”

Shen joined Next Act as a freshman, but it was a directing class during her sophomore year that really changed her perspective on theater. The class, a three-hour workshop, was her first theater class at MIT, and it forced her to challenge herself in new ways.

“That's a period of time where I really grew as an artist, as a person,” she explains. “I became more open, more confident about sharing my own ideas, because I realized, in theater, there's not really a bad idea. Everything can be spun to be seen as really interesting, or really creative, or really different.”

The class motivated Shen to join Dramashop, another theater group on campus, and to pursue theater as her concentration for MIT’s Humanities, Arts, and Social Sciences (HASS) requirement. Her concentration expanded into a minor, which eventually became a full-blown theater arts major.

For Shen, the decision was an obvious one. “I realized that I just wanted to take theater classes forever,” she says. “Theater has been one of the most influential and important experiences that I've had at MIT.”

Experiencing the world beyond MIT

Shen has also had the opportunity to experience different cultures during her time at MIT, through the MIT Science and Technology Initiatives (MISTI) program. As a junior, she spent three weeks over winter break living with a host family in Germany and teaching biology, physics, and chemistry to German high school students. The following summer Shen, who is fluent in French, worked at a cancer center in France, where she shadowed oncologists and conducted research.

“Just being immersed in this totally different environment where people think differently, communicate differently, and the culture and the customs are very different ... it helps you learn about yourself and what is important to you,” Shen says.

After graduating this May, Shen will pursue a degree in medicine, and she hopes to continue working with cancer patients. Shen sees a lot of overlap between medicine and theater, both of which she views as extremely personal fields that focus on understanding people. She also thinks that the communication skills she has developed through theater will help her interact more successfully with her patients and colleagues.

“I think that the approach that you should take to theater and medicine should be similar in that you are there engaging in that activity because it's meaningful to you and because you are emotionally attached to what you're working on,” she explains.

Shen’s ultimate goal is to merge her two interests by exploring how theater therapy can be used to help patients.

“I would love to study how being involved in theater through vocal expression and physical gestures at the same time can affect your self-confidence, your well-being, your motivation, and desire to get out again,” she says.

Right now, however, Shen is focused on the task at hand — directing “The Little Mermaid,” Next Act’s spring musical. She is currently reading through the script and music to prepare for auditions, while grappling with the artistic challenges of staging a play that takes place largely underwater. She is not sure exactly how the play will turn out, but she is excited to see what happens.

“In theater if you're doing what has been done before, that's boring,” she explains. “You always want to be trying new things.”