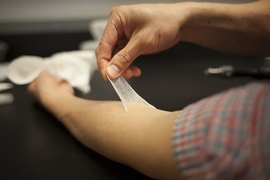 ↓ Download Image
Caption: “It’s an invisible layer that can provide a barrier, provide cosmetic improvement, and potentially deliver a drug locally to the area that’s being treated. Those three things together could really make it ideal for use in humans,” Daniel Anderson says. 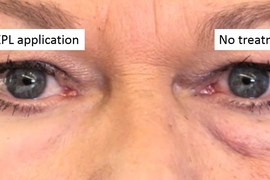 Caption:
“It’s an invisible layer that can provide a barrier, provide cosmetic improvement, and potentially deliver a drug locally to the area that’s being treated. Those three things together could really make it ideal for use in humans,” Daniel Anderson says.
Credits:
Photo: Melanie Gonick/MIT

Scientists at MIT, Massachusetts General Hospital, Living Proof, and Olivo Labs have developed a new material that can temporarily protect and tighten skin, and smooth wrinkles. With further development, it could also be used to deliver drugs to help treat skin conditions such as eczema and other types of dermatitis.

The material, a silicone-based polymer that could be applied on the skin as a thin, imperceptible coating, mimics the mechanical and elastic properties of healthy, youthful skin. In tests with human subjects, the researchers found that the material was able to reshape “eye bags” under the lower eyelids and also enhance skin hydration. This type of “second skin” could also be adapted to provide long-lasting ultraviolet protection, the researchers say.

“It’s an invisible layer that can provide a barrier, provide cosmetic improvement, and potentially deliver a drug locally to the area that’s being treated. Those three things together could really make it ideal for use in humans,” says Daniel Anderson, an associate professor in MIT’s Department of Chemical Engineering and a member of MIT’s Koch Institute for Integrative Cancer Research and Institute for Medical Engineering and Science (IMES).

Anderson is one of the authors of a paper describing the polymer in the May 9 online issue of Nature Materials. Robert Langer, the David H. Koch Institute Professor at MIT and a member of the Koch Institute, is the paper’s senior author, and the paper’s lead author is Betty Yu SM ’98, ScD ’02, former vice president at Living Proof. Langer and Anderson are co-founders of Living Proof and Olivo Labs, and Yu earned her master’s and doctorate at MIT.

Scientists at MIT and elsewhere have developed a new material that can temporarily protect and tighten skin, and smooth wrinkles. With further development, it could also be used to deliver drugs to help treat various skin conditions.

As skin ages, it becomes less firm and less elastic — problems that can be exacerbated by sun exposure. This impairs skin’s ability to protect against extreme temperatures, toxins, microorganisms, radiation, and injury. About 10 years ago, the research team set out to develop a protective coating that could restore the properties of healthy skin, for both medical and cosmetic applications.

“We started thinking about how we might be able to control the properties of skin by coating it with polymers that would impart beneficial effects,” Anderson says. “We also wanted it to be invisible and comfortable.”

The researchers created a library of more than 100 possible polymers, all of which contained a chemical structure known as siloxane — a chain of alternating atoms of silicon and oxygen. These polymers can be assembled into a network arrangement known as a cross-linked polymer layer (XPL). The researchers then tested the materials in search of one that would best mimic the appearance, strength, and elasticity of healthy skin.

The best-performing material has elastic properties very similar to those of skin. In laboratory tests, it easily returned to its original state after being stretched more than 250 percent (natural skin can be elongated about 180 percent). In laboratory tests, the novel XPL’s elasticity was much better than that of two other types of wound dressings now used on skin — silicone gel sheets and polyurethane films.

“Creating a material that behaves like skin is very difficult,” says Barbara Gilchrest, a dermatologist at MGH and an author of the paper. “Many people have tried to do this, and the materials that have been available up until this have not had the properties of being flexible, comfortable, nonirritating, and able to conform to the movement of the skin and return to its original shape.”

The XPL is currently delivered in a two-step process. First, polysiloxane components are applied to the skin, followed by a platinum catalyst that induces the polymer to form a strong cross-linked film that remains on the skin for up to 24 hours. This catalyst has to be added after the polymer is applied because after this step the material becomes too stiff to spread. Both layers are applied as creams or ointments, and once spread onto the skin, XPL becomes essentially invisible.

The researchers performed several studies in humans to test the material’s safety and effectiveness. In one study, the XPL was applied to the under-eye area where “eye bags” often form as skin ages. These eye bags are caused by protrusion of the fat pad underlying the skin of the lower lid. When the material was applied, it applied a steady compressive force that tightened the skin, an effect that lasted for about 24 hours.

In another study, the XPL was applied to forearm skin to test its elasticity. When the XPL-treated skin was distended with a suction cup, it returned to its original position faster than untreated skin.

“I think it has great potential for both cosmetic and noncosmetic applications, especially if you could incorporate antimicrobial agents or medications,” says Thahn Nga Tran, a dermatologist and instructor at Harvard Medical School, who was not involved in the research.

Living Proof has spun out the XPL technology to Olivo Laboratories, LLC, a new startup formed to focus on the further development of the XPL technology. Initially, Olivo’s team will focus on medical applications of the technology for treating skin conditions such as dermatitis.

Other authors of the paper include Fernanda Sakamoto and Rox Anderson of MGH; Soo-Young Kang of Living Proof; Morgan Pilkenton and Alpesh Patel, formerly of Living Proof; and Ariya Akthakul, Nithin Ramadurai, and Amir Nashat ScD ’03, of Olivo Laboratories.

CNN’s Jareen Imam writes that MIT researchers have developed a new topical solution that can make wrinkles invisible and could potentially deliver medications to the skin. "We hope this can be used for many different things," explains Prof. Daniel Anderson. "For example, if you need it for a large area of skin you might put it on like sunscreen."

A new material developed by MIT researchers could assist with everything from tightening wrinkles to delivering medication to the skin, reports Enjoli Francis for ABC News. Prof. Robert Langer explains that the material is invisible and “conforms to the skin. You can use it to deliver a drug, if you want, and it's mechanically quite strong."

CBS This Morning highlights the “second skin” material developed by MIT researchers that can help tighten wrinkles and protect the skin. CBS News medical contributor Dr. David Agus says that the material is “really an amazing work in chemical engineering,” highlighting how the material could be used to deliver medication to the skin.

FOX 25 reports on the new polymer developed by MIT researchers that can smooth wrinkles and could one day potentially deliver medications to the skin. The material is a “‘silicone-based polymer’ that acts as a kind of ‘second skin,’ and could be used to provide protection from the sun.”

BBC News reporter Michelle Roberts writes that MIT researchers have developed a new material that can hide wrinkles and could eventually be used to deliver medicines and sun protection. The researchers found that skin “coated with the polymer was more elastic than skin without the film. And, to the naked eye, it appeared smoother, firmer and less wrinkly.”

Prof. Robert Langer speaks with Scientific American reporter Gary Stix about the material he and his colleagues developed that can tighten skin and deliver medications. Langer explains that the material is an “ointment that you can apply very easily but then the way we've set up the chemistry, it actually hardens and becomes almost like an invisible Band-Aid.”

MIT researchers have developed a transparent, silicon-based polymer that can protect skin from sun damage and smooth out wrinkles, writes Amina Khan for The Los Angeles Times. Prof. Robert Langer explains that users of the material will “hardly know that it’s on. It sort of conforms to the skin.”

Washington Post reporter Rachel Feltman writes about the new “second skin” material developed by MIT researchers. The researchers found that the new material “could actually find its best use in patients with severe skin problems like eczema or psoriasis, which can both cause extremely dry and itchy skin.”

MIT researchers have developed a new material that can smooth wrinkles, protect skin from sun damage, and could one day even administer medications, reports Mark Elizabeth Dallas for CBS News. Dallas explains that “the polymer may be applied directly to the skin as an undetectable thin coating, which mimics the properties of healthy, young skin.”

A new material developed by MIT researchers can help smooth wrinkles, protect the skin from sun damage and could one day even administer medications, reports Gina Kolata for The New York Times. “We made literally hundreds of polymers,” explains Prof. Robert Langer. “We were looking for safety, spreadability, adherence, and the right kind of mechanical and optical properties.”

Beauty business based on MIT bioengineering