During a mid-March snowstorm, researchers from MIT Lincoln Laboratory achieved real-time, nighttime, centimeter-level vehicle localization while driving a test vehicle at highway speeds over roads whose lane markings were hidden by the snow. The sport utility vehicle used in the demonstration was equipped with a system that employs a novel ground-penetrating radar technique to localize the vehicle to within centimeters of the boundaries of its lane. The technique could solve one of the problems limiting the development and adoption of self-driving vehicles: How can a vehicle navigate to stay within its lane when bad weather obscures road markings?

"Most self-localizing vehicles use optical systems to determine their position," explains Byron Stanley, the lead researcher on Lincoln Laboratory’s localizing ground-penetrating radar (LGPR) program. "They rely on optics to 'see' lane markings, road surface maps, and surrounding infrastructure to orient themselves. Optical systems work well in fair weather conditions, but it is challenging, even impossible, for them to work when snow covers the markings and surfaces or precipitation obscures points of reference." 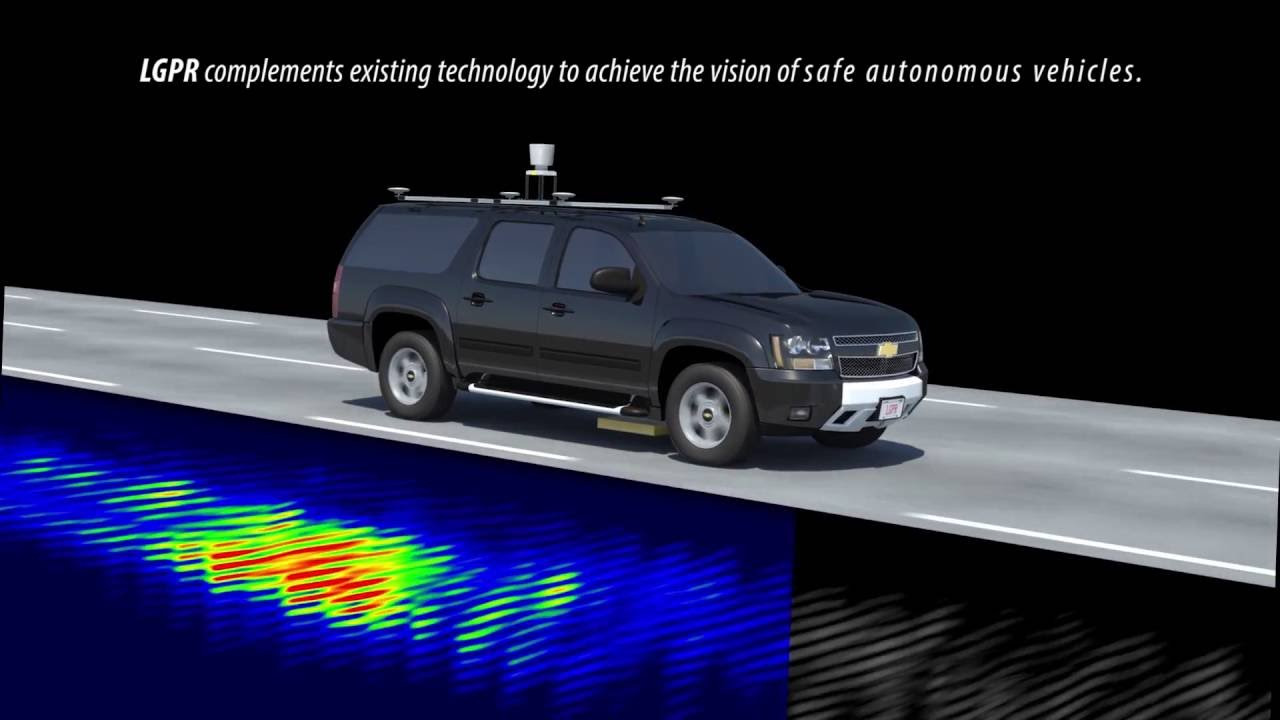 Play video
The MIT Lincoln Laboratory localizing ground-penetrating radar demonstrated centimeter-level localization on snow-covered roads during daytime and nighttime snowstorms. This system enhances an autonomous vehicle’s ability to know its position on a roadway even when other approaches fail.

The laboratory has developed a sensor that uses very high frequency (VHF) radar reflections of underground features to generate a baseline map of a road's subsurface. This map is generated during an LGPR-equipped vehicle's drive along a roadway and becomes the reference for future travels over that stretch of road. On a revisit, the LGPR mounted beneath the vehicle measures the current reflections of the road's subsurface features, and its algorithm estimates the vehicle's location by comparing those current GPR readings to the baseline map stored in the system's memory. An article titled "Localizing Ground Penetrating RADAR: A Step Toward Robust Autonomous Ground Vehicle Localization" in a recent issue of the Journal of Field Robotics describes Lincoln Laboratory's demonstration of the use of LGPR to achieve 4-cm (1.6-inch) in-lane localization accuracy at speeds up to 60 miles per hour.

"The LGPR uses relatively deep subsurface features as points of reference because these features are inherently stable and less susceptible to the dynamics of the world above," Stanley says. Surface characteristics, such as lane striping, signs, trees, or the landscape, are dynamic; they are changed or change over time. The natural inhomogeneity in the highly static subterranean geology — for example, differences in soil layers or rock beds — dominates the GPR reflection profiles. The GPR-produced map of the subsurface environment is a fairly complete picture, capturing every distinct object and soil feature that is not significantly smaller than a quarter of a wavelength.

The LGPR's main component is a waterproof, closely spaced 12-element antenna array that uses a very high frequency, stepped-frequency continuous wave to penetrate deeper beneath the ground than can typical GPR systems. This deeper look allows the LGPR to map the most stable, thus reliable, subsurface characteristics. "The GPR array is designed so that measurements from each element look similar and thus can be compared with others on subsequent passes," Stanley says. A single-board computer is used to correlate the GPR data into a three-dimensional GPS-tagged GPR map and extract a corrected GPS position estimate.

The researchers who conducted the March test runs — Stanley, Jeffrey Koechling, and Henry Wegiel — alternated driving over a route in the Boston area during a snowstorm from midnight to 9 a.m. Correlation and overlap estimates demonstrated that the LGPR technique could accurately, and repeatedly, determine the vehicle's position as it traveled. Post-processing methods on a sensor suite were then used to provide estimates of the accuracy of the system. "We thought the radar would see through snow, but it was wonderful to finally get the data proving it," Koechling says.

The reliance on static underground features is LGPR's advantage as a complement to other localization methods, even in fair weather conditions. The use of a subsurface map reduces the need for continual modifications to high-resolution road maps. Fusing GPS, lidar, camera, and LGPR results yields a system that can accurately localize even when one of the sensing modes fails. This "fail-safe" capability will be necessary to the development of dependable autonomous vehicles that can handle demanding ground environments. Autonomous vehicles are outfitted with a range of sensors, such as cameras, radar, and lidar systems, that collect data to enable necessary capabilities — for example, localizing, judging distances, and detecting obstacles. The inclusion of an LGPR system to the sensor suite increases the ability of the vehicle to reliably know its position even when lane markings are hidden by snow, signs and landmarks have moved, and GPS signals are unavailable.

Currently, Lincoln Laboratory is working to explore all-weather, GPS-denied, and mapping capabilities. LGPR maps may be useful in helping federal, state, and local governments know when roads and bridges are in need of maintenance. Uses of LGPR for indoor and underground navigation, such as in mining, also remain to be explored. Because of LGPR's wide range of uses and demonstrated accurate localization in snowstorms, it's likely that your self-driving car of the future will be equipped with a ground-penetrating radar.