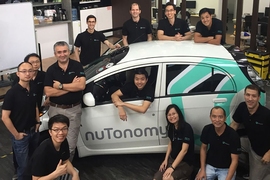 ↓ Download Image
Caption: The nuTonomy team, including Emilio Frazzoli (third from left, standing), with one of their driverless cars

Caption:
The nuTonomy team, including Emilio Frazzoli (third from left, standing), with one of their driverless cars
Credits:
Courtesy of nuTonomy

An exciting “driverless race” is underway among tech giants the United States: In recent months, Google, Uber, and Tesla have made headlines for developing self-driving taxis for big cities.

But a comparatively small MIT spinout, nuTonomy, has entered the race somewhat under the radar. The startup is developing a fleet of driverless taxis to serve as a more convenient form of public transit while helping reduce greenhouse gas emissions in the densely populated city-state of Singapore.

“This could make car-sharing something that is almost as convenient as having your own private car, but with the accessibility and cost of public transit,” says nuTonomy co-founder and chief technology officer Emilio Frazzoli, an MIT professor of aeronautical and astronautical engineering.

The startup’s driverless taxis follow optimal paths for picking up and dropping off passengers to reduce traffic congestion. Without the need to pay drivers, they should be cheaper than Uber and taxis. These are also electric cars, manufactured through partnerships with automakers, which produce lower levels of greenhouse gas emissions than conventional vehicles do.

Last week, nuTonomy “passed [its] first driving test” in Singapore, Frazzoli says — meaning its driverless taxis navigated a custom obstacle course, without incident. Now, nuTonomy is in the process of getting approval for on-road testing in a business district, called One North, designated for autonomous-vehicle testing. In a few years, Frazzoli says, nuTonomy aims to deploy thousands of driverless taxis in Singapore. The company will act as the service provider to maintain the vehicles and determine when and how they can be operated safely.

But a big question remains: Will driverless taxis put public-transit operators out of work? In Singapore, Frazzoli says, that’s unlikely. “In Singapore, they want to have more buses, but they cannot find people to drive buses at night,” he says. “Robotics will not put these people out of jobs — it will provide more capacity and support that’s needed.”

Importantly, Frazzoli adds, driverless-taxi services used for public transit, such as nuTonomy’s, could promote wider use of electric cars, as consumers won’t need to purchase the expensive cars or worry about finding charging stations. This could have a major impact on the environment: A 2015 study published in Nature Climate Change found that by 2030 autonomous taxis — specifically, more efficient hybrid and electric cars — used worldwide could produce up to 94 percent less greenhouse gas emission per mile than conventional taxis.

Behind the (autonomous) wheel

Frazzoli can’t really say how nuTonomy’s taxis may compare to the likes of Google, Uber, or Tesla, as their technology remains secretive. But nuTonomy’s software — based on research by Frazzoli, nuTonomy’s CEO Karl Iagnemma PhD ’01, and others — includes a few key innovations, he says.

One such innovation is advanced fleet management, derived from Frazzoli’s previous work writing algorithms to coordinate swarms of drones for the U.S. military. Using similar concepts, Frazzoli, Iagnemma, and nuTonomy’s engineers designed algorithms to allow the minimal number of cars to cart people around a city, alleviating traffic congestion and reducing emissions. In a 2014 paper published in Road Vehicle Automation, Frazzoli and colleagues estimated that 300,000 driverless taxis, in theory, could do the work of the 780,000 privately owned cars currently operating today in Singapore, while keeping waiting times below 15 minutes.

“That’s a 60 percent reduction in the number of vehicles operating in Singapore,” Frazzoli says. “This was a big sign of impact for [the Singaporean] government. At first we were asking them to let us test cars there — then they were asking us to come test.”

The algorithms also function through a “formal logic” that tells the taxis when low-priority “rules of the road” can be broken safely to drive flexibly and efficiently. For example, when driving around a double-parked car, with no oncoming cars, the taxi will see it’s not violating the most important rule — not hitting another object — and pass, Frazzoli says. “These are situations we encounter everyday, and we use our judgment to understand the rules we can violate,” Frazzoli says. “We have these same judgments embedded in our algorithms. … That allows us to exhibit complex behavior and respond in correct way in very many and very complicated scenarios.”

Additionally, Frazzoli says nuTonomy uses LIDAR data in a way that provides more accurate localization — that is, determining where the car is within its environment. All autonomous cars use LIDAR for object detection, but nuTonomy’s system, he says, localizes by detecting not only objects on the road but also stationary objects all around the car. “Even though stuff at road level can change all the time — you can have a car parked here or not, for example — a building is going to stay put,” Frazzoli says.

This has proven beneficial in difficult conditions for driverless cars to navigate. Last year, Frazzoli says nuTonomy successfully tested its vehicles in Michigan, where heavy snow caused whiteout conditions. “There was nothing [visible] on the ground, but who cares — the car was looking at the buildings” for localization, he says.

NuTonomy’s core technology and its connections with Singapore trace back about a decade at MIT. In 2006, Frazzoli joined an MIT team developing an autonomous vehicle for a Defense Advanced Research Projects Agency grant. In 2009, he joined the Singapore-MIT Alliance for Research and Technology (SMART) Future of Urban Mobility project with aims of developing driverless taxis for Singapore.

Over the years, Frazzoli helped develop and test driverless golf carts in a Singaporean public garden through SMART, and teamed up with Iagnemma, who is a principal research scientist in MIT’s Department of Mechanical Engineering and the director of MIT’s Robotic Mobility Group, on other autonomous-vehicle projects. Both Frazzoli and Iagnemma also spent years lecturing far and wide about the benefits of driverless cars, to researchers and automakers.

“But no one was paying attention,” Frazzoli says. “So we figured we need to [develop driverless cars] ourselves.”

In 2013, they launched nuTonomy as an autonomous-car consulting service, before pivoting to a full-fledged autonomous taxi service provider for Singapore last year.

But focusing on Singapore instead of the United States wasn’t just about Frazzoli’s strong ties there: “[Singapore is] concerned with reducing congestion and trying to get the public to use public transportation as much as possible,” Frazzoli says. “At the same time, they’re facing an increase in population by 30 percent within 20 years or so. You cannot keep buying more buses and digging more subway lines. [Singapore] sees [driverless taxis] as a critical vision for their future.”

While developing its driverless taxi fleet, nuTonomy has bootstrapped through small contract projects for automakers. For Jaguar Land Rover, for instance, nuTonomy is developing an autonomous parking feature that will drop off a rider at, say, a shopping center and find its own spot in the parking lot. Such gigs have helped the company grow to 25 employees in Cambridge and Singapore offices, build relationships with the auto industry, and further develop its own software. “Before we get cars driving on the road, we need to be able to park,” Frazzoli says.

As nuTonomy’s driverless taxis in Singapore start getting noticed — along with the those by Google, Uber, and Tesla — Frazzoli anticipates politicians and the public will see the benefits of the technology. “As soon as people start seeing this is real and this is working, and this is the benefit it can provide to the public, then … people will start seeing that this can provide a solution to the mobility problem in big urban centers,” Frazzoli says.

Wall Street Journal reporter Tim Higgins writes that nuTonomy, an MIT startup, will begin testing driverless cars in Boston by the end of the year.  The tests in Boston will help the company “sharpen its software’s ability to recognize signage and road markings and gain experience with the complexities of urban driving,” Higgins explains.

Brian Fung writes for The Washington Post that MIT spinoff nuTonomy has launched a self-driving car service in Singapore. Following nuTonomy’s pilot program in Singapore “the company may be able to quickly transfer what it learns to other places where it's currently conducting studies, such as London and Michigan,” suggests Fung.

NuTonomy, an MIT spinoff, is testing a self-driving taxi service in Singapore, writes Jeevan Vasagar for the Financial Times. “The trial represents an extraordinary opportunity to collect feedback from riders in a real-world setting,” says MIT research scientist and NuTonomy co-founder Karl Iagnemma.

Prof. Emilio Frazzoli speaks with Nicole Dungca of The Boston Globe about his new startup nuTonomy, which is developing a fleet of driverless taxis for Singapore. Frazzoli explains that he feels the biggest impact of autonomous vehicles is in “really changing the way we think of personal mobility, or mobility, in general.”

Fortune reporter Robert Hackett writes that MIT spinoff nuTonomy is developing a fleet of driverless taxis for Singapore. Hackett writes that the company “could become the first to operate fully self-driving cars, known as ‘level four,’ in a city commercially.”

MIT startup nuTonomy is developing driverless taxis to serve as a form of public transit in Singapore, reports Nyshka Chandran for CNBC. “The driverless taxis will follow optimal paths for picking up and dropping off passengers to reduce traffic congestion,” Chandran explains.

A Global Collaboration to Chart the Future of Urban Mobility