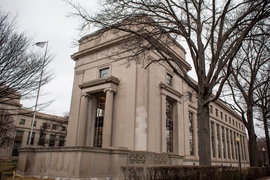 ↓ Download Image
Caption: “The Main Group is one of the most important historic architectural facilities in Cambridge,” says Richard Amster, MIT’s director of campus construction. “We had to preserve or mimic the original appearance.” 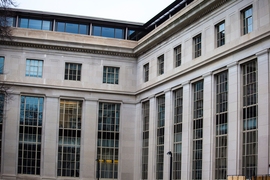 ↓ Download Image
Caption: Building 2, which houses the mathematics department, includes the largest installation of a new kind of ultra-efficient window ever carried out in the United States.

Caption:
“The Main Group is one of the most important historic architectural facilities in Cambridge,” says Richard Amster, MIT’s director of campus construction. “We had to preserve or mimic the original appearance.”
Credits:
Photo: Jose-Luis Olivares/MIT

Caption:
Building 2, which houses the mathematics department, includes the largest installation of a new kind of ultra-efficient window ever carried out in the United States.
Credits:
Photo: Jose-Luis Olivares/MIT

Caption:
In the left side of the infrared image, the existing windows are single-pane glass and are conducting heat to the outdoor environment. In the right side of the image, the replacement window consisting of vacuum-insulated glass is conducting very little heat to the outdoor environment. The darker color indicates very thermal transfer, and the lighter color indicates a large level of thermal transfer.

The MIT campus Main Group buildings, which celebrate their 100th anniversary this year, were a marvel of modern construction when they were designed and built a century ago. But some things have changed in the ensuing decades, including an increased awareness of the need for energy efficiency in a world facing climate change. Fortunately, technology has also advanced during that time, making feasible a highly efficient retrofit of the old buildings.

Not that such improvements, including replacement of the soaring and architecturally impressive windows in this complex of neoclassical buildings that frame MIT’s main dome, is an easy task. In fact, the newly completed first stage of renovation — entailing a complete restoration of Building 2, which houses the Department of Mathematics — includes the largest installation of a new kind of ultra-efficient window ever carried out in the United States.

The process, starting with a detailed investigation of the building’s original design and construction methods and materials, and a search for possible replacements, began a decade ago, explains Gary Tondorf-Dick, program manager for capital projects in MIT’s Department of Facilities, who was a key advisor on the project. Replacing the historically important windows, which in many places soar three stories high, is not something that can be done with a quick trip to the nearest home-improvement store.

Although they provide good insulation, modern double-paned windows are much thicker and heavier than the original single-pane windows, which sit in custom-made metal frames, Tondorf-Dick says. Using today’s conventional windows would have required a drastic redesign and re-engineering of the whole support structure — and still would have resulted in a noticeable change in the appearance of the buildings, which are protected as historical structures.

“The Main Group is one of the most important historic architectural facilities in Cambridge,” says Richard Amster, MIT’s director of campus construction. “We had to preserve or mimic the original appearance.”

In addition, conventional double-pane windows only maintain their improved efficiency for about a decade before the inert gas between the panes, typically argon or krypton, leaks away. It took a lot of searching to find a viable alternative, but it turned out that one did exist: a new kind of double-pane window, called Nippon Spacia, developed by a Japanese company and based on an invention by Richard Collins, a professor of engineering in Australia. These windows provide a thin profile that fits the dimensions of the existing frames, and they promise decades of durability. They also have an insulating ability that is more than double that of the best argon-filled windows, he says.

Instead of inert gas, the new windows feature a vacuum in between the two panes, which are much closer together than the panes in conventional windows. The whole assembly is thin enough to fit into new metal frames designed to match the century-old originals. And whereas the flexible, petroleum-based sealing material that is conventionally applied at the edges can degrade over time, the two panes are welded together with glass that’s as durable as the panes themselves. These windows “will last 50 to 75 years,” Amster says.

Even though no further restorations of this scale have yet been scheduled for the Main Group, in doing the research and planning for the Building 2 restoration “we wanted to take a representative area” of that million-square-foot complex, to demonstrate an approach that could work for all of it, says Tondorf-Dick. The idea was to develop a set of standards for the renovations, he says, that would carry the buildings forward for at least another century.

The renovations went far beyond the windows, though that was one of the major challenges. In addition, repairs were needed on parts of the exterior limestone cladding that covers a structure whose shell is built from reinforced concrete and steel. That was a very modern and unusual construction method for the 1916 buildings and one which has helped them stand the test of time, allowing for a great deal of flexibility in rearranging the interior labs, offices, and classroom over the years.

In fact, many of the repairs needed to the exterior have nothing to do with the original construction, but rather deal with cracking that resulted from repairs back in the 1960s, Tondorf-Dick says. At that time, instead of replacing sections of missing mortar with the kind of flexible material used originally, a stiffer, rigid mortar that was thought at the time to provide greater durability was used. That mortar was so inflexible that it left only the limestone itself to crack in response to any shifting or thermal expansion of the walls, he says. In the new renovations, they returned to materials similar to those used originally.

The structure of the buildings could last for centuries, says Tondorf-Dick, thanks to that concrete-shell construction method, which was borrowed from huge industrial buildings rather than typical academic buildings in that era. But parts of the buildings, including windows, heating, and ventilation, and even interior walls, may need repairs and maintenance work every few decades, he says.

The Building 2 renovations also included one major new addition: A whole new fourth floor was added to the building, with its exterior walls set back somewhat from the main walls of the building, so that it is almost unnoticeable from ground level – an important consideration for such historic buildings. In fact, the project on the Building 2 rooftop addition and creative adaptation of interior spaces was recently honored with a preservation award from the Cambridge Historical Commission.

Overall, the renovations have proved to both work well and appeal to the building’s occupants, who are enjoying greater comfort and new, expanded interior spaces. “My hope is that we can take this model and expand it to the rest of the Main Group,” Amster says.

Department of Mathematics returns to Building 2