Why working the night shift can pose a cancer risk 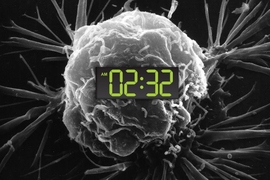 ↓ Download Image
Caption: In humans and most other organisms, a circadian clock governed by light regulates the timing of key aspects of human physiology, by controlling cellular activities such as metabolism and division.

Caption:
In humans and most other organisms, a circadian clock governed by light regulates the timing of key aspects of human physiology, by controlling cellular activities such as metabolism and division.
Credits:
Image: National Cancer Institute, Christine Daniloff/MIT

A handful of large studies of cancer risk factors have found that working the night shift, as nearly 15 percent of Americans do, boosts the chances of developing cancer. MIT biologists have now found a link that may explain this heightened risk.

In humans and most other organisms, a circadian clock governed by light regulates the timing of key aspects of human physiology, by controlling cellular activities such as metabolism and division. In a study of mice, the MIT team found that two of the genes that control cells’ circadian rhythms also function as tumor suppressors.

Loss of these tumor suppressors, either through gene deletion or disruption of the normal light/dark cycle, allows tumors to become more aggressive.

“It doesn’t matter how you disrupt the clock — both ways, loss of it seems to drive tumorigenesis,” says Thales Papagiannakopoulos, a former postdoc at MIT’s Koch Institute for Integrative Cancer Research and the lead author of the study, which appears in the July 28 issue of Cell Metabolism.

Tyler Jacks, director of the Koch Institute and the David H. Koch Professor of Biology, is the paper’s senior author.

In humans, the central circadian clock is located in the brain’s suprachiasmatic nucleus (SCN), which receives information about light levels from the retina. The SCN communicates this information to cells in the body through hormones and other signaling molecules.

Within cells, a gene called Bmal1 is responsible for turning on other genes that control circadian activities, including one called Per2. Levels of the proteins encoded by these genes normally oscillate throughout the day, but when normal light/dark cycles are disrupted, those oscillations disappear.

“Cells need the light cue, which is like a reset button for the clock. When you lose that cue, you lose the normal rhythms in every cell in your body,” says Papagiannakopoulos, who is now an assistant professor of pathology at New York University School of Medicine.

He and his colleagues set out to investigate a possible link between cancer and these genes, in mice that are genetically engineered to develop a type of lung cancer known as non-small cell lung cancer.

They began by exposing the mice to two different light/dark schedules. One group of mice lived with a normal schedule of 12 hours of light followed by 12 hours of darkness, while the other mice went onto a “jet lag” schedule: Every two to three days, they were exposed to an additional eight hours of light. This mimics the biological clock disruption that occurs when humans work night shifts or travel through multiple time zones.

Under the jet lag scenario, tumors grew faster and were more aggressive than those in the mice living with a normal light/dark schedule.

In their next set of experiments, the researchers kept the mice on a normal light/dark schedule but knocked out the genes for Bmal1 and Per2. In those mice, tumors grew faster, just as they did under the jet lag scenario.

“If you disrupt these genes in every cell of the body, the light cues that you normally receive do not apply,” Papagiannakopoulos says. “It’s a way of taking a molecular hammer and just breaking this clock.”

Bmal1 and Per2 control the timing of production of a cancer-promoting protein known as c-myc, so when those genes are disrupted, c-myc begins to accumulate, spurring an increase in cell metabolism and proliferation.

Joseph Takahashi, chair of the Department of Neuroscience at the University of Texas Southwestern Medical Center, says the study offers an important link between cancer and circadian clock dysfunction.

“This work is very clear and definitive,” says Takahashi, who was not involved in the research. “That’s what we need to really show that the circadian clock may have implications for cancer and tumor progression.”

The MIT researchers also analyzed human lung tumor samples and found much lower levels of Bmal1 and Per2 gene expression, as well as other key circadian clock genes, in the tumors than in normal lung tissue from the same patients. The most aggressive tumors had even lower levels of those genes.

Papagiannakopoulos is now investigating whether cancer cells that have a broken clock, for example through loss of Bmal1 and Per2, have any weaknesses that could be exploited as potential drug targets. He also plans to study how circadian disruptions affect other types of cancers, including pancreatic cancer.