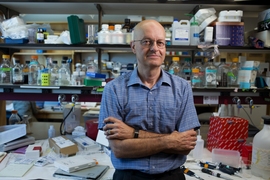 Human sleeping and waking patterns are largely governed by an internal circadian clock that corresponds closely with the 24-hour cycle of light and darkness. This circadian clock also controls other body functions, such as metabolism and temperature regulation.

Studies in animals have found that when that rhythm gets thrown off, health problems including obesity and metabolic disorders such as diabetes can arise. Studies of people who work night shifts have also revealed an increased susceptibility to diabetes.

A new study from MIT shows that a gene called SIRT1, previously shown to protect against diseases of aging, plays a key role in controlling these circadian rhythms. The researchers found that circadian function decays with aging in normal mice, and that boosting their SIRT1 levels in the brain could prevent this decay. Conversely, loss of SIRT1 function impairs circadian control in young mice, mimicking what happens in normal aging. 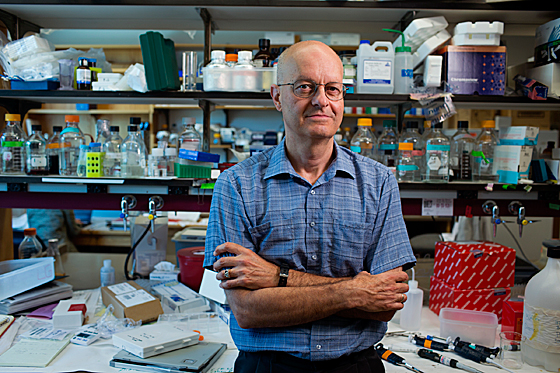 Since the SIRT1 protein itself was found to decline with aging in the normal mice, the findings suggest that drugs that enhance SIRT1 activity in humans could have widespread health benefits, says Leonard Guarente, the Novartis Professor of Biology at MIT and senior author of a paper describing the findings in the June 20 issue of Cell.

“If we could keep SIRT1 as active as possible as we get older, then we’d be able to retard aging in the central clock in the brain, and health benefits would radiate from that,” Guarente says.

In humans and animals, circadian patterns follow a roughly 24-hour cycle, directed by the circadian control center of the brain, called the suprachiasmatic nucleus (SCN), located in the hypothalamus.

“Just about everything that takes place physiologically is really staged along the circadian cycle,” Guarente says. “What’s now emerging is the idea that maintaining the circadian cycle is quite important in health maintenance, and if it gets broken, there’s a penalty to be paid in health and perhaps in aging.”

Last year, Guarente found that a robust circadian period correlated with longer lifespan in mice. That got him wondering what role SIRT1, which has been shown to prolong lifespan in many animals, might play in that phenomenon. SIRT1, which Guarente first linked with aging more than 15 years ago, is a master regulator of cell responses to stress, coordinating a variety of hormone networks, proteins and genes to help keep cells alive and healthy.

To investigate SIRT1’s role in circadian control, Guarente and his colleagues created genetically engineered mice that produce different amounts of SIRT1 in the brain. One group of mice had normal SIRT1 levels, another had no SIRT1, and two groups had extra SIRT1 — either twice or 10 times as much as normal.

In mice with normal SIRT1 levels, the researchers confirmed previous findings that when the 12-hour light/dark cycle is interrupted, younger mice readjust their circadian cycles much more easily than older ones. However, they showed for the first time that mice with extra SIRT1 do not suffer the same decline in circadian control as they age.

The researchers also found that SIRT1 exerts this control by regulating the genes BMAL and CLOCK, the two major keepers of the central circadian clock.

A growing body of evidence suggests that being able to respond to large or small disruptions of the light/dark cycle is important to maintaining healthy metabolic function, Guarente says.

“Essentially we experience a mini jet lag every day because the light cycle is constantly changing. The critical thing for us is to be able to adapt smoothly to these jolts,” Guarente says. “Many studies in mice say that while young mice do this perfectly well, it’s the old mice that have the problem. So that could well be true in humans.”

If so, it could be possible to treat or prevent diseases of aging by enhancing circadian function — either by delivering SIRT1 activators in the brain or developing drugs that enhance another part of the circadian control system, Guarente says.

“I think we should look at every aspect of the machinery of the circadian clock in the brain, and any intervention that can maintain that machinery with aging ought to be good,” he says. “One entry point would be SIRT1, because we’ve shown in mice that genetic maintenance of SIRT1 helps maintain circadian function.”

Some SIRT1 activators are now being tested against diabetes, inflammation and other diseases, but they are not designed to cross the blood-brain barrier and would likely not be able to reach the SCN. However, Guarente believes it could be possible to design SIRT1 activators that can get into the brain.

Roman Kondratov, an associate professor of biology at Cleveland State University, says the study raises several exciting questions regarding the potential to delay or reverse age-related changes in the brain through rejuvenation of the circadian clock with SIRT1 enhancement.

“The importance of this study is that it has both basic and potentially translational applications, taking into account the fact that pharmacological modulators of SIRT1 are currently under active study,” Kondratov says.

Researchers in Guarente’s lab are now investigating the relationship between health, circadian function and diet. They suspect that high-fat diets might throw the circadian clock out of whack, which could be counteracted by increased SIRT1 activation.

The research was funded by the National Institutes of Health and the Glenn Foundation for Medical Research.