Protein that boosts longevity may protect against diabetes 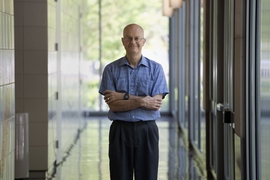 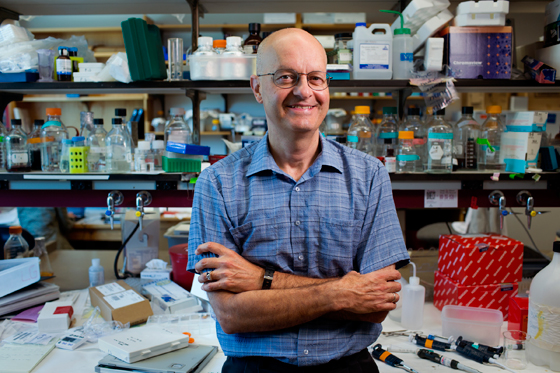 A protein that slows aging in mice and other animals also protects against the ravages of a high-fat diet, including diabetes, according to a new MIT study.

MIT biology professor Leonard Guarente ’74 discovered SIRT1’s longevity-boosting properties more than a decade ago and has since explored its role in many different body tissues. In his latest study, appearing in the Aug. 8 print edition of the journal Cell Metabolism, he looked at what happens when the SIRT1 protein is missing from adipose cells, which make up body fat.

“We see them as being poised for metabolic dysfunction,” says Guarente, the Novartis Professor of Biology at MIT. “You’ve removed one of the safeguards against metabolic decline, so if you now give them the trigger of a high-fat diet, they’re much more sensitive than the normal mouse.”

The finding raises the possibility that drugs that enhance SIRT1 activity may help protect against obesity-linked diseases.

Guarente first discovered the effects of SIRT1 and other sirtuin proteins while studying yeast in the 1990s. Since then, these proteins have been shown to coordinate a variety of hormonal networks, regulatory proteins and other genes, helping to keep cells alive and healthy.

In recent years, Guarente and his colleagues have deleted the gene from organs such as brain and liver to pinpoint its effects more precisely. Their previous work has revealed that in the brain, SIRT1 protects against the neurodegeneration seen in Alzheimer’s, Huntington’s and Parkinson’s diseases.

SIRT1 is a protein that removes acetyl groups from other proteins, modifying their activity. The possible targets of this deacetylation are numerous, which is likely what gives SIRT1 its broad range of protective powers, Guarente says.

In the Cell Metabolism study, the researchers analyzed the hundreds of genes that were turned on in mice lacking SIRT1 but fed a normal diet, and found that they were almost identical to those turned on in normal mice fed a high-fat diet.

This suggests that in normal mice, development of metabolic disorders is a two-step process. “The first step is inactivation of SIRT1 by the high-fat diet, and the second step is all the bad things that follow that,” Guarente says.

The researchers investigated how this occurs and found that in normal mice given a high-fat diet, the SIRT1 protein is cleaved by an enzyme called caspase-1, which is induced by inflammation. It’s already known that high-fat diets can provoke inflammation, though it’s unclear exactly how that happens, Guarente says. “What our study says is that once you induce the inflammatory response, the consequence in the fat cells is that SIRT1 will be cleaved,” he says.

That finding “provides a nice molecular mechanism to understand how inflammatory signals in adipose tissue could lead to rapid derangement of metabolic tissue,” says Anthony Suave, an associate professor of pharmacology at Weill Cornell Medical College, who was not part of the research team.

Drugs that target that inflammatory process, as well as drugs that enhance sirtuin activity, might have some beneficial therapeutic effect against obesity-related disorders, Suave says.

The researchers also found that as normal mice aged, they were more susceptible to the effects of a high-fat diet than younger mice, suggesting that they lose the protective effects of SIRT1 as they age. Aging is known to increase inflammation, so Guarente is now studying whether that age-related inflammation also provokes SIRT1 loss.

This research was funded by the National Institutes of Health, the Glenn Foundation for Medical Research and the American Heart Association.