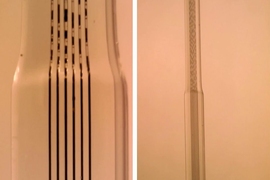 ↓ Download Image
Caption: These micrographs show the fibers embedded in polymer and demonstrate how the fibers break apart into segments when they are stretched out in the cold-drawing process.
Credits: Courtesy of the researchers

Caption:
These micrographs show the fibers embedded in polymer and demonstrate how the fibers break apart into segments when they are stretched out in the cold-drawing process.
Credits:
Courtesy of the researchers

An interdisciplinary team of researchers enabled by the National Science Foundation-funded Materials Research Science and Engineering Centers (MRSEC) program has developed a way to break fibers or sheets of material into many tiny, almost perfectly uniform segments or strips. The method can work on plastics, metals, glasses, and even natural materials such as silk or hair, producing sectioned particles ranging in size from nanoparticles to ones that can be handled and easily seen with the naked eye.

In fact, the new method makes it possible to create nanoparticles — particles whose sizes are measured in billionths of a meter — using just a pen and a strip of plastic, the researchers say. More complex versions of the technique could lead to mass-produced high-tech optical and potentially electronic devices.

The new findings are described this week in the journal Nature, in a paper led by Ayman Abouraddy, a former MIT postdoc and now an associate professor of optics and photonics at the University of Central Florida (UCF); MIT professor of materials science and director of the Research Laboratory of Electronics Yoel Fink; and nine others in Florida and Singapore.

The underlying technology, a process called cold-drawing, has been used for almost a century in the production of synthetic fibers such as nylon and rayon. It was based on a serendipitous discovery by scientists at DuPont, who found that pulling on a naturally brittle thread can actually make it more flexible and robust — thereby ushering in the era of fabrics made of synthetic fibers. In Abouraddy’s research, this old technique has now been expanded to include fibers made up of multiple materials, including ones that ordinarily would be expected to shatter when subjected to stretching or flexing.

Abouraddy and his collaborators have found that under the right conditions, some materials embedded within synthetic polymer fibers will naturally break apart into pieces of uniform length, as the fiber itself is cold-drawn. The cause of this surprising phenomenon is a kind of wave that sweeps along the polymer fiber during the drawing process. This wave is known as a “neck,” since it propagates in the form of a depression with moving “shoulders” — visible to the naked eye — that continuously extend in opposite directions until they span the whole fiber length.

As the shoulders propagate down the fiber, they pinch off any brittle threads embedded in the fiber, which break apart into short, uniformly sized segments. The result can be a bundle of short rods kept in place within the polymer fiber, or the polymer can be dissolved away to leave a collection of separated rods of precisely matched size and shape, which can be of a nanoscale size that would be difficult to manufacture by other methods.

The same basic method, the team found, can also be applied to drawing out thin tissue-like films of material. When a flexible material containing embedded sheets of brittle material is drawn, the brittle material fragments into a set of uniform ribbon-like strips. This configuration could be an inexpensive way of making diffraction gratings, which are transparent substrates with a series of parallel grooves or strips, usually etched into a material via lithography, and are often the basis for optical systems such as spectrographs used to determine the chemical composition of materials.

Such a configuration of parallel strips might even be made, Abouraddy says, into a kind of “nanoscale venetian blinds,” in which an array of strips could be created by stretching the material; then the array could then be closed up again by heating it.

Abouraddy says the basic phenomenon was totally unexpected when he, Fink, and other members of the team began exploring it a few years ago. When a normally brittle material such as glass was embedded in a polymer blank and then drawn, he says, “most people thought it would break randomly in a few locations, and eventually the whole thing would snap.”

But what happened instead was that the glass split into tiny rods of almost perfectly uniform length. “When we first saw it, it was just a complete shock,” Abouraddy says. The surprising result was “the equivalent of taking a plate, throwing it onto the floor, and having it break into a thousand perfectly equal pieces,” he says. It began when the team saw a wave moving along the fiber as it was being pulled — something that had been noticed, but wasn’t fully understood, when the DuPont scientists first developed synthetic fibers. “We saw that wave moving, but as it moved it was snipping the material embedded in it, like a pair of moving scissors snipping pieces as it went.”

Abouraddy adds: “When we saw that wave moving, that was already a big surprise. And then we discovered that it had been discovered almost 90 years earlier” — but at the time, only in a fiber made of a single material, and thus with no “snipping” effect.

As the team investigated the unexpected finding, they kept trying different kinds of materials, both for the outer encapsulating flexible material and for the inner brittle part. They have now demonstrated the uniform fragmenting in materials as varied as gold, glass, silk, polystyrene, biodegradable polymers, electronic materials such as silicon and germanium, natural materials such as silk and human hair, and even ice. They also found that the snipping process “works even if that core is some complex structure.” And the complex structure is perfectly preserved in the segmented pieces, he says.

“Now, you can make a fiber of absolutely arbitrary cross-section, and the cold-drawing takes care of the rest,” he says, creating a set of uniform, complex particles. “It works with any brittle structure, and it works at any size, from microscale to nanoscale, including hollow structures.” The effect, he says, “is truly universal, at the level of those cylindrical fibers or flat sheets.”

Although the greatest potential for this process may lie in high-tech optical or electronic devices, the process is so universal that simple versions can be created by almost anyone, he says.

“This intriguing instability first observed in multimaterial fibers is surprising both in its order and universality as it is applied to various core materials” says Fink, it has been enabled by the fruitful National Science Foundation (NSF)-funded collaboration between UCF and MIT.

Just drawing a line with a felt pen on a strip of flexible plastic, and then stretching out that strip, he says, can fragment the line of ink into quite uniform little segments that act as an optical grating, Abouraddy says — an experiment that even a high-school student could carry out. “It’s a low cost gateway — you can make nanomaterials with just a pen and your bare hands.”

This discovery comes at an auspicious time for the collaboration team. Recently, MIT’s Yoel Fink led a broad consortium of universities and industrial partners to winning the $317 million funding for the Manufacturing Innovation Institute for Revolutionary Fibers and Textiles. Named AFFOA (Advanced Functional Fabrics of America), this institute aims at no less than developing functional fabrics. This new research connects the multimaterial fibers that will be a centerpiece of functional fabrics with the dawn of synthetic textiles ushered in by the pioneering work done at DuPont on cold-drawing a century ago.

This work “takes a well-established process and industrially accepted process and breathes new life into its commercial utility,” says John Ballato, a professor of materials science and engineering at Clemson University who was not connected with this research. “If indeed the universality of the cold working process can be applied to such a diverse range of plastics, ceramics, glasses, metals, and semiconductors, then entirely new products may result which can benefit from the scalable and cost-effectiveness of fiber manufacturing.

Ballato adds that “In the short term, the process can be an important vehicle to scale up the production of larger quantities of nanoparticles, nanorods, and nanowires of a very wide variety of compositions. Longer term, the ability to create tailorable structures within cheap commodity plastics that enable camouflage and biosensing functionalities could be very significant.” Fink and his team, he says, “continue to lead the way in advancing both the science and practical use of multimaterial fibers.”

The team included researchers at the University of Central Florida’s College of Optics and Photonics, the Nanyang Technological University in Singapore, and the University of South Florida. It was supported by the U.S. Air Force Office of Scientific Research and the U.S. National Science Foundation.

Fibers made by transforming materials