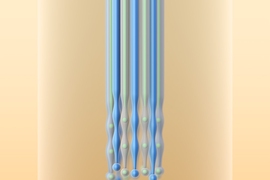 ↓ Download Image
Caption: This illustration shows how a molten fiber, because of a phenomenon known as Rayleigh instability, naturally breaks up into spherical droplets. Researchers from MIT and UCF have figured out how to use this natural tendency as a way to make large quantities of perfectly uniform particles, which can have quite complex structures.
Credits: Image: Yan Liang/Fink Lab

Caption:
This illustration shows how a molten fiber, because of a phenomenon known as Rayleigh instability, naturally breaks up into spherical droplets. Researchers from MIT and UCF have figured out how to use this natural tendency as a way to make large quantities of perfectly uniform particles, which can have quite complex structures.
Credits:
Image: Yan Liang/Fink Lab

Researchers at MIT and the University of Central Florida (UCF) have developed a versatile new fabrication technique for making large quantities of uniform spheres from a wide variety of materials — a technique that enables unprecedented control over the design of individual, microscopic particles. The particles, including complex, patterned spheres, could find uses in everything from biomedical research and drug delivery to electronics and materials processing.

The method is an outgrowth of a technique for making long, thin fibers out of multiple materials, developed over the last several years at MIT by members of the same team. The new work, reported this week in the journal Nature, begins by making thin fibers using this earlier method, but then adds an extra step of heating the fibers to create a line of tiny spheres — like a string of pearls — within these fibers.

Conventional fabrication of microscopic spherical particles uses a “bottom-up” approach, growing the spheres from even tinier “seeds” — an approach that is only capable of producing very tiny particles. This new “top-down” method, however, can produce spheres as small as 20 nanometers (about the size of the smallest known viruses) or as large as two millimeters (about the size of a pinhead), meaning the biggest particles are 100,000 times larger than the smallest ones. But for a given batch, the size of the spheres produced can be extremely uniform — much more so than is possible with the bottom-up approach.

Yoel Fink, a professor of materials science and director of MIT’s Research Laboratory of Electronics, whose group developed the earlier method of producing multimaterial fibers, explains that the new method can also produce multimaterial spheres consisting of different layers or segments. Even more complex structures are possible, he says, offering unprecedented control over particle architecture and composition.

The most likely short-term uses of the new process would be for biomedical applications, says Ayman Abouraddy, a former postdoc in Fink’s lab who is now an assistant professor at UCF’s College of Optics and Photonics. “Typical applications of nanoparticles today are for controlled drug delivery,” he says. But with this new process, two or more different drugs — even ones that are ordinarily incompatible — could be combined inside individual particles, and released only once they’ve reached their intended destination in the body.

The basic process involves creating a large polymer cylinder, called a “preform,” containing an internal semiconductor cylinder core that is an exact scaled-up model of the final fiber structure; this preform is then heated until it is soft enough to be pulled into a thin fiber, like taffy. The internal structure of the fiber, made of materials that all soften at the same temperature, retains the internal configuration of the original cylinder.

The fiber is then heated further so that the semiconducting core forms a liquid, producing a series of discrete spherical droplets within the otherwise continuous fiber. This same phenomenon causes a diminishing stream of water from a faucet to eventually break up into a stream of droplets, famously captured by MIT’s Harold “Doc” Edgerton in his stroboscopic images.

Abouraddy says that during a visit to ancient temples in his native Egypt, he found an inscription showing that even long ago, people were aware of this degradation of a stream of water into droplets — caused by a process now known as Rayleigh instability.

In the new fabrication process developed by Abouraddy and Fink’s team, these droplets “freeze” in place as the fiber solidifies; the preform’s polymer sheath then keeps them locked in place until it is later dissolved away. This overcomes another problem with traditional production of nanoparticles: their tendency to clump together.

In principle, Abouraddy says, the discovery of this process for forming particles could have come many years ago. But even after theorists had predicted that such instabilities could form in the process of drawing fibers, the new discovery came by accident: Joshua Kaufman, a student of Abouraddy’s, was trying to produce fibers, but his experiment “failed” when the fiber kept breaking up into droplets.

Abouraddy, who knew about the theoretical possibility, immediately recognized that this “failure” was actually an important discovery — one that had eluded previous attempts simply because the process requires a precise combination of timing, temperature and materials. Kaufman is the lead author of the Nature paper.

“The ability to harness and control the fleeting fluid instability within a fiber has profound implications for future devices,” Fink says, and could lead to a wide variety of uses. While the group has demonstrated the production of six-segment “beach ball” particles, in principle much more complex structures, made of a variety of materials, should also be possible, he says. Any material that could be drawn into a fiber could now, in principle, be made into a small particle.

John Ballato, director of the Center for Optical Materials Science and Engineering Technologies at Clemson University, who was not involved in the new work, says that this fiber-draw production method is “a major step forward for the scale-up of designed nanoparticles with controlled chemistry and shape.” In addition to its potentially useful applications, Ballato says, this method “also yields new scientific insights” into Rayleigh instability, “a phenomenon that has been well studied, as anyone with a leaky faucet knows all too well.”

Malvin Teich, a professor emeritus of electrical and computer engineering at Boston University and Columbia University, says the approach used by these researchers “is novel and inventive, and it promises significant applications ranging from the fabrication of unique metamaterials to the delivery of drugs.” He adds, “The work is particularly significant because the approach is scalable, and because of the superior uniformity of the sizes and shapes of the particles produced, compared to what can be achieved using other techniques.”

The work was supported by the National Science Foundation, the Air Force Office of Scientific Research and the Army Research Office through MIT’s Institute for Soldier Nanotechnologies.