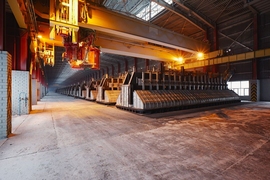 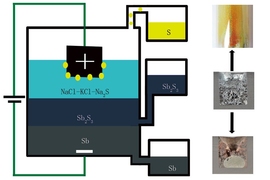 Caption:
A chart shows electrolysis of a molten semiconductor.
Credits:
Courtesy of the researchers

The MIT researchers were trying to develop a new battery, but it didn’t work out that way. Instead, thanks to an unexpected finding in their lab tests, what they discovered was a whole new way of producing the metal antimony — and potentially a new way of smelting other metals, as well.

The discovery could lead to metal-production systems that are much less expensive and that virtually eliminate the greenhouse gas emissions associated with most traditional metal smelting. Although antimony itself is not a widely used metal, the same principles may also be applied to producing much more abundant and economically important metals such as copper and nickel, the researchers say.

The surprising finding is reported this week in the journal Nature Communications, in a paper by Donald Sadoway, the John F. Elliott Professor of Materials Chemistry; postdoc Huayi Yin; and visiting scholar Brice Chung.

“We were trying to develop a different electrochemistry for a battery,” Sadoway explains, as an extension of the variety of chemical formulations for the all-liquid, high temperature storage batteries that his lab has been developing for several years. The different parts of these batteries are composed of molten metals or salts that have different densities and thus inherently form separate layers, much as oil floats on top of water. “We wanted to investigate the utility of putting a second electrolyte between the positive and negative electrodes” of the liquid battery, Sadoway says.

But the experiment didn’t go quite as planned. “We found that when we went to charge this putative battery, we were in fact producing liquid antimony instead of charging the battery,” Sadoway says.

Then, the quest was on to figure out what had just happened.

The material they were using, antimony sulfide, is a molten semiconductor, which normally would not allow for the kind of electrolytic process that is used to produce aluminum and some other metals through the application of an electric current.

“Antimony sulfide is a very good conductor of electrons,” Sadoway says. “But if you want to do electrolysis, you only want an ionic conductor” — that is, a material that is good at conducting molecules that have a net electric charge. But by adding another layer on top of the molten semiconductor, one that is a very good ionic conductor, it turned out the electrolysis process worked very well in this “battery,” separating the metal out of the sulfide compound to form a pool of 99.9 percent pure antimony at the bottom of their cell, while pure sulfur gas accumulated at the top, where it could be collected for use as a chemical feedstock.

In typical smelting processes, the sulfur would immediately bond with oxygen in the air to form sulfur dioxide, a significant air pollutant and the major cause of acid rain. But instead this contained process provides highly purified metal without the need to worry about scrubbing out the polluting gas.

Electrolysis is much more efficient than traditional heat-based smelting methods, because it is a single-step continuous process, Sadoway explains. The discovery of that process is what transformed aluminum, more than a century ago, from a precious metal more valuable than silver into a widely used inexpensive commodity. If the process could be applied to other common industrial metals such as copper, it would have the potential to significantly lower prices as well as reduce the air pollution and greenhouse gas emissions associated with traditional production.

“The thing that made this such an exciting finding,” Sadoway says, “is that we could imagine doing the same for copper and nickel, metals that are used in large quantities.” It made sense to start with antimony because it has a much lower melting point — just 631 degrees Celsius — compared to copper’s 1,085 C. Though the higher melting temperatures of other metals add complication to designing an overall production system, the underlying physical principles are the same, and so such systems should eventually be feasible, he says.

“Antimony was a good test vehicle for the idea, but we could imagine doing something similar for much more common metals,” Sadoway says. And while this demonstration used an ore that is a sulfide (metal combined with sulfur), “we see no reason why this approach couldn’t be generalized to oxide feedstocks,” which represent the other major category of metal ores. Such a process would produce pure oxygen as the secondary product, instead of sulfur.

Ultimately, if steel could be produced by such a process, it could have a major impact, because “steel-making is the number one industrial source of anthropogenic carbon dioxide,” the main greenhouse gas, Sadoway says. But that will be a more difficult process to develop because of iron’s high melting point of about 1,540 C.

“This paper demonstrates a novel approach to produce transition metals by direct electrolysis of their sulfides,” says John Hryn, an Institute Senior Fellow at Northwestern University and a senior advisor at Argonne National Laboratory, who was not involved in this work. He praised the MIT team’s use of a second electrolyte in the cell to counter the effects of electron conduction, “which has previously stymied efficient high-volume production of transition metals by electrolysis. This seminal paper should usher in a new environmentally sound methodology for extraction of metals from sulfide ores.”

Hryn adds that although this demonstration used one specific metal, “The primary value of using antimony is that it can be a demonstration metal for other transition-metal recovery by electrolysis.” In addition, he says, “The potential goes beyond the production of transition metals by electrolysis. The value is the approach used to control electronic conduction in an electrolytic cell, which has value beyond metal production.”

The research was funded by the U.S. Department of Energy, Advanced Research Projects-Energy (ARPA-E), and French energy company Total S.A. through the MIT Energy Initiative.