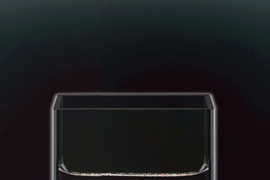 ↓ Download Image
Caption: A physical model of the liquid metal battery at room temperature, in a glass container. The bottom layer is the positive electrode. In the real battery this is an alloy of antimony and lead, represented here by mercury. The middle layer is the electrolyte — in reality, a mixed molten salt; here, a solution of salt in water. The top layer is the current collector of the negative electrode, a metal mesh of iron-nickel alloy.
Credits: Image: Felice Frankel 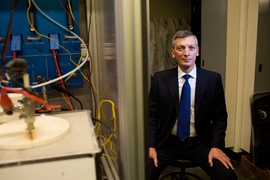 Caption:
A physical model of the liquid metal battery at room temperature, in a glass container. The bottom layer is the positive electrode. In the real battery this is an alloy of antimony and lead, represented here by mercury. The middle layer is the electrolyte — in reality, a mixed molten salt; here, a solution of salt in water. The top layer is the current collector of the negative electrode, a metal mesh of iron-nickel alloy.
Credits:
Image: Felice Frankel

Researchers at MIT have improved a proposed liquid battery system that could enable renewable energy sources to compete with conventional power plants.

Donald Sadoway and colleagues have already started a company to produce electrical-grid-scale liquid batteries, whose layers of molten material automatically separate due to their differing densities. But the new formula — published in the journal Nature by Sadoway, former postdocs Kangli Wang and Kai Jiang, and seven others — substitutes different metals for the molten layers used in a battery previously developed by the team.

Sadoway, the John F. Elliott Professor of Materials Chemistry, says the new formula allows the battery to work at a temperature more than 200 degrees Celsius lower than the previous formulation. In addition to the lower operating temperature, which should simplify the battery’s design and extend its working life, the new formulation will be less expensive to make, he says.

The battery uses two layers of molten metal, separated by a layer of molten salt that acts as the battery’s electrolyte (the layer that charged particles pass through as the battery is charged or discharged). Because each of the three materials has a different density, they naturally separate into layers, like oil floating on water.

The original system, using magnesium for one of the battery’s electrodes and antimony for the other, required an operating temperature of 700 C. But with the new formulation, with one electrode made of lithium and the other a mixture of lead and antimony, the battery can operate at temperatures of 450 to 500 C.

Extensive testing has shown that even after 10 years of daily charging and discharging, the system should retain about 85 percent of its initial capacity — a key factor in making such a technology an attractive investment for electric utilities.

Currently, the only widely used system for utility-scale storage of electricity is pumped hydro, in which water is pumped uphill to a storage reservoir when excess power is available, and then flows back down through a turbine to generate power when it is needed. Such systems can be used to match the intermittent production of power from irregular sources, such as wind and solar power, with variations in demand. Because of inevitable losses from the friction in pumps and turbines, such systems return about 70 percent of the power that is put into them (which is called the “round-trip efficiency”).

Sadoway says his team’s new liquid-battery system can already deliver the same 70 percent efficiency, and with further refinements may be able to do better. And unlike pumped hydro systems — which are only feasible in locations with sufficient water and an available hillside — the liquid batteries could be built virtually anywhere, and at virtually any size. “The fact that we don’t need a mountain, and we don’t need lots of water, could give us a decisive advantage,” Sadoway says.

The biggest surprise for the researchers was that the antimony-lead electrode performed so well. They found that while antimony could produce a high operating voltage, and lead gave a low melting point, a mixture of the two combined both advantages, with a voltage as high as antimony alone, and a melting point between that of the two constituents — contrary to expectations that lowering the melting point would come at the expense of also reducing the voltage.

“We hoped [the characteristics of the two metals] would be nonlinear,” Sadoway says — that is, that the operating voltage would not end up halfway between that of the two individual metals. “They proved to be [nonlinear], but beyond our imagination. There was no decline in the voltage. That was a stunner for us.”

Not only did that provide significantly improved materials for the group’s battery system, but it opens up whole new avenues of research, Sadoway says. Going forward, the team will continue to search for other combinations of metals that might provide even lower-temperature, lower-cost, and higher-performance systems. “Now we understand that liquid metals bond in ways that we didn’t understand before,” he says.

With this fortuitous finding, Sadoway says, “Nature tapped us on the shoulder and said, ‘You know, there’s a better way!’” And because there has been little commercial interest in exploring the properties and potential uses of liquid metals and alloys of the type that are most attractive as electrodes for liquid metal batteries, he says, “I think there’s still room for major discoveries in this field.”

Robert Metcalfe, professor of innovation at the University of Texas at Austin, who was not involved in this work, says, “The Internet gave us cheap and clean connectivity using many kinds of digital storage.  Similarly, we will solve cheap and clean energy with many kinds of storage. Energy storage will absorb the increasing randomness of energy supply and demand, shaving peaks, increasing availability, improving efficiency, lowering costs.”

The research was supported by the U.S. Department of Energy’s Advanced Research Projects Agency-Energy and by French energy company Total.

According to The Economist, a battery design “being developed by Donald Sadoway of the Massachusetts Institute of Technology would use two sorts of liquid metal, separated by a liquid electrolyte.” Using metals of varying densities, Sadoway’s design would allow the substances to float as separate layers in a container.

Professor Donald Sadoway’s team has designed a battery that makes use of molten metals, which could allow for large-scale power storage, reports Jonathan Webb for the BBC. “Previous battery designs have largely been too expensive to help store energy on the scale of a national power grid,” writes Webb.

Mark Peplow writes for Nature about a new molten-metal battery designed by Professor Donald Sadoway’s team: “A battery made of molten metals could help to make sources of renewable energy more viable by storing the excess electricity generated by these intermittent sources.”

One order of steel; hold the greenhouse gases