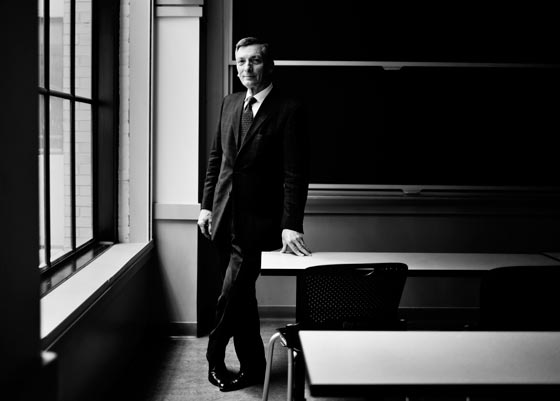 You have to give Donald Sadoway points for style: Not many professors come to the last class of a semester dressed in black tie, decorate the table with linen and a vase of fresh roses, and toast their students with champagne. But then, Sadoway has a tendency to do things differently.

Sadoway, the John F. Elliott Professor of Materials Chemistry at MIT, has earned a crescendo of recognition this year for his pioneering work on an entirely new type of battery, one based on floating layers of high-temperature molten metal and salt. The battery could provide electricity storage on a scale useful to major electric utilities — allowing them to store energy whenever it’s available and cheap, and then pump it back into the grid when it’s most needed. Such storage capability could be the key to making intermittent sources of power — such as sun, wind and tides — a reliable part of the world’s energy supply.

The innovative approach earned Sadoway a coveted spot at this year’s TED talks; a video of his remarks garnered more than 440,000 views in its first three weeks online. And last week, Time magazine included Sadoway in its annual list of “the 100 most influential people in the world.”

Finally, Sadoway’s liquid battery project has garnered more than $13 million in government and industry funding, partly from the French energy company Total, provided through the MIT Energy Initiative (not counting money raised by a company founded to commercialize the technology — half of which came from Bill Gates, who watched Sadoway’s lectures via MIT OpenCourseWare).

Sadoway, the son of second-generation Ukrainian immigrants, was the first member of his family to attend college, let alone teach at one. His parents ran a motel in a small town outside Toronto. His mother was a high school graduate, but his maternal grandmother was illiterate, having had a year or two of schooling at most.

“The gene pool doesn’t turn over in two generations,” he emphasizes. “The only difference between us was opportunity.”

Maybe that rise from modest origins helped spur Sadoway’s tendency to go against the grain. He suggests that one reason his TED talk has become so popular is because of its underlying message “that you could develop a leading-edge technology by ignoring the professionals and putting together your own team of novices,” he says.

The “professionals” in battery technology were indeed skeptical of Sadoway’s liquid-battery concept when he first started working on it around 2005. For one thing, conventional wisdom held that for any manufactured product, the way to achieve economies of scale was to build large numbers of small things.

But Sadoway took the opposite tack, planning to build fewer and bigger things. Furthermore, his technology’s operating temperature — many hundreds of degrees Fahrenheit, required to keep the metal electrodes molten — was seen as an energy-draining showstopper: You’d need so much energy to keep the thing hot, experts reasoned, that this drain would counteract any gains in efficiency you might get.

Not so, Sadoway and his team have demonstrated, through years of theoretical research and a series of ever-larger prototypes. (He describes the sizes of these, respectively, as a shot glass, a hockey puck, a saucer and a pizza.) In fact, it turns out that what has been a handicap for other types of batteries — namely, that they tend to get very hot during either charging or discharging — is actually a big plus for his liquid version. 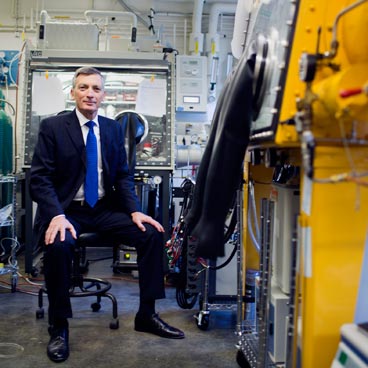 Photo: M. Scott Brauer
Normally, this heating requires a complex, active cooling system to counteract. But for Sadoway, it means that in actual operation, it shouldn’t be necessary to heat the battery much, if at all: It will self-heat while charging and discharging. Even in the desert on a summer day — a situation where conventional batteries can sustain damage or fail — his liquid battery, at about 1,400° F, would be unfazed by the extra heat.

Sadoway’s liquid-battery concept was based on his earlier work in the metal smelting industry. (His three degrees, all from the University of Toronto, are in metallurgy). He realized that the reactor used to smelt aluminum — which relies on huge amounts of electric power driving current through huge vats of molten ore — could be turned on its head to store power, rather than using it up.

Sparked by a suggestion from MIT colleague Gerbrand Ceder, Sadoway set out to see if this concept could be made to work as a battery system. Most people in that situation, he says, would probably have hired top experts in the fields of electrochemistry and smelting to carry out the research. Sadoway took the opposite route, hiring students.

“They were not just any youngsters,” he explains, “they were youngsters at MIT. Nonetheless, they were novices” — and therefore didn’t quite realize how daunting the task might be. And besides, he says, “they believed that if this worked, it could change the world.”

Sadoway’s industrial and academic experience, combined with the students’ energy and enthusiasm, led to significant progress — after a few blind alleys along the way. In the end, with particular help from former graduate student David Bradwell, this research yielded working prototypes.

“They worked miracles,” he says of his team. And the recognition he’s been getting this year, he says, is “about them, it’s not about me. It’s the group.”

This “overnight” success wouldn’t have been possible without a lifetime of study and experience, Sadoway says. After he gave his 14-minute lecture at the TED conference, having carefully rehearsed and memorized it so that he could deliver it without notes, someone asked him how long it took him to prepare the talk.

Prof. Donald Sadoway speaks with Miles O’Brien of the PBS NewsHour about how designing better batteries could help make renewable energy more feasible. “The issue is that we don’t have a battery technology that can meet the rigorous performance requirements of the grid, namely, super low-cost and super long service lifetime,” explains Sadoway.

David Unger of The Christian Science Monitor speaks with Prof. Donald Sadoway about the future of batteries. Sadoway says he views the battery enterprise "as very socially conscious. It would represent a major step in bringing electricity to those who don’t have reliable access to electricity.”