“It’s okay if it breaks and blows up” 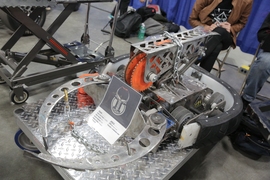 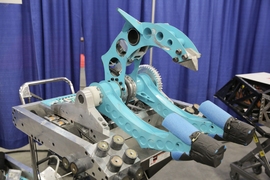 A robot that can throw fire and saws into its opponents with a spinning blade; a 250-pound bot that can damage and throw competitors with a steel drum powered by its 100-horsepower motor; and a robot with two sets of arms to grab and hoist other machines: These are some of the robots developed by MIT-affiliated teams selected to compete in the second season of ABC’s “BattleBots.”

Throughout the 2016 spring semester, four teams of MIT students, research staff, and alumni worked to design, construct, and test combat robots for the “BattleBots” competition, a reboot of the Comedy Central classic that pits homemade combat robots against one another in an elimination-style tournament.

For the MIT participants, competing in “BattleBots” was an opportunity to not only design and build the combat robot of their dreams, but also to apply and test engineering concepts in an exhilarating, hands-on manner. In addition to their academic coursework and extracurricular activities, the competitors dedicated countless hours to building their robots from the ground up, work that provided them with a diverse range of engineering experiences.

“One of the more fun things about ‘BattleBots’ and combat robotics in general is you get to do head-to-head engineering with other people and you get to do it in a pretty low-stress environment. It’s okay if it breaks and blows up because that’s what it’s supposed to do,” says Rebecca Li, a rising senior who led the development of a robot named The Dentist, which features a spinning drum powered by a 100-horsepower motor. “I think that’s what makes it a great hobby sport.”

Landon Carter, a rising senior majoring in mechanical engineering and computer science who worked with Li on The Dentist, said that in addition to the complex mechanical and electrical design challenges the team faced, he learned “a ton of materials science. ‘BattleBots’ at this stage has reached a level of optimization where you really have to care about which materials you are using and in what applications.”

The high level of participation by MIT affiliates in “BattleBots” is an example of MIT’s thriving maker culture, according to Dawn Wendell ’04, SM ’06, PhD ’11, a senior lecturer in the Department of Mechanical Engineering who participated in “BattleBots” as an MIT student during the original Comedy Central show.

Wendell, who served as the faculty advisor for two of the teams, notes that competing in “BattleBots” provides an opportunity for participants to go from concept “all the way through to implementation, [ultimately] having a physical object in front of them that they had the idea for and that they created. This is a really perfect example of MIT’s motto, which is ‘mens et manus,’ or ‘mind and hand.’”

MIT’s ability to field four teams stems in large part from the many makerspaces on campus where students can build, tinker, and experiment on projects outside the scope of their academic activities. “BattleBots” participants used a variety of these makerspaces to construct their robots, including the Department of Mechanical Engineering’s MakerWorks space, the MIT Electronics Research Society (MITERS) space, and the Edgerton Center Area 51 CNC Shop. Participants say they feel fortunate to have such resources on campus to support their efforts.

“It’s important to have these spaces that are flexible for applications beyond their intended usage,” says Charles Guan ’11. Guan led the Equals Zero Robotics team, which designed their robot, Overhaul, with an upper and lower set of arms so that the robot could grasp and hoist opponents. “Having an unofficial base of operations for a lot of student activities is a source where we get a lot of MIT’s innovation.”

In addition to their academic coursework and other activities, many of the student competitors also serve as mentors for the MakerWorks and MITERS spaces. Lucy Du ’16 — a member of LiMITless Robotics, which built a robot dubbed SawBlaze that corrals and cuts other robots with the spinning saw on its arm and throws green fire at its competitors — observes that having a place that is easily accessible to students, such as MakerWorks, can help encourage even more students to build and create in their free time.

“I think that MakerWorks has really lowered the activation energy for people who really want to make stuff but have a little bit of a hard time getting there,” says Du.

The shared spaces where many “BattleBots” participants built their machines also helped foster a spirit of camaraderie between the teams. Despite the fact that they were building separate robots, the four MIT-affiliated teams frequently collaborated and assisted one another with any roadblocks they ran into during their design and building process.

“It was really nice sharing space on the weekends,” says Du. “We would all be staying really late, but we would notice that all the other teams were here late as well.”

Li recalls how during the competition she frequently ran over to another team’s pit for a spare part or assistance, which she says was always readily provided. The collaborative nature of the event “reinforced that this is a community of people. It’s a competition, but it’s also fun at the same time and everyone also wants to see everyone else succeed,” says Li.

MIT’s strong presence at this year’s competition is in keeping with the Institute’s long history of participation in “BattleBots.” MIT fielded teams during the competition’s initial run on Comedy Central from 2000-2002, and students participated in the follow-up, nontelevised events that occurred during the ensuing years. When “BattleBots” returned to television on ABC last year, a team of MIT affiliates, students, and alumni participated in the competition. That team, which included many of the individuals competing in the current season, then splintered into several teams this year so that participants could have an opportunity to build a variety of robots and explore different engineering principles.

Wendell notes that it’s great to see MIT students participating in “BattleBots” who may have been inspired by the first run of the show to pursue a career in engineering. The show’s ability to excite audiences about robotics and engineering is one of her favorite aspects of the competition.

“It’s really fantastic to see that by having “BattleBots” back on TV it has gotten the general public really excited about engineering and robots. And it’s cool to be able to tell my students, who normally see me in a very official role or who see me in the classroom, that I was once in their shoes,” says Wendell. “I was an undergrad and I was building robots and hoping that they would work, but learning a lot in the experiences where they didn’t work as well as I had hoped. And that is a really acceptable and really awesome way to learn.”

Graduate student Jamison Go, who was inspired to become an engineer by watching the show “BattleBots,” is now part of one of four MIT teams competing on the program, writes Jordan Graham for The Boston Herald. “It feels like I’m completing a cycle. To compete on a show which initially inspired me to become an engineer is amazing,” says Go.