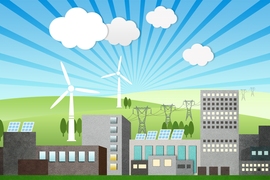 Distributed energy resources — relatively small-scale power technologies such as solar, wind, energy storage, and power electronics and control devices — are being deployed rapidly in the global shift toward a low-carbon energy future. To ensure that both distributed and centralized energy resources are integrated efficiently, however, electric power systems in the U.S., Europe, and other parts of the world need major regulatory, policy, and market overhauls, says an in-depth report, “Utility of the Future,” released today by the MIT Energy Initiative (MITEI). The report was developed in collaboration with the Institute for Research in Technology at Comillas Pontifical University (IIT-Comillas).

“There are great opportunities to deploy distributed energy resources where they will be most cost-effective and impactful, and also to scale up new information and communications technologies that can provide greater flexibility, control, and cost savings for power businesses and consumers alike,” says Robert C. Armstrong, MITEI’s director and the Chevron Professor in Chemical Engineering at MIT. “Our study does not try to predict the future or prescribe which technologies should prevail; instead, it provides a toolkit for businesses, policymakers, and regulators to navigate the unfolding changes in the system and develop a more robust, efficient system for the future.”

Today’s electric power systems were designed, built, and regulated well before distributed energy resources — small- and medium-sized technologies that can provide electricity services and are sited in local distribution networks — had come onto the horizon as viable options for widespread use. Now, the businesses and regulatory bodies that determine how power is distributed need a path forward to incorporate these rapidly proliferating technologies. They also need to evolve to meet changing consumer preferences and increase efficiency across the system to achieve cost savings and carbon emissions reductions.

“The study’s two overarching recommendations are to establish a comprehensive system of prices and regulated charges that applies to all network users, and to remove inefficient barriers that impede the integration and competition of both distributed resources and centralized resources, such as power sector structures that prevent fair competition and wholesale electricity market design flaws,” says one of the study’s principal investigators, Ignacio Pérez-Arriaga, who is a visiting professor at MIT and professor of electrical engineering at IIT-Comillas. “Our framework of recommended proactive reforms can enable the efficient evolution of electric power systems into the next decade and beyond.”

Among the study’s recommendations is a set of measures to improve tariff and rate structures for electricity services. For example, electricity services should be priced in a “technology-agnostic” manner that is based solely on how consumers use these services. Making use of “peak-coincident capacity charges,” which increase prices when electricity networks are under stress or generating capacity is scarce, can discourage consumers from drawing on the grid during these times. Prices and charges should also better reflect how the value of services changes at different times of day or at different locations in the grid. Such cost-reflective pricing can open up opportunities for distributed resources — many of which already exist but are not responding to current economic signals — and enable significant cost savings.

Another finding is that for technologies such as solar photovoltaics and energy storage, which can be connected at different voltage levels and various sizes, understanding tradeoffs between locational value and incremental unit costs due to economies of unit scale can help planners identify the ideal locations and applications for these resources.

Additional recommendations include improvements to the way distribution network companies are compensated and incentivized to incorporate distributed resources efficiently, re-evaluation of the structure of the electricity industry to allow the creation of new business models, and implementation of robust cybersecurity standards for interconnected energy resources and appliances. Improvements to wholesale market design could also better integrate distributed resources and reward greater flexibility while creating a level playing field for all technologies.

The report emphasizes the urgency of proactive reforms. Electricity users now face unprecedented choices regarding how they get their power and manage their electricity consumption; they need improved economic signals — prices, charges, and other economic incentives — in the near term to guide these decisions.

“The risk of continuing business as usual is immense in terms of system reliability and costs associated with inefficiencies — which many stakeholders in the electric power sector recognize and want to avoid,” adds Pérez-Arriaga.

“This report is the result of a multiyear, comprehensive, and rigorous research study in which authors conducted extensive primary research, including data gathering and modeling, and interviews with regulators and business leaders in the electric power sector — including the study consortium members,” says the study’s executive director, Raanan Miller of MITEI. “We hope that regulators, policymakers, and industry stakeholders find it a useful source of information that helps them weigh decisions and take actions to guide the evolution of the electric power sector.”

Research and findings from the “Utility of the Future” study will inform research taking place through MITEI’s new Low-Carbon Energy Center for Electric Power Systems, one of eight MITEI low-carbon energy centers, each of which focuses on advancing key technology areas for addressing climate change.

This report is the first in a new series of MIT consortium research studies focused at the system level and intended to inform industry stakeholders and regulators. The other report currently under way in this new series is the “Mobility of the Future” study on the evolution of the transportation sector. The consortium members of “Utility of the Future” are a diverse set of leading international companies with expertise in various aspects of electric power services and technologies. Members provided support, gave regular feedback, shared insights in a series of workshops, and participated in the external advisory committee.

Like MITEI’s “Future of” studies, “Utility of the Future” is written by a multidisciplinary team of MIT researchers, whose research was informed by a faculty advisory committee.

The MIT Energy Initiative is MIT’s hub for multidisciplinary energy research, education, and outreach. Through these three pillars, MITEI helps develop the technologies and solutions that will deliver clean, affordable, and plentiful sources of energy. Founded in 2006, MITEI’s mission is to advance low- and no-carbon emissions solutions that will efficiently meet growing global energy needs while minimizing environmental impacts, dramatically reducing greenhouse gas emissions, and mitigating climate change. MITEI engages with industry and government through its Low-Carbon Energy Centers, comprehensive reports to inform decision makers, and other multi-stakeholder research initiatives.

MITEI releases report on the future of solar energy