The teacher becomes the student 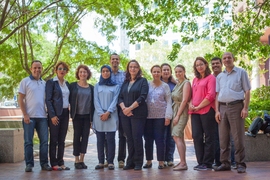 As it does every year, MIT stayed active throughout the summer months, welcoming tourists snapping shots of the Great Dome, campers playing tag on North Court, and students hoping to brush up their computer coding skills, in almost equal measure. For three weeks in July, 10 professors from Tunisia joined the crowds in the Infinite Corridor, as they participated in the inaugural installment of the MIT-Educator program.

Headed by Hazel Sive, a professsor in the Department of Biology, the MIT-Educator program is the latest addition to the MIT-AFRICA Initiative, an umbrella that communicates and promotes MIT partnerships in Africa that focus on education, research, and innovation. Sive is Founding Coordinator of the Initiative. MIT-Educator encourages professors to think about what they do, how they do it, and how they might do it better, on a more intimate level than is possible for when their own classes are in session.

“Higher educators are very often thrown into being educators without much instruction. Faculty are smart and creative, so they’re able to get by, but there’s very little discussion about what it means to be a university educator or how to educate at the level required,” Sive says. “As a MacVicar Faculty Fellow, I’ve been interested for a while in bringing together the various expertise around MIT and setting up a collegial, thoughtful program that addresses those questions.”

That personal investment is what drove MIT-Educator into existence. As is often the case, a few chance meetings and a little bit of serendipity connected Sive and MIT-AFRICA Program Manager Julia Reynolds-Cuellar, with a member of the Tunisian Ministry of Higher Education who was looking for a way to collaborate with MIT. At the same time, Sive was trying to put her idea for a new program about higher education into practice. The parties came to an understanding in which the U.S. Embassy in Tunisia funded the program, now set to focus on the life sciences, while the Ministry of Higher Education worked with MIT on broad goals.

Next, the hunt began for participants in what would be MIT’s first collaboration of any kind with Tunisia. A nationwide call went out to institutions with life science programs, looking for professors to spend three weeks of their summer in Cambridge, Massachusetts. After being preselected, finalists went through a rigorous application process, which included an in-depth written component and a Skype interview with Sive and Reynolds-Cuellar.

“It was actually very nice to prepare the document,” says program participant Amal Hamza-Chaffai, a professor of biology at the University of Sfax in Tunisia. The questions required applicants to consider their own thoughts about teaching, and offered a glimpse into what they could expect from the program. Hamza-Chaffai, who has been teaching since 1993, dove into the assignment, examining some long-held personal beliefs about what it means to be a higher educator. “I spent two weeks just thinking about these questions,” Hamza-Chaffai says. “That alone was very interesting.”

A focus on problem solving

The program began in early July, with a mission to share with the professors some of what makes MIT so special — particularly the active learning and problem-solving pedagogy, emphasis on entrepreneurship, and commitment to creative digital learning approaches. The professors were then expected to implement the lessons they learned into their everyday teaching practices in Tunisia.

The Ministry of Higher Education also tasked the group with making recommendations about how to modify the life sciences curriculum in Tunisia as a whole. With much of the education reform in the country funneling directly through the Ministry, this lofty goal is slightly more manageable than it may be in a country like the United States, but it is still a considerable undertaking.

The program was organized under five modules, which focused on curriculum development, teaching life sciences, current life sciences research, entrepreneurship, and online education. Speakers from across the Institute, including members of the Martin Trust Center for MIT Entrepreneurship, the Teaching and Learning Laboratory, the Office of Digital Learning, and other faculty, discussed with the group how MIT approaches these topics.

“At MIT, we educate with several unique attributes,” Sive says. “We have a culture of problem-solving that is deeply embedded in our students and is really unusual, both in our own country and globally. It’s one of the attributes that makes our students so employable when they leave here.”

The program also highlighted MIT’s commitment to online learning, the emphasis the Institute has placed on entrepreneurship, and the growing emphasis on science of learning. “If you put all of those things together, our approaches to higher education at MIT make a unique and very useful set [of pillars],” Sive says.

The Tunisian professors agreed. The topics MIT-Educator focused on were addressing a real need in their country, where unemployment is high and a diploma doesn’t always lead to a career. “If we teach students in a traditional manner, they have a degree with no special skills,” explains Professor Mohamed Ksibi, director of the Department of Biotechnology at the University of Sfax. “But, if we try to introduce entrepreneurship from the first level, students will learn from the beginning how to implement their work in the field.”

Hamza-Chaffai cites the abundance of natural resources in Tunisia, most of which are not being fully optimized, as a clear area that could benefit from increased interest from students interested in both the life sciences and entrepreneurship.

Both the program leaders from MIT and the participants from Tunisia emphasize the collegial nature of the program as one of its greatest strengths. The ability to share openly and exchange ideas freely in a format that fostered discussion made for an experience that built relationships between faculty at MIT and in Tunisia, Hamza-Chaffai notes.

Although the professors had traveled to MIT to learn something new, one of those lessons turned out to be how much commonality exists. “It’s funny how education is universal. There are so many common points,” says Nabil Miled, an associate professor in the Department of Biotechnology at the University of Sfax. “The problems are the same, the officials are the same, the students are almost the same. It’s been a good experience for us, as teachers, to learn. We feel a responsibility to try and benefit our students from this training.”

With their return to Tunisia, the professors are now working on revising their curriculum at home in conjunction with their new colleagues at MIT. While at MIT, the group discussed addressing the Ministry as a group, although no plans had yet been finalized.

While it will take time to see the full impact of the program, to all involved, round one of MIT-Educator has proven itself to be a success. The program will expand and run next year and beyond, with groups in different countries and potentially different fields besides the life sciences. There will also be continued collaboration with the professors in Tunisia. Sive hopes that junior MIT faculty will join the program as they consider what it means to be a higher educator and develop their curricula.

“MIT now has a new set of connections to a country we don’t know enough about, in which we don’t have deep alumni ties,” MIT’s Associate Provost Philip Khoury explains. It’s important, he notes, for MIT students to learn about, partake in, learn from, and hopefully help, other societies, and forging ties through programs like MIT-Educator expands their opportunities to do so. “Who knows what may turn up for us in Tunisia?” he says.

For her part, Sive seems to have successfully practiced what she preaches. The entrepreneurial spirit that got MIT-Educator off the ground has been passed onto at least the first 10 participants and seems poised to spread much further. “As you move forward on a new pathway, possibilities are revealed that you didn’t even know existed,” Sive says. “MIT-Educator will evolve, embracing the possibilities of how to address higher education in novel, thoughtful, and useful ways.”

“A new leadership cadre for science and engineering”