Caption:
MIT senior Brian Wanek wears a racing helmet inside a prototype of what will be the driver’s seat in the 2017 MIT Formula SAE car as sophomore Wasay Anwer measures the frame.

Caption:
Prototyping the battery pack, many of the parts were cut on the Area 51's water jet cutter.
Credits:
Photo: Camilla Brinkman

Caption:
At the 2016 Collegiate Design Series at the Lincoln Airpark in Lincoln, Nebraska, a rigorous inspection of the team's vehicle takes place.
Credits:
Photo courtesy of MIT Formula SAE.

Imagine if you and a group of students were tasked with designing, building, testing, and driving a Formula-style electric race car from the ground up. Every year.

For students who are members of MIT Motorsports — a.k.a. the MIT Formula SAE (FSAE) team, originally founded in 2001 — that task determines how they spend their free time, on weekends, evenings, and often, January Independent Activities Period as well as summer.

On a recent Saturday in the Edgerton Center’s Area 51 Student Shop (Room N51), about two dozen students on the FSAE team were sitting at large work tables, huddled over their laptops, designing components for their 2017 vehicle using the Solidworks design software. Friendly banter, shared jokes, and periods of serious focus characterized the day. One student, senior Brian Wanek, sat wearing a helmet inside a prototype of what would be the driver’s seat, while sophomore Wasay Anwer measured the frame. 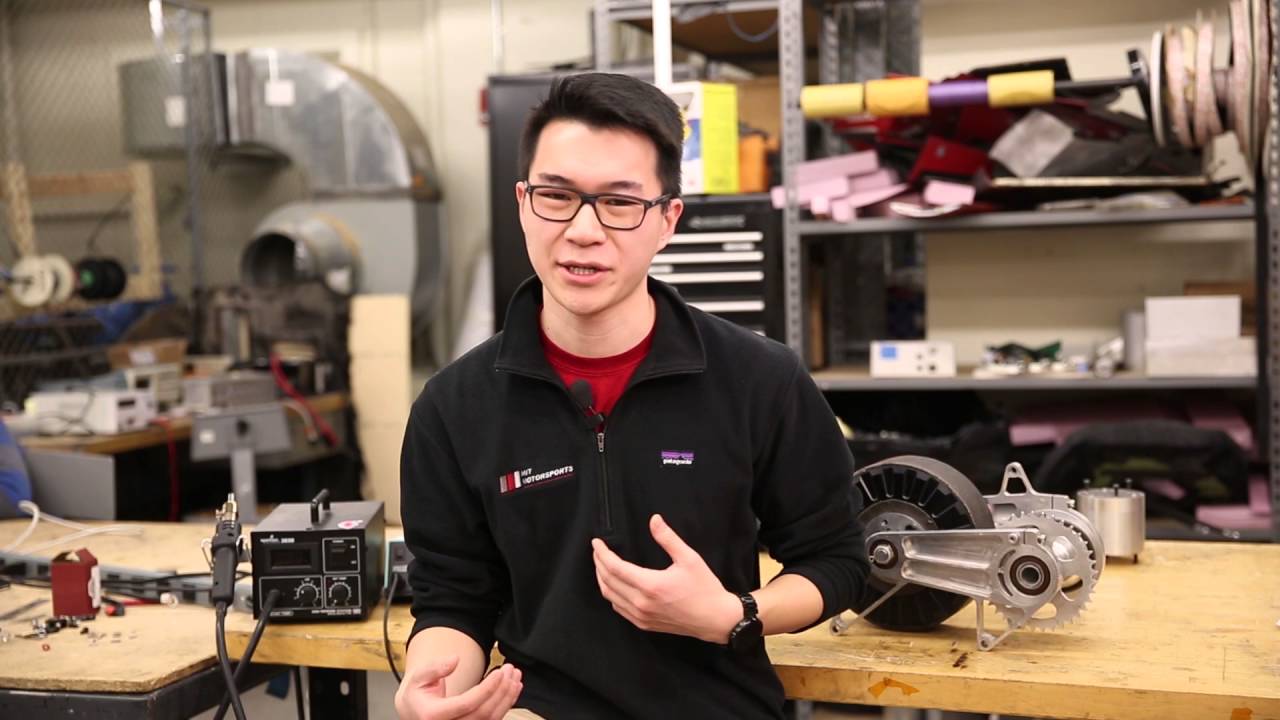 The task for this year — borrowing from a Daft Punk song — is building a harder, better, faster, stronger car for the June 2017 Collegiate Design Series hosted by the Society of Automotive Engineers in Lincoln, Nebraska.

Last year’s performance was nothing to shrug at. MIT's team passed all inspections, placed fourth in vehicle cost (spending the least amount of money to construct the car), placed fourth overall in design, and sixth overall in a field of 21 teams from around the globe.

“Our previous car was an evolutionary step in our team’s history,” says team captain and MIT junior Luis Alberto Mora, who joined FSAE as a freshman. “We kept the working components the same and made minor improvements on previous designs. This year’s car is a revolutionary step; brand new electric powertrain and batteries, new tire size, giving us the freedom to make no compromises in performance.”

The team operates on a tight budget, just over $100,000, and they actively raise funds from sponsors inside and outside of MIT. The Edgerton Center, the Department of Mechanical Engineering, Ford Motor Company, and General Motors provide the bulk of funding necessary to keep the team running year after year.

More than 1,000 parts go into the construction of their car, most of which is fabricated in the shop using a mix of manual and computer numeric control (CNC) machines, rapid prototyping machines, and water jet cutters. The team typically purchases all the raw materials needed to build their new car, as well as high-cost items such as battery cells, electric motors, and motor controllers.

This year the team is designing their own battery pack based off of high-discharge lithium-ion cy­lindrical cells. “Our previous battery pack [used on last year’s car] was purchased by a company that later went out of business and needed lots of repairs. We gained a lot of knowledge from having to fix it,” says Elliot Owen, a junior in mechanical engineering and battery lead for MIT FSAE. “This year’s battery pack will have a different chemistry in a different format. Previously we had big floppy sheets, now we have little canisters, similar to what is used in Tesla. We can make a 25 percent weight reduction, we have more energy, and it’s safer,” Owen says.

The lighter car weighs in at 215 kilograms without a driver, 30 kg lighter than last year’s vehicle. The new car will have a chassis and suspension of a hybrid design: a primary steel tube structure with stressed carbon fiber panels.

Last year’s car also serves a purpose for this year’s build. “We can try out new software on the old car, we can debug it, and by the time the new car is built, the software, the mechanical parts, are already worked out,” Mora says.

To sustain a team that, without fail, loses a number of valuable team members each year to graduation is no small task — and recruiting new members is essential. Tianye Chen, a junior in electrical engineering and computer science who is the low voltage electrical systems lead, says: “We try to give new members meaningful things to do, teach them how to use the tools, and give them projects to keep them engaged.”

Patrick McAtamney, technical instructor and master machinist in Area 51, works closely with the FSAE team and sees multiple benefits being on an Edgerton Center team. “One thing that students get are social skills, how to work with other team members on sub teams, a mechanical engineering student will work with an aero-astro student to solve engineering problems together.”

“FSAE provides one of the most real-world engineering experiences offered on campus,” says assistant professor of mechanical engineering Amos Winter, the team’s faculty advisor who meets with them regularly to go over design specifications. “As an educator, it makes me very happy to see the students absorb, synthesize, and apply the theory we teach in classes into practical engineering solutions.”

While the June competition is still a ways off, for the FSAE students it will mark the culmination of a year-long project of long hours, hard work, and fun — a noteworthy accomplishment for all.

“It’s okay if it breaks and blows up”

Sleeping under the stars in Australia

Fast, furious, and soon to be electric