Genomes, good news, and you 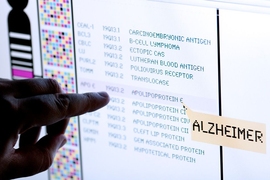 ↓ Download Image
Caption: “If people get good news, they significantly decrease their risk perception,” says Joshua Krieger, a doctoral candidate at the MIT Sloan School of Management, and lead author of a new study on how people respond to personal genomic data. “You see a much bigger change for good news than bad news.”

Caption:
“If people get good news, they significantly decrease their risk perception,” says Joshua Krieger, a doctoral candidate at the MIT Sloan School of Management, and lead author of a new study on how people respond to personal genomic data. “You see a much bigger change for good news than bad news.”

Personal genomics lets people evaluate their risk levels for many diseases. But how do they respond to that data? A unique new study co-authored by investigators from MIT and Brigham and Women’s Hospital has some answers: People react more strongly to good medical news than to bad medical news, and they respond more to one surprising result than to a broad array of findings.

The study, one of the first of its kind, uses before-and-after evaluations of risk by consumers regarding eight serious diseases, including cancer, heart disease, Alzheimer’s disease, and Parkinson’s disease. The research examines subjective reactions and looks at the extent to which people change their self-assessments of their risk of developing an illness, based on new genetic information.

“If people get good news, they significantly decrease their risk perception,” says Joshua Krieger, a doctoral candidate at the MIT Sloan School of Management, and lead author of a new paper detailing the study. “You see a much bigger change for good news than bad news.”

In fact, people adjust their risk perceptions about twice as much for positive news as for negative news.

“There is an optimism bias, in that people want to believe good news,” says Krieger, drawing on related research in cognitive psychology.

“This research expands our understanding of how the consumers of personal genomics may react to what they perceive as elevated or diminished risk, and reminds us that perceptions are not always logical,” says Robert C. Green, a medical geneticist at Brigham and Women’s Hospital and Harvard Medical School.

The study is part of the long-term Impact of Personal Genomes (PGen) project, which examines many aspects of the field. Its principal investigators are Green, and J. Scott Roberts, an associate professor at the University of Michigan School of Public Health.

The paper, “The impact of personal genomics on risk perceptions and medical decision-making,” is published today in Nature Biotechnology.

The authors are Krieger; Fiona Murray, who is associate dean for innovation, co-director of the MIT Innovation Initiative, and the William Porter (1967) Professor of Entrepreneurship at MIT Sloan; Roberts; and Green, a physician and genetics researcher who is also a faculty member at the Broad Institute.

The study looked at the responses of 617 consumers who received genomic data from the personal genomics company 23andMe. The respondents reported their risk perception for eight medical conditions before receiving the results, and then again six months after receiving the results. The research is the first one to evaluate consumers’ responses in a real-world setting, based on data from a commercial firm.

In the time since the study was conducted, the U.S. Food and Drug Administration (FDA) in 2013 required 23andMe to stop offering direct-to-consumer genetics tests for disease risks. (Such firms also provide consumers with ancestry information.) However, in 2015 the FDA agreed to let 23andMe offer a smaller set of medical results to consumers.

The study also examined the extent to which changes in risk perception, based on the new genomic data, might spur people into making follow-up visits to medical providers, and under what circumstances.

“People aren’t responding to the trends across all their disease [data], but they are willing to take follow-up actions when they get one or two results that are really surprising,” Krieger adds.

Krieger also cites the work of Tali Sharot, a cognitive neuroscientist at University College London and a recent visiting scientist at MIT, whose research on “optimism bias” helped provide groundwork for the researchers’ interpretation of the results.

Following up, but not flocking

That suggests people might not necessarily swamp doctors with requests for examinations after receiving genetic information on disease risks, one of the concerns surrounding the direct-to-consumer genetic testing business.

“It doesn’t seem like people are flocking to the doctor with [insignificant] results and trying to take action with every little change in risk perception,” Krieger says.

Bad news about genetic risks also led to a larger change in risk perception for Alzheimer’s disease than for the other diseases in the study. Such variations in patient reactions, Krieger suggests, could make policy development especially complex in personal genomics.

There may not be “a one-size-fits-all approach to regulating [information about] genetic diseases,” Krieger observes. “Diseases vary in their severity, their mortality, their ability for us to treat those diseases, and it seems like those characteristics matter for patients as well.”

The study was supported by the National Institutes of Health.