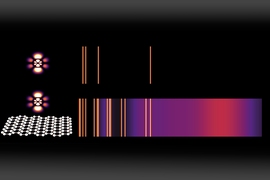 ↓ Download Image
Caption: Emission spectra are a widely used method for identifying chemical compounds; the bright lines reveal the different frequencies of light that can be emitted by an atom. Here, a normal emission spectrum for an atom in a high-energy state (top) is compared to the emission from the same atom placed just a few nanometers (billionths of a meter) away from graphene that has been doped with charge carriers (bottom). For each energy-level transition, an orange line (or purple cloud) appears if that transition is estimated to be faster than one per microsecond — making it frequent enough to be observed. 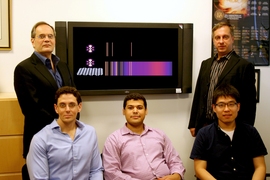 Caption:
Emission spectra are a widely used method for identifying chemical compounds; the bright lines reveal the different frequencies of light that can be emitted by an atom. Here, a normal emission spectrum for an atom in a high-energy state (top) is compared to the emission from the same atom placed just a few nanometers (billionths of a meter) away from graphene that has been doped with charge carriers (bottom). For each energy-level transition, an orange line (or purple cloud) appears if that transition is estimated to be faster than one per microsecond — making it frequent enough to be observed.
Credits:
Courtesy of the researchers

A new MIT study could open up new areas of technology based on types of light emission that had been thought to be “forbidden,” or at least so unlikely as to be practically unattainable. The new approach, the researchers say, could cause certain kinds of interactions between light and matter, which would normally take billions of years to happen, to take place instead within billionths of a second, under certain special conditions.

The findings, based on a theoretical analysis, are reported today in the journal Science in a paper by MIT doctoral student Nicholas Rivera, Department of Physics Professor Marin Soljačić, Francis Wright Davis Professor of Physics John Joannopoulos, and postdocs Ido Kaminer and Bo Zhen.

Interactions between light and matter, described by the laws of quantum electrodynamics, are the basis of a wide range of technologies, including lasers, LEDs, and atomic clocks. But from a theoretical standpoint, “Most light-matter interaction processes are ‘forbidden’ by electronic selection rules, which limits the number of transitions between energy levels we have access to,” Soljačić explains.

For example, spectrograms, which are used to analyze the elemental composition of materials, show a few bright lines against a mostly dark background. The bright lines represent the specific “allowed” energy level transitions in the atoms of that element that can be accompanied by the release of a photon (a particle of light). In the dark regions, which make up most of the spectrum, emission at those energy levels is “forbidden.”

With this new study, Kaminer says, “we demonstrate theoretically that these constraints can be lifted” using confined waves within atomically thin, 2-D materials. “We show that some of the transitions which normally take the age of the universe to happen could be made to happen within nanoseconds. Because of this, many of the dark regions of a spectrogram become bright once an atom is placed near a 2-D material.”

Electrons in an atom have discrete energy levels, and when they hop from one level to another they give off a photon of light, a process called spontaneous emission. But the atom itself is much smaller than the wavelength of the light that gets emitted — about 1/1,000 to 1/10,000 as big — substantially impairing the interactions between the two.

The trick is, in effect, to “shrink” the light so it better matches the scale of the atom, as the researchers show in their study. The key to enabling a whole range of interactions, specifically transitions in atomic states that relate to absorbing or emitting light, is the use of a two-dimensional material called graphene, in which light can interact with matter in the form of plasmons, a type of electromagnetic oscillation in the material.

These plasmons, which resemble photons but have wavelengths hundreds of times shorter, are very narrowly confined in the graphene, in a way that makes some kinds of interactions with that matter many orders of magnitude more likely than they would be in ordinary materials. This enables a variety of phenomena normally considered unattainable, such as the simultaneous emission of multiple plasmons, or two-step light-emitting transitions between energy levels, the team says.

This method can enable the simultaneous emission of two photons that are “entangled,” meaning they share the same quantum state even when separated. Such generation of entangled photons is an important element in quantum devices, such as those that might be used for cryptography.

Beyond its scientific implications, he says, “this study has possible applications across multiple disciplines, since in principle it has potential to enable the full use of the periodic table for optical applications.” This could potentially lead to applications in spectroscopy and sensing devices, ultrathin solar cells, new kinds of materials to absorb solar energy, organic LEDs with higher efficiencies, and photon sources for possible quantum computing devices.

“From the standpoint of fundamental science, this work lays the groundwork for a subfield that just a few years ago was difficult to imagine and until now was largely unexplored,” Soljačić says.

“Two-dimensional materials confine fields to a surface and motion to a plane, making possible many effects that are orders-of-magnitude too weak to appear in a bulk volume,” says Jason Fleischer, an associate professor of electrical engineering at Princeton University, who was not involved in this research. This work, he says, “systematically explores how 2-D materials improve light-matter interactions, laying a theoretical foundation for faster electronic transitions, enhanced sensing, and better emission, including the compact generation of broadband and quantum light.”

The work was partly supported by the Army Research Office through the Institute for Soldier Nanotechnologies at MIT, and by the U.S. Department of Energy.