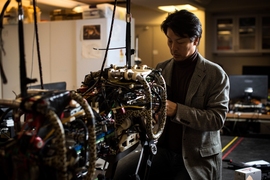 ↓ Download Image
Caption: “Say there are toxic gases leaking in a building, and you need to close a valve inside, but it’s dangerous to send people in,” says Sangbae Kim, associate professor of mechanical engineering at MIT. “Now, there is no single robot that can do this kind of job. I want to create a robotic first responder that can potentially do more than a human and help in our lives.” 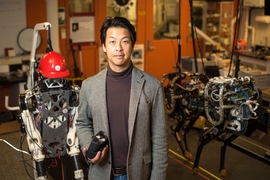 ↓ Download Image
Caption: “Say there are toxic gases leaking in a building, and you need to close a valve inside, but it’s dangerous to send people in,” says Sangbae Kim, associate professor of mechanical engineering at MIT. “Now, there is no single robot that can do this kind of job. I want to create a robotic first responder that can potentially do more than a human and help in our lives.”

Caption:
“Say there are toxic gases leaking in a building, and you need to close a valve inside, but it’s dangerous to send people in,” says Sangbae Kim, associate professor of mechanical engineering at MIT. “Now, there is no single robot that can do this kind of job. I want to create a robotic first responder that can potentially do more than a human and help in our lives.”

In the not so distant future, first responders to a disaster zone may include four-legged, dog-like robots that can bound through a fire or pick their way through a minefield, rising up on their hind legs to turn a hot door handle or punch through a wall.

Such robo-rescuers may be ready to deploy in the next five to 10 years, says Sangbae Kim, associate professor of mechanical engineering at MIT. He and his team in the Biomimetic Robotics Laboratory are working toward that goal, borrowing principles from biomechanics, human decision-making, and mechanical design to build a service robot that Kim says will eventually do “real, physical work,” such as opening doors, breaking through walls, or closing valves.

“Say there are toxic gases leaking in a building, and you need to close a valve inside, but it’s dangerous to send people in,” Kim says. “Now, there is no single robot that can do this kind of job. I want to create a robotic first responder that can potentially do more than a human and help in our lives.”

To do this, Kim, who was awarded tenure this year, is working to fuse the two main projects in his lab: the MIT Cheetah, a four-legged, 70-pound robot that runs and jumps over obstacles autonomously; and HERMES, a two-legged, tele-operated robot, whose movements and balance are controlled remotely by a human operator, much like a marionette or a robotic “Avatar.”

“I imagine a robot that can do some physical, dynamic work,” Kim says. “Everybody is trying to find overlapping areas where you’re excited about what you’re working on, and it’s useful. A lot of people are excited to watch sports because when you watch someone moving explosively, it is hypothesized to trigger the brain’s  ‘mirror neurons’ and you feel that excitement at the same time. For me, when my robots perform dynamically and balance, I get really excited. And that feeling has encouraged my research.”

Kim was born in Seoul, South Korea, where he says his mother remembers him as a tinkerer. “Everything with a screw, I would take apart,” Kim says. “And she said the first time, almost everything broke. After that, everything started working again.”

He attended Yonsei University in the city, where he studied mechanical engineering. In his second year, as has been mandatory in the country, he and other male students joined the South Korean army, where he served as a drill sergeant for two and a half years.

“We taught [new recruits] every single detail about how to be a soldier, like how to wear shirts and pants, buckle your belt, and even how to make a fist when you walk,” Kim recalls. “The day started at 5:30 a.m. and didn’t end until everyone was asleep, around 10:30 p.m., and there were no breaks. Drill sergeants are famous for being mean, and I think there’s a reason for that — they have to keep very tight schedules.”

After fulfilling his military duty, Kim returned to Yonsei University, where he gravitated toward robotics, though there was no formal program in the subject. He ended up participating in a class project that challenged students to build robots to perform specific tasks, such as capturing a flag, and then to compete, bot to bot, in a contest that was similar to MIT’s popular Course 2.007 (Design and Manufacturing), which he now co-teaches.

“[The class] was a really good motivation in my career and made me anchor on the robotic, mechanistic side,” Kim says.

In his last year of college, Kim developed a relatively cheap 3-D scanner, which he and three other students launched commercially through a startup company called Solutionix, which has since expanded on Kim’s design. However, in the early stages of the company’s fundraising efforts, Kim came to a realization.

“As soon as it came out, I lost excitement because I was done figuring things out,” Kim says. “I loved the figuring-out part. And I realized after a year of the startup process, I should be working in the beginning process of development, not so much in maturation of products.”

After enabling first sales of the product, he left the country and headed for Stanford University, where he enrolled in the mechanical engineering graduate program. There, he experienced his first taste of design freedom.

“That was a life-changing experience,” Kim says. “It was a more free, creativity-respecting environment — way more so than Korea, where it’s a very conservative culture. It was quite a culture shock.”

Kim joined the lab of Mark Cutkosky, an engineering professor who was looking for ways to design bioinspired robotic machines. In particular, the team was trying to develop a climbing robot that mimicked the gecko, which uses tiny hairs on its feet to help it climb vertical surfaces. Kim adapted this hairy mechanism in a robot and found that it worked.

“It was 2:30 a.m. in the lab, and I couldn’t sleep. I had tried many things, and my heart was thumping,” Kim recalls. “On some replacement doors with tall windows, [the robot] climbed up smoothly, using the world’s first directional adhesives, that I invented. I was so excited to show it to the others, I sent them all a video that night.”

He and his colleagues launched a startup to develop the gecko robot further, but again, Kim missed the thrill of being in the lab. He left the company soon after, for a postdoc position at Harvard University, where he helped to engineer the Meshworm, a soft, autonomous robot that inched across a surface like an earthworm. But even then, Kim was setting his sights on bigger designs.

“I was moving away from small robots, because it’s very difficult for them do to real, physical work,” Kim says. “And so I decided to develop a larger, four-legged robot for human-level physical tasks — a long-term dream.”

In 2009, Kim accepted an assistant professorship in MIT’s Department of Mechanical Engineering, where he established his Biomimetic Robotics Lab and set a specific research goal: to design and build a four-legged, cheetah-inspired robot.

“We chose the cheetah because it was the fastest of all land animals, so we learned its features the best, but there are many animals with similarities [to cheetahs],” Kim says. “There are some subtle differences, but probably not ones that you can learn the design principles from.”

In fact, Kim quickly learned that in some cases, it may not be the best option to recreate certain animal behaviors in a robot.

“A good example in our case is the galloping gait,” Kim says. “It’s beautiful, and in a galloping horse, you hear a da-da-rump, da-da-rump. We were obsessed to recreate that. But it turns out galloping has very few advantages in the robotics world.”

Animals prefer specific gaits at a given speed due to a complex interaction of muscles, tendons, and bones. However, Kim found that the cheetah robot, powered with electric motors, exhibited very different kinetics from its animal counterpart. For example, with high-power motors, the robot was able to trot at a steady clip of 14 miles per hour — much faster than animals can trot in nature.

“We have to understand what is the governing principle that we need, and ask: Is that a constraint in biological systems, or can we realize it in an engineering domain?” Kim says. “There’s a complex process to find out useful principles overarching the differences between animals and machines. Sometimes obsessing over animal features and characteristics can hinder your progress in robotics.”

In addition to building bots in the lab, Kim teaches several classes at MIT, including 2.007, which he has co-taught for the past five years.

“It’s still my favorite class, where students really get out of this homework-exam mode, and they have this opportunity to throw themselves into the mud and create their own projects,” Kim says. “Students today grew up in the maker movement and with 3-D printing and Legos, and they’ve been waiting for something like 2.007.”

Kim also teaches a class he created in 2013 called Bioinspired Robotics, in which 40 students team up in groups of four to design and build a robot inspired by biomechanics and animal motions. This past year, students showcased their designs in Lobby 7, including a throwing machine, a trajectory-optimizing kicking machine, and a kangaroo machine that hopped on a treadmill.

Outside of the lab and the classroom, Kim is studying another human motion: the tennis swing, which he has sought to perfect for the past 10 years.

“In a lot of human motion, there’s some secret recipe, because muscles have very special properties, and if you don’t know them well, you can perform really poorly and injure yourself,” Kim says. “It’s all based on muscle function, and I’m still figuring out things in that world, and also in the robotics world.”

CBS This Morning’s Dana Jacobson explores how MIT researchers are developing technology to enable robots to assist with disaster response, including a robotic cheetah and a system that 3-D prints robots. Prof. Russ Tedrake says that, “there's a natural transition from the robots in the labs now into the robots doing meaningful work.”