Your child, the literary talent 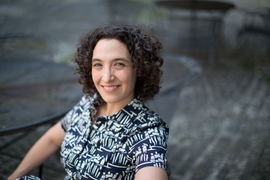 ↓ Download Image
Caption: “It really matters how adults think and talk about what it means to be a child,” says literature professor Marah Gubar, noting that childhood “is not just biological; it’s also a social and cultural matter, so it changes over time, across cultures, and in different [social] classes.” 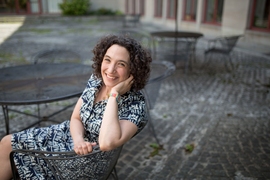 ↓ Download Image
Caption: “It really matters how adults think and talk about what it means to be a child,” says literature professor Marah Gubar, noting that childhood “is not just biological; it’s also a social and cultural matter, so it changes over time, across cultures, and in different [social] classes.”

Caption:
“It really matters how adults think and talk about what it means to be a child,” says literature professor Marah Gubar, noting that childhood “is not just biological; it’s also a social and cultural matter, so it changes over time, across cultures, and in different [social] classes.”

When author Ruth Krauss and illustrator Maurice Sendak collaborated on several acclaimed children’s books in the 1950s, such as “A Hole Is to Dig,” their ideas came, in part, from interviews Krauss had conducted with kids.

That might surprise some people, who may assume that adults writing for children draw primarily from their own imaginations. But it makes sense to Marah Gubar, an MIT professor who specializes in upending assumptions about children’s literature. Gubar’s research has uncovered a lost landscape of once-popular children’s literature and theater, in many cases written by women. She has also found that kids have often contributed to the creation of children’s books, as storytellers, correspondents, and more.

“Children’s literature is full of examples of people who were inspired by children,” Gubar says. But too often, she adds, people “take for granted that adults are the only ones participating in the production of children’s literature.”

Now Gubar, a faculty member in MIT’s literature program, has a new research project that extends this insight. Gubar is trying to isolate and compare some of the most common ways we think about the nature of childhood — work she hopes will speak to many people, including child development specialists, teachers, librarians, psychologists, and the general public.

“It really matters how adults think and talk about what it means to be a child,” Gubar says, noting that childhood “is not just biological; it’s also a social and cultural matter, so it changes over time, across cultures, and in different [social] classes.”

As Gubar sees it, adults in many societies often embrace a “difference model” or “deficit model” of children, which highlights the things kids cannot do. She favors another perspective, the “kinship model,” in which children and adults are regarded as having similar kinds of abilities. If a parent acts as if children are capable of doing something new — such as understanding poetry, Gubar suggests — they just might be able to.

“Even if my four-year-old probably wouldn’t like poetry, I would still give it a try, because by doing so, I’m treating him in a way that’s potentially enabling as opposed to disabling,” Gubar says. By contrast, she adds, when adults do not think children can comprehend new things, “That can function as a self-fulfilling prophecy.”

For her extensive published research and engaged teaching, MIT recruited Gubar to join its faculty in 2014; she had previously taught at the University of Pittsburgh.

Gubar’s path into academia was indirect, but logical in retrospect. At first she wanted to be an actor, and graduated from the University of Michigan with a double major in literature and performance studies. Before long, though, Gubar became impatient with the limited opportunities in acting.

“You really have to want to be an actor more than anything in the world to put up with that,” she observes. “I have so much respect for people who pound the pavement. But I realized that wasn’t me.”

Instead, Gubar attended Princeton University’s PhD program in literature. Entering academia had a familiar feel to it: Gubar grew up in Bloomington, Indiana, where her parents were both professors at Indiana University.

Her father, Edward Gubar, has taught writing, literature, and journalism. Her mother, Susan Gubar, is co-author (with Sandra M. Gilbert) of “The Madwoman in the Attic,” an influential 1979 work of feminist literary criticism illuminating the confined set of roles female characters had been assigned in canonical works of fiction, and the strategies women writers used to import social critiques into their own works.

In graduate school, Gubar at first intended to study Victorian literature but focused on children’s literature after taking a course with the scholar Ulrich C. Knoepflmacher.

“He taught a class on children’s literature, and it was inspirational,” Gubar says. Knoepflmacher encouraged Gubar to expand the research she had put into one paper, on Juliana Ewing, a Victorian children’s author who, among other things, coined the term “Brownies,” for young Girl Scouts. “He said, this is really good, you should develop it into something longer. That paper became the germ of my whole dissertation and ‘Artful Dodgers,’” Gubar adds, referencing her first book.

That work, published in 2009 by Oxford University Press, examined Victorian children’s literature beyond its most famous stories, such as Lewis Carroll’s “Adventures in Alice in Wonderland.” Among Gubar’s conclusions were that dramatists and female authors played a key role in making the Victorian era a “golden age” for children’s literature; and that the Victorians did not just depict children through a Romantic lens as unsullied innocents, but understood children to be complex and capable beings.

Like her mentors, Gubar takes pride in being an engaged teacher, not just a scholar. In fact, those two parts of her job interact: Children’s literature professors, being few in number, have to teach broadly across historical eras and places, which helps Gubar think broadly about research.

“Undergraduate teaching has completely shaped the trajectory of my research,” Gubar says.

Some of Gubar’s writing is also directed explicitly toward a general audience, including essays she has written recently at the site Public Books. In one such 2014 piece, Gubar explored the theme of kids’ abilities in the award-winning 1967 E.L. Konigsburg book, “From the Mixed-Up Files of Mrs. Basil E. Frankweiler.”

“Konigsburg was committed to depicting young people as capable knowers of what goes on in their own minds, homes, and the wider world they inhabit,” Gubar writes of the story, in which two siblings run away to the Metropolitan Museum of Art and try to solve a mystery about a sculpture’s origins. “‘The Mixed-Up Files’ isn’t really about running away. It’s about how different people feel about knowledge.”

Gubar’s current book project is drawing heavily upon such modern sources to survey the ways adults have thought about the abilities of children. She hopes the eventual result will be read well beyond academia.

“I think we need a model for thinking about what it means to be a child that is simple enough that we can share it with all kinds of people,” Gubar says. “It would be great if we could share the insights we have beyond the academy and make it something people can use in their daily lives.”