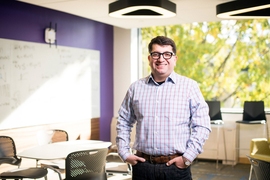 ↓ Download Image
Caption: Ali Jadbabaie is the JR East Professor of Engineering in the Department of Civil and Environmental Engineering, the associate director of the Institute for Data, Systems, and Society (IDSS), and the director of one of its parts, the Sociotechnical Systems Research Center. “Our focus is on addressing large societal problems, whether they be power systems and energy systems, or social networks, or financial systems, or urban systems,” he says. 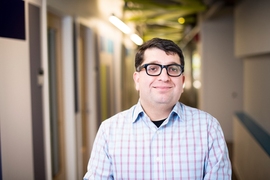 ↓ Download Image
Caption: “We at IDSS try to make sense of the effects of social interactions on people’s decisions. How do social cascades happen?” Ali Jadbabaie says.

Caption:
Ali Jadbabaie is the JR East Professor of Engineering in the Department of Civil and Environmental Engineering, the associate director of the Institute for Data, Systems, and Society (IDSS), and the director of one of its parts, the Sociotechnical Systems Research Center. “Our focus is on addressing large societal problems, whether they be power systems and energy systems, or social networks, or financial systems, or urban systems,” he says.
Credits:
Photo: Ian MacLellan

Caption:
“We at IDSS try to make sense of the effects of social interactions on people’s decisions. How do social cascades happen?” Ali Jadbabaie says.Photo: Ian MacLellan

Some of the biggest issues facing humanity — from global climate change, to water and power infrastructure, to monetary systems, social networks, and other complex systems — involve massive amounts of data that are daunting to analysts and policymakers. To help address these great challenges, MIT’s leaders decided a new approach was needed.

That decision led to the creation of the new Institute for Data, Systems, and Society (IDSS) two years ago, as a way to support and coordinate research using analytical tools to tackle major societal issues. Ali Jadbabaie was recruited from the University of Pennsylvania to serve as interim director of the Sociotechnical Systems Research Center and help establish IDSS and its doctoral program. Now, with the program well underway, Jadbabaie has come to MIT full-time, becoming the associate director of IDSS and continuing as director of SSRC.

Jadbabaie’s work has spanned many disciplines and departmental affiliations, but his central focus has remained relatively constant: understanding the way distributed systems of people and/or devices interact and work together, and how to optimize those systems and interactions. Although IDSS has its own faculty and will award its own PhD degrees, it is an institute that by its very nature spans too many disciplines to fall within the purview of any single department, or even any one of MIT’s five schools. All of its roughly 40 faculty members do also have joint appointments in other departments; Jadbabaie is the JR East Professor of Engineering in the Department of Civil and Environmental Engineering.

“Our focus is on addressing large societal problems,” he explains, “whether they be power systems and energy systems, or social networks, or financial systems, or urban systems.” The common theme, he says, is that IDSS “tries to address them all from the lens of working from data, to models, to decisions, by using analytical tools from data science.”

He says this approach builds on the long history of MIT’s Laboratory for Information and Decision Systems (LIDS), which is MIT’s oldest lab and now part of IDSS. Both of these entities take the approach of “combining data science with systems theory and social sciences to solve these large global problems.”

For example, one such large system is the nation’s electrical grid, which has grown in a piecemeal fashion over more than a century of operation. “It’s a large-scale engineering system that obeys physical laws, but it also interacts with human users, so its operation depends on how people act, and how they act collectively. If they all plug in at the same time, the system needs to adjust accordingly. And it’s not just the users that affect it: There are also the institutional effects of markets and regulators, and how you adjust prices.”

Traditionally, such large systems have been primarily studied and controlled by people working in particular disciplines — in the case of the grid, by power systems engineers. “But more and more,” Jadbabaie says, “you need to bring in the human systems, and the pricing and regulatory aspects. … It has evolved beyond anything anyone expected. You have all these services now that have this social aspect.”

“We at IDSS try to make sense of the effects of social interactions on people’s decisions. How do social cascades happen?” he says. For example, during the Arab Spring, social media played a major role in expanding a few individual acts of protest into widespread social movements. “All these social and political aspects, this interaction of the technology with the social systems — that’s why we felt that something like IDSS was needed” to help understand such systems in their entirety, he says.

Jadbabaie was born in Iran and grew up mostly in Tehran, where he earned his undergraduate degree. He met his wife, Nikroo Hashemi, in kindergarten there. They met again in college and got married toward the end of their respective doctoral research programs (she at Yale, and he at Caltech, where he earned his PhD in control and dynamical systems). Hashemi became a physician and now works as a transplant hepatologist at Brigham and Women’s Hospital in Boston.

His father, who is now retired in Iran, studied chemical engineering at MIT in the early 1960s, before spending most of his career as an academic administrator in his home country, including a stint as chancellor of two universities there.

Jadbabaie’s own research began with undergraduate studies in electrical engineering and then focused on systems engineering. His research areas included networks of mobile robots and sensors, and the behavior of swarms that need to interact locally and communicate efficiently to coordinate their activities. After a postdoc stint at Yale, he spent 14 years at the Department of Electrical and Systems Engineering at the University of Pennsylvania, with joint appointments in the Department of Computer and Information Science and the Department of Operations, Information and Decisions at the Wharton School, where he earned many awards for his work in the areas of optimization-based control, network science and network economics, and multiagent coordination.

Large, interactive networks, whether they be social networks, banking systems, teams of robots, or transportation systems, all involve the interaction of many different components including technology, economics, psychology, and communications. To address these systems in a systematic way, “there was this recognition that we need a new way of thinking about them that the traditional departmental structure doesn’t address,” he says. At IDSS, Jadbabaie says, he and his colleagues are set on “training a new generation of students in this kind of thinking.”

3Q: Fotini Christia and Ali Jadbabaie on researching the dynamics of sociopolitcal change

One year on, Institute for Data, Systems, and Society looks ahead