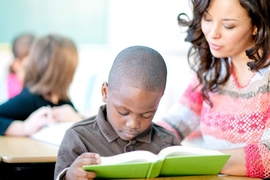 ↓ Download Image
Caption: Neuroscientists have long wondered why the brain has a region exclusively dedicated to reading — a skill that is unique to humans and only developed about 5,400 years ago.

Caption:
Neuroscientists have long wondered why the brain has a region exclusively dedicated to reading — a skill that is unique to humans and only developed about 5,400 years ago.

A new study from MIT reveals that a brain region dedicated to reading has connections for that skill even before children learn to read.

By scanning the brains of children before and after they learned to read, the researchers found that they could predict the precise location where each child’s visual word form area (VWFA) would develop, based on the connections of that region to other parts of the brain.

Neuroscientists have long wondered why the brain has a region exclusively dedicated to reading — a skill that is unique to humans and only developed about 5,400 years ago, which is not enough time for evolution to have reshaped the brain for that specific task. The new study suggests that the VWFA, located in an area that receives visual input, has pre-existing connections to brain regions associated with language processing, making it ideally suited to become devoted to reading.

“Long-range connections that allow this region to talk to other areas of the brain seem to drive function,” says Zeynep Saygin, a postdoc at MIT’s McGovern Institute for Brain Research. “As far as we can tell, within this larger fusiform region of the brain, only the reading area has these particular sets of connections, and that’s how it’s distinguished from adjacent cortex.”

Saygin is the lead author of the study, which appears in the Aug. 8 issue of Nature Neuroscience. Nancy Kanwisher, the Walter A. Rosenblith Professor of Brain and Cognitive Sciences and a member of the McGovern Institute, is the paper’s senior author.

The brain’s cortex, where most cognitive functions occur, has areas specialized for reading as well as face recognition, language comprehension, and many other tasks. Neuroscientists have hypothesized that the locations of these functions may be determined by prewired connections to other parts of the brain, but they have had few good opportunities to test this hypothesis.

Reading presents a unique opportunity to study this question because it is not learned right away, giving scientists a chance to examine the brain region that will become the VWFA before children know how to read. This region, located in the fusiform gyrus, at the base of the brain, is responsible for recognizing strings of letters.

Children participating in the study were scanned twice — at 5 years of age, before learning to read, and at 8 years, after they learned to read. In the scans at age 8, the researchers precisely defined the VWFA for each child by using functional magnetic resonance imaging (fMRI) to measure brain activity as the children read. They also used a technique called diffusion-weighted imaging to trace the connections between the VWFA and other parts of the brain.

The researchers saw no indication from fMRI scans that the VWFA was responding to words at age 5. However, the region that would become the VWFA was already different from adjacent cortex in its connectivity patterns. These patterns were so distinctive that they could be used to accurately predict the precise location where each child’s VWFA would later develop.

Although the area that will become the VWFA does not respond preferentially to letters at age 5, Saygin says it is likely that the region is involved in some kind of high-level object recognition before it gets taken over for word recognition as a child learns to read. Still unknown is how and why the brain forms those connections early in life.

Kanwisher and Saygin have found that the VWFA is connected to language regions of the brain in adults, but the new findings in children offer strong evidence that those connections exist before reading is learned, and are not the result of learning to read, according to Stanislas Dehaene, a professor and the chair of experimental cognitive psychology at the College de France, who wrote a commentary on the paper for Nature Neuroscience.

“To genuinely test the hypothesis that the VWFA owes its specialization to a pre-existing connectivity pattern, it was necessary to measure brain connectivity in children before they learned to read,” wrote Dehaene, who was not involved in the study. “Although many children, at the age of 5, did not have a VWFA yet, the connections that were already in place could be used to anticipate where the VWFA would appear once they learned to read.”

The MIT team now plans to study whether this kind of brain imaging could help identify children who are at risk of developing dyslexia and other reading difficulties.

“It’s really powerful to be able to predict functional development three years ahead of time,” Saygin says. “This could be a way to use neuroimaging to try to actually help individuals even before any problems occur.”