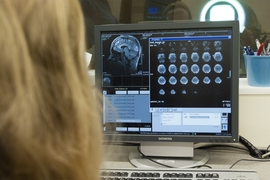 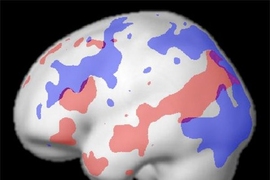 ↓ Download Image
Caption: A map of the different brain areas that are active while a subject performs a language task (red) and a cognitive control task (blue), showing that nearby but distinct regions are used for each activity.
Credits: Image courtesy of Fedorenko et al. 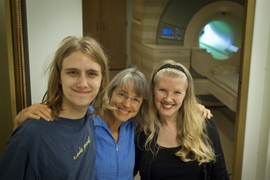 Caption:
A map of the different brain areas that are active while a subject performs a language task (red) and a cognitive control task (blue), showing that nearby but distinct regions are used for each activity.
Credits:
Image courtesy of Fedorenko et al.

Caption:
From left, MIT undergraduate Michael Behr, principal investigator Nancy Kanwisher and research scientist Evelina Fedorenko in front of the fMRI machine they use to measure real-time brain activity associated with language and other cognitive tasks.
Credits:
Photo: Patrick Gillooly
New research from MIT suggests that there are parts of our brain dedicated to language and only language, a finding that marks a major advance in the search for brain regions specialized for sophisticated mental functions.

Functional specificity, as it’s known to cognitive scientists, refers to the idea that discrete parts of the brain handle distinct tasks. Scientists have long known that functional specificity exists in certain domains: In the motor system, for example, there is one patch of neurons that controls the fingers of your left hand, and another that controls your tongue. But what about more complex functions such as recognizing faces, using language or doing math? Are there special brain regions for those activities, or do they use general-purpose areas that serve whatever task is at hand?

Language, a cognitive skill that is both unique to humans and universal to all human cultures, “seems like one of the first places one would look” for this kind of specificity, says Evelina Fedorenko, a research scientist in MIT’s Department of Brain and Cognitive Sciences and first author of the new study. But data from neuroimaging — especially functional magnetic resonance imaging (fMRI), which measures brain activity associated with cognitive tasks — has been frustratingly inconclusive. Though studies have largely converged on several areas important for language, it’s been hard to say whether those areas are exclusive to language. Many experiments have found that non-language tasks seemingly activate the same areas: Arithmetic, working memory and music are some of the most common culprits.

But according to Fedorenko and her co-authors — Nancy Kanwisher, the Walter A. Rosenblith Professor of Cognitive Neuroscience, and undergraduate student Michael Behr — this apparent overlap may simply be due to flaws in methodology, i.e., how fMRI data is traditionally gathered and analyzed. In their new study, published in this week’s Proceedings of the National Academy of Sciences, they used an innovative technique they’ve been developing over the past few years; the new method yielded evidence that there are, in fact, bits of the brain that do language and nothing else.

Forget the forest, it’s all in the trees

fMRI studies of language are typically done by group analysis, meaning that researchers test 10, 20 or even 50 subjects, then average data together onto a common brain space to search for regions that are active across brains.

But Fedorenko says this is not an ideal way to do things, mainly because the fine-grained anatomical differences between brains can cause data “smearing,” making it look as if one region is active in two different tasks when in reality, the tasks activate two neighboring — but not overlapping — regions in each individual subject.

By way of analogy, she says, imagine taking pictures of 10 people’s faces and overlaying them, one on top of another, to achieve some sort of average face. While the resulting image would certainly look like a face, when you compared it back to the original pictures, it would not line up perfectly with any of them. That’s because there is natural variation in our features — the size of our foreheads, the width of our noses, the distance between our eyes.

It’s the same way for brains. “Brains are different in their folding patterns, and where exactly the different functional areas fall relative to these patterns,” Fedorenko says. “The general layout is similar, but there isn’t fine-grained matching.” So, she says, analyzing data by “aligning brains in some common space … is just never going to be quite right.”

Ideally, then, data would be analyzed for each subject individually; that is, patterns of activity in one brain would only ever be compared to patterns of activity from that same brain. To do this, the researchers spend the first 10 to 15 minutes of each fMRI scan having their subject do a fairly sophisticated language task while tracking brain activity. This way, they establish where the language areas lie in that individual subject, so that later, when the subject performs other cognitive tasks, they can compare those activation patterns to the ones elicited by language.

A linguistic game of ‘Where’s Waldo?’

This methodology is exactly what allows Fedorenko, Behr and Kanwisher to see if there are areas truly specific to language. After having their subjects perform the initial language task, which they call a “functional localizer,” they had each one do a subset of seven other experiments: one on exact arithmetic, two on working memory, three on cognitive control and one on music, since these are the functions “most commonly argued to share neural machinery with language,” Fedorenko says.

Out of the nine regions they analyzed — four in the left frontal lobe, including the region known as Broca’s area, and five further back in the left hemisphere — eight uniquely supported language, showing no significant activation for any of the seven other tasks.  These findings indicate a “striking degree of functional specificity for language,” as the researchers report in their paper.

“The paper is a real advance in the neuroscience of language,” says Steven Pinker, a professor of psychology at Harvard University and author of several popular books including The Language Instinct and The Stuff of Thought. “Searching for language circuitry in the brain has been an exercise in ‘Where’s Waldo?’ — it has to be in there somewhere, but it’s so small, and mixed in with so many superficially similar things, that it’s been impossible to find. [The MIT researchers] have helped to bridge the chasm by combining fMRI with experimental psychology in a new and clever way.”

Future studies will test the newly identified language areas with even more non-language tasks to see if their functional specificity holds up; the researchers also plan to delve deeper into these areas to discover which particular linguistic jobs each is responsible for.

Fedorenko says the results don’t imply that every cognitive function has its own dedicated piece of cortex; after all, we’re able to learn new skills, so there must be some parts of the brain that are both high-level and functionally flexible. Still, she says, the results give hope to researchers looking to draw some distinctions within in the human cortex: “Brain regions that do related things may be nearby … [but] it’s not just all one big mushy multifunctional thing in there.”