Reality check in the factory 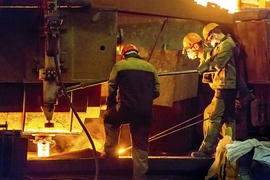 When the globalization of manufacturing took flight a few decades ago, the problem of industrial workplace safety also became fully globalized. As many scholars, human-rights advocates, and labor leaders have observed, that challenge consists of more than just persuading developing nations to create labor laws — it is also a matter of enforcing those labor laws.

Indeed, enforcement may be the greater challenge, as new factories continue to spread across vast distances in Asia, Central America, and other regions. Problems include unsafe buildings, inhumane hours, pollution, unpaid wages, and more. A common enforcement scenario today involves an underfunded regulatory agency with a small staff, and hundreds of potential cases to examine. Where do regulators even begin?

Matthew Amengual, an assistant professor at the MIT Sloan School of Management, started investigating that question on the ground in Argentina nearly a decade ago — talking to regulators, union bosses, firm managers, and key players with knowledge about labor conditions. Over time, he interviewed hundreds of people, watched inspections occur, and catalogued Argentina’s intricate regulatory politics as deeply as any outside observer has.

What Amengual found surprised him. A large thread within political science theory, drawing from the German sociologist Max Weber, holds that states can best enforce labor laws when they act as politically neutral arbiters of regulations. But such neutral arbiters largely did not exist in Argentina. There, many regulators only learned where to find malfeasance by working closely with non-neutral parties, say, union leaders, or immigrant groups. The process of regulation needed to be politicized to happen at all.

In other cases, active regulators came from the ranks of business managers who were using their knowledge to clean up their own industries. None of this was textbook political science theory. But it was how things worked.

“The capabilities of the state clearly increased through this political influence by all parties,” says Amengual. “But it was enforcement nonetheless that did matter for people’s lives.”

Now Amengual, who received his PhD in 2011 from MIT’s Department of Political Science, has produced a full account of his findings in a new book, “Politicized Enforcement in Argentina,” published this month by Cambridge University Press, which explores how regulations are actually enforced.

“Why does one worker get protections, but not another?” Amengual asks. “Why does one neighborhood get a response when there’s pollution, but not another? … Who gains influence [over regulation] and how they use that influence can really vary. And that’s going to matter for what states do. That’s something that has been pushed aside.”

A “watershed moment” in Amengual’s research occurred in the Argentine province of Cordoba, when an inspector he knew met up with a union leader representing metal workers. Soon the two of them, and Amengual, were driving off in the union leader’s car to a factory.

‘The labor unions have all kinds of information and resources that allow the inspectors to do their jobs,” Amengual says. In Cordoba, he notes, the regulators “didn’t even have cars to be able to go out and do the inspections. They didn’t have time. They didn’t have strong training.”

But the regulators did have information they could act on, courtesy of the unions — and so they did. Enforcement would not have been possible otherwise.

That said, while regulators were busy inspecting the metal industry, they were less watchful over small-scale brickmakers, an industry where many kinds of violations may have been even more abundant, but which lacked union organizing.

“You have enforcement, but it’s happening where the unions are present, not [always] where it’s most needed,” Amengual says.

It wasn’t just labor advocates driving regulation, however. Surprisingly, in the province of Tucuman, where sugar mills that produced ethanol were polluting the water, the move toward legal compliance occurred thanks in part to business managers who joined the government and pushed firms to meet environmental regulations.

The government hired regulators “right out of industry, they gave them short-term contracts, and some of them went right back into industry afterwards,” Amengual says. “It was a recipe for disaster, according to [political science theory]. But those were the guys who were actually doing something to enforce environmental laws.”

How could that happen? Amengual attributes it partly to the presence of environmental groups, in conjunction with the gradual increase in regulators’ ability to assess the pollution problems. “Industry actually wanted regulators between it and the social movement pressure,” Amengual observes.

In turn, Amengual says, he would like political scientists and policymakers alike to recognize these realities of regulation. Instead of regarding politicized enforcement as a tainted form of state action, he thinks, people should realize that labor regulations are always going to be political. The question is how to let the politics spur enforcement, while not totally capturing the process.

“If this is the way policies are being enforced in much of the world, it does matter,” Amengual asserts. “I don’t think Argentina is unique.”

While “Politicized Enforcement in Argentina” is Amengual’s first book, other scholars have taken note of his research, which has also been published in multiple journal articles in past years. Janice Fine, an associate professor in Rutgers University’s School of Management and Labor Relations, has called Amengual’s work “path-breaking” and says he is “an important voice in the debate about labor standards enforcement.”

Amengual is currently looking at the realities of workplace enforcement as they occur in a transnational regulatory program operating in Asia, and continues to emphasize issues of labor and environmental standards in his research.

As for the book — which got its start as a PhD dissertation in MIT’s Department of Political Science — Amengual says it was a “very MIT” project from the beginning, given its ambition of tackling a global issue through empirical research.

“One part of this project that is very MIT is that it’s motivated by big problems in the world,” Amengual concludes. “We know how to build factories that don’t collapse, yet factories collapse. We know that paying people to work motivates them and creates all kinds of good outcomes, but people have their wages stolen. How do we politically organize ourselves to respond to those challenges? When we go out into the world to conduct research, we update our understanding of what might be possible.”

How to make factory conditions better