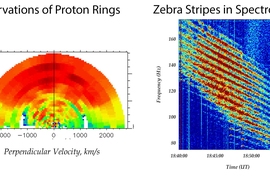 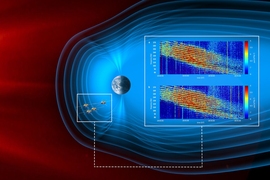 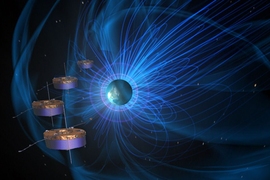 Since the early 1970s, orbiting satellites have picked up on noise-like plasma waves very close to the Earth’s magnetic field equator. This “equatorial noise,” as it was then named, seemed to be an unruly mess of electric and magnetic fields oscillating at different frequencies in the form of plasma waves.

In a region of space about 12,000 miles from Earth’s surface, two spacecraft separated by a narrow patch of space — about as wide as Rhode Island — identified a region where the tangle of plasma waves gives way to a very regular structure. The scientists detected the invisible structure using a spectrogram — a visual representation of the spectrum of frequencies in space. Through this lens, they observed a stack of 13 equally spaced, zebra-like stripes.

The team also observed something more curious: Each stripe, or plasma wave, appeared to be a multiple, or harmonic, of a proton gyrofrequency — the frequency at which protons gyrate around the Earth’s magnetic field line. The researchers performed some calculations to estimate the growth rate of each plasma wave, and discovered that the very orderly waves likely originated from the gyrating protons.

Yuri Shprits, a visiting associate professor in MIT’s Department of Earth, Atmospheric and Planetary Sciences, says the striped structure could indicate a region in space in which new and different interactions may take place.

“This structure is pretty close to the Earth, which is important because people want to understand the environment where satellites operate,” Shprits says. “Usually plasma undergoes a number of different instabilities, and waves tend to move from one region in space to another, so everything you see is noisy, very short-lived, and on smaller scales. But this structure seems to be very persistent, highly coherent in space, and was remarkably organized and structured, which we didn’t know could exist to such high degree.”

Shprits and his colleagues, including Benjamin Weiss, a professor of planetary sciences at MIT, have published their results today in the journal Nature Communications.

Searching for origins of equatorial noise

To detect the striped structure, the researchers used observations from the European Space Agency’s Cluster spacecraft — four identical satellites launched in 2000 to study the Earth’s magnetosphere, which is dominated by the Earth’s magnetic field.

However, instead of noise, the satellites picked up signals of a very orderly pattern: On July 6, 2013, two satellites, separated by 60 kilometers, observed 13 regularly spaced stripes in space, suggesting that the structure is at least that wide, embodying several wavelengths.

Comparing these measurements with the frequency of stripes detected, the researchers found that each stripe was a multiple, or harmonic, of the frequency at which protons gyrated around the Earth’s magnetic field line, increasing with each stripe from the 17th to the 31st harmonic.

A bump in the distribution

“You have this little bump where all of a sudden you have more particles traveling at faster speed than particles traveling at slower speeds,” Shprits says. “It turns out this is an unstable situation, so the distribution tries to settle to a stable state. It does that with a release of energy, and this energy goes into waves.”

The researchers then used computer codes to calculate the rate at which plasma waves were likely to grow, and the frequencies they would adopt, if they originated from such a proton ring distribution. As it turns out, the frequencies exactly matched the harmonic pattern observed by the satellites.

“We showed definitively that these waves are produced by these ion distributions,” Shprits says. “We’re resolving this almost half-century-old problem of the origin of this equatorial noise, definitively showing that it’s not noise, but actually very structured, periodic emissions produced by proton ring distributions.”

The detection of this periodic structure of waves indicates that they are likely generated by protons in the Van Allen radiation belts, says David Sibeck, a project scientist at NASA Goddard Space Flight Center. As such, he says scientists will have to start thinking of these waves as important factors in the formation of radiation belts throughout the universe.

“We simply don’t yet know how frequently this wave is present — the more common it is, the more important it is in energizing and removing dangerous charged particles from the Van Allen radiation belts,” says Sibeck, who was not involved in the study. “A discovery like this will set off a race to see when and where the waves occur. Waves like these might appear in the magnetospheres of Jupiter or Saturn, under the right circumstances, because both these planets have radiation belts.”

These waves may be able to accelerate or precipitate very energetic electrons that are harmful to miniature electronics in space. Shprits says the discovery may help scientists to more accurately model the space environment. Accurate predictions and specifications of the radiation environment can help protect scientific, meteorological, Earth-observing, and communications satellites.

Shprits says this research may also help identify new ways to remediate radiation in space. These periodic frequencies could match the frequency of electrons bouncing around the equator and act to scatter these particles into the atmosphere. Similar processes may also occur in laboratory plasmas, as well as outer planetary magnetospheres close to the sun, and beyond the heliosphere.

For the first time, spacecraft catch a solar shockwave in the act