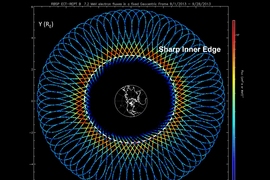 ↓ Download Image
Caption: This image shows a color-coded geographic representation of ultra-relativistic electron fluxes, based on orbital tracks of the Van Allen Probe B spacecraft projected onto the geographical equatorial plane. As the spacecraft precesses in its elliptical orbit around the Earth, it forms a “spirograph” pattern in the Earth-centered coordinate system. Inside of this radial distance is an almost complete absence of electrons, forming the “slot” region. The superimposed circle shows a sharp, distinctive inner boundary for ultra-relativistic electrons, and how generally symmetric this boundary is around Earth.
Credits: Courtesy of the reasearchers/Haystack Observatory

Caption:
This image shows a color-coded geographic representation of ultra-relativistic electron fluxes, based on orbital tracks of the Van Allen Probe B spacecraft projected onto the geographical equatorial plane. As the spacecraft precesses in its elliptical orbit around the Earth, it forms a “spirograph” pattern in the Earth-centered coordinate system. Inside of this radial distance is an almost complete absence of electrons, forming the “slot” region. The superimposed circle shows a sharp, distinctive inner boundary for ultra-relativistic electrons, and how generally symmetric this boundary is around Earth.

Credits:
Courtesy of the reasearchers/Haystack Observatory

High above Earth’s atmosphere, electrons whiz past at close to the speed of light. Such ultrarelativistic electrons, which make up the outer band of the Van Allen radiation belt, can streak around the planet in a mere five minutes, bombarding anything in their path. Exposure to such high-energy radiation can wreak havoc on satellite electronics, and pose serious health risks to astronauts.

Now researchers at MIT, the University of Colorado, and elsewhere have found there’s a hard limit to how close ultrarelativistic electrons can get to the Earth. The team found that no matter where these electrons are circling around the planet’s equator, they can get no further than about 11,000 kilometers from the Earth’s surface — despite their intense energy.

What’s keeping this high-energy radiation at bay seems to be neither the Earth’s magnetic field nor long-range radio waves, but rather a phenomenon termed “plasmaspheric hiss” — very low-frequency electromagnetic waves in the Earth’s upper atmosphere that, when played through a speaker, resemble static, or white noise.

Based on their data and calculations, the researchers believe that plasmaspheric hiss essentially deflects incoming electrons, causing them to collide with neutral gas atoms in the Earth’s upper atmosphere, and ultimately disappear. This natural, impenetrable barrier appears to be extremely rigid, keeping high-energy electrons from coming no closer than about 2.8 Earth radii — or 11,000 kilometers from the Earth’s surface.

“It’s a very unusual, extraordinary, and pronounced phenomenon,” says John Foster, associate director of MIT’s Haystack Observatory. “What this tells us is if you parked a satellite or an orbiting space station with humans just inside this impenetrable barrier, you would expect them to have much longer lifetimes. That’s a good thing to know.”

Foster and his colleagues, including lead author Daniel Baker of the University of Colorado, have published their results this week in the journal Nature.

The team’s results are based on data collected by NASA’s Van Allen Probes — twin crafts that are orbiting within the harsh environments of the Van Allen radiation belts. Each probe is designed to withstand constant radiation bombardment in order to measure the behavior of high-energy electrons in space.

The researchers analyzed the first 20 months of data returned by the probes, and observed an “exceedingly sharp” barrier against ultrarelativistic electrons. This barrier held steady even against a solar wind shock, which drove electrons toward the Earth in a “step-like fashion” in October 2013. Even under such stellar pressure, the barrier kept electrons from penetrating further than 11,000 kilometers above Earth’s surface.

To determine the phenomenon behind the barrier, the researchers considered a few possibilities, including effects from the Earth’s magnetic field and transmissions from ground-based radios.

Foster also considered the effect of long-range, very-low-frequency (VLF) radio transmissions, which others have proposed may cause significant loss of relatively high-energy electrons. Although VLF transmissions can leak into the upper atmosphere, the researchers found that such radio waves would only affect electrons with moderate energy levels, with little or no effect on ultrarelativistic electrons.

Instead, the group found that the natural barrier may be due to a balance between the electrons’ slow, earthward motion, and plasmaspheric hiss. This conclusion was based on the Van Allen probes’ measurement of electrons’ pitch angle — the degree to which an electron’s motion is parallel or perpendicular to the Earth’s magnetic field. The researchers found that plasmaspheric hiss acts slowly to rotate electrons’ paths, causing them to fall, parallel to a magnetic field line, into Earth’s upper atmosphere, where they are likely to collide with neutral atoms and disappear.

Mary Hudson, a professor of physics at Dartmouth College, says the data from the Van Allen probes “are providing remarkably detailed measurements” of the Earth’s radiation belts and their boundaries.

“These new observations confirm, over the two years since launch of the Van Allen probes, the persistence of this inner boundary, which places additional constraints on theories of particle acceleration and loss in magnetized astrophysical systems,” says Hudson, who did not participate in the research.

Foster says this is the first time researchers have been able to characterize the Earth’s radiation belt, and the forces that keep it in check, in such detail. In the past, NASA and the U.S. military have launched particle detectors on satellites to measure the effects of the radiation belt: NASA was interested in designing better protection against such damaging radiation; the military, Foster says, had other motivations.

“In the 1960s, the military created artificial radiation belts around the Earth by the detonation of nuclear warheads in space,” Foster says. “They monitored the radiation belt changes, which were enormous. And it was realized that, in any kind of nuclear war situation, this could be one thing that could be done to neutralize anyone’s spy satellites.”

The data collected from such efforts was not nearly as precise as what is measured today by the Van Allen probes, mainly because previous satellites were not designed to fly in such harsh conditions. In contrast, the resilient Van Allen Probes have gathered the most detailed data yet on the behavior and limits of the Earth’s radiation belt.

“It’s like looking at the phenomenon with new eyes, with a new set of instrumentation, which give us the detail to say, ‘Yes, there is this hard, fast boundary,’” Foster says.

This research was funded in part by NASA.

Researchers at the MIT Haystack Observatory have discovered that a phenomenon called “plasmaspheric hiss” prevents radiation from reaching Earth, reports Flora Graham for New Scientist. Graham explains that the plasmaspheric hiss is comprised of “very low-frequency electromagnetic waves,” which act like a radiation barrier.

Henry Hanks of CNN writes that MIT researchers have found that a protective field around Earth blocks high-energy electrons. “The phenomenon challenges existing theories that these electrons drift into the upper atmosphere and are destroyed by air molecules,” writes Hanks.

A river of plasma, guarding against the sun