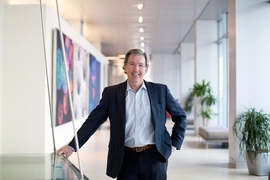 Tyler Jacks, a pioneering cancer biologist and director of MIT’s Koch Institute for Integrative Cancer Research, is this year’s recipient of MIT’s James R. Killian Jr. Faculty Achievement Award. Jacks is recognized for his leadership of MIT’s cancer research community, and his influence on the field of cancer research.

Roberto Rigobon, the Society of Sloan Fellows Professor at the MIT Sloan School of Management and chair of the Killian Award Selection Committee, made the announcement at today’s faculty meeting. The Killian Award is the highest honor MIT grants to members of its faculty.

As director of the Koch Institute, Jacks, the David H. Koch Professor of Biology, leads a multidisciplinary research community of cancer scientists and cancer-oriented engineers from departments across campus. According to the award citation, faculty and students alike praise his mentorship and his commitment to “bridging the different cultures, languages, and research agendas” of life sciences and engineering through the Koch Institute’s collaborative research model. In the citation, Jacks’ faculty colleagues also describe him as a “bold and visionary leader” who has cultivated a community of passionate and dedicated cancer researchers.

“I am especially moved by this honor because it’s being bestowed upon me by my peers,” Jacks says. “And considering the caliber of the peers I have here at the Koch Institute and across MIT, this is particularly special.”

Jacks has held a leadership role in MIT’s cancer research community since 2001, when he became director of the MIT Center for Cancer Research. Since the 2007 announcement of the creation of the Koch Institute, he has transformed — and augmented — this community, welcoming School of Engineering faculty to join biology faculty as part of this new integrative research hub.

Since the inception of the Koch Institute, Jacks has championed the convergence of disciplines to develop new insights into cancer as well as new tools to better diagnose, monitor, and treat the disease. Over its first seven years, the Koch Institute has seen an increase in interdisciplinary research investigations while new diagnostic tests and therapies are making their way into clinical trials. In this time, over a dozen companies have been created by Koch Institute faculty members or with intellectual property developed at the Koch Institute, further accelerating the translation of new solutions.

Jacks says that the Killian Award holds great importance to him, as MIT has always been an integral part of his life — even well before he joined the faculty 23 years ago.

“Receiving this honor is deeply meaningful to me in part because of my long connection to MIT, which dates back to my childhood,” Jacks says.

Growing up in Southborough, Massachusetts, Jacks was a frequent visitor to MIT: His father, Stanley, was a professor at MIT Sloan. As he approached college age, Jacks’ father implored him to attend MIT — and even promised a new car if he did so. Though the younger Jacks instead enrolled at Harvard University — opting to attend his father’s alma mater over his father’s employer — MIT continued to shape his career.

Jacks says a defining moment of his undergraduate education occurred when Robert Weinberg, an MIT professor of biology, visited Harvard in 1981 to give a guest lecture on the emerging field of cancer genetics. Weinberg had recently discovered the first human cancer-causing gene — or oncogene — and offered Jacks a glimpse into what the future of cancer research might hold.

From then, Jacks set his trajectory on unraveling the mysteries of the cancer genome. He earned his PhD from the University of California at San Francisco in 1988, where he worked with Harold Varmus, who went on to win the 1989 Nobel Prize in physiology or medicine. After graduate school, Jacks returned to Cambridge to join Weinberg’s Whitehead Institute laboratory as a postdoc.

Jacks joined the MIT faculty in 1992 as a member of the Department of Biology, based at the Center for Cancer Research. He was an early pioneer in genetically engineering mouse models of human cancer, providing a platform for studying how cancers caused by specific genetic mutations behave and respond to different therapies. Through his use of gene-targeting technology to create these models, Jacks quickly emerged as an international leader of this subfield of cancer research. His models are today used in laboratories of cancer researchers throughout the world, including in the neighboring labs of his collaborators at the Koch Institute.

“I’ve been surrounded by MIT faculty and MIT research for almost my entire life, and to now be counted in the ranks of Killian Award winners is truly humbling,” Jacks says.

Jacks was named a Howard Hughes Medical Investigator in 2002, and received the Paul Marks Prize in cancer research in 2005. He served as president of the American Association for Cancer Research from 2009 to 2010, and in 2011 was named chair of the National Cancer Institute’s National Cancer Advisory Board. He also has been elected to the National Academy of Sciences, the Institute of Medicine, and the American Academy of Arts and Sciences.

The James R. Killian Jr. Faculty Achievement Award was established in 1971 “to recognize extraordinary professional accomplishments by full-time members of the MIT faculty.” The recipient is chosen by a faculty committee from candidates nominated by their peers for outstanding contributions to their fields, to MIT, and to society.