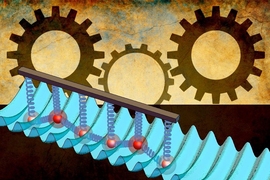 ↓ Download Image
Caption: A new technique tunes friction between two surfaces, to the point where friction can vanish. MIT researchers developed a frictional interface at the atomic level. The blue corrugated surface represents an optical lattice; the red balls represent ions; the springs between them represent Coulomb forces between ions. By tuning the spacing of the ion crystal surface above to mismatch the bottom corrugated surface, friction disappears. The ions smoothly slide along the surface in a caterpillar-like motion. This discovery could aid in developing nanomachines, built from components the size of single molecules.
Credits: Illustration: Christine Daniloff/MIT and Alexei Bylinkskii

Caption:
A new technique tunes friction between two surfaces, to the point where friction can vanish. MIT researchers developed a frictional interface at the atomic level. The blue corrugated surface represents an optical lattice; the red balls represent ions; the springs between them represent Coulomb forces between ions. By tuning the spacing of the ion crystal surface above to mismatch the bottom corrugated surface, friction disappears. The ions smoothly slide along the surface in a caterpillar-like motion. This discovery could aid in developing nanomachines, built from components the size of single molecules.
Credits:
Illustration: Christine Daniloff/MIT and Alexei Bylinkskii

Friction is all around us, working against the motion of tires on pavement, the scrawl of a pen across paper, and even the flow of proteins through the bloodstream. Whenever two surfaces come in contact, there is friction, except in very special cases where friction essentially vanishes — a phenomenon, known as “superlubricity,” in which surfaces simply slide over each other without resistance.

Now physicists at MIT have developed an experimental technique to simulate friction at the nanoscale. Using their technique, the researchers are able to directly observe individual atoms at the interface of two surfaces and manipulate their arrangement, tuning the amount of friction between the surfaces. By changing the spacing of atoms on one surface, they observed a point at which friction disappears.

Vladan Vuletic, the Lester Wolfe Professor of Physics at MIT, says the ability to tune friction would be helpful in developing nanomachines — tiny robots built from components the size of single molecules. Vuletic says that at the nanoscale, friction may exact a greater force — for instance, creating wear and tear on tiny motors much faster than occurs at larger scales.

“There’s a big effort to understand friction and control it, because it’s one of the limiting factors for nanomachines, but there has been relatively little progress in actually controlling friction at any scale,” Vuletic says. “What is new in our system is, for the first time on the atomic scale, we can see this transition from friction to superlubricity.”

Vuletic, along with graduate students Alexei Bylinskii and Dorian Gangloff, publish their results today in the journal Science.

Learn about the technique MIT physicists developed to simulate friction at the nanoscale.

The team simulated friction at the nanoscale by first engineering two surfaces to be placed in contact: an optical lattice, and an ion crystal.

The optical lattice was generated using two laser beams traveling in opposite directions, whose fields add up to form a sinusoidal periodic pattern in one dimension. This so-called optical lattice is similar to an egg carton, where each peak represents a maximum electric potential, while each trough represents a minimum. When atoms travel across such an electric field, they are drawn to places of minimum potential — in this case, the troughs.

Vuletic then engineered a second surface: an ion crystal — essentially, a grid of charged atoms — in order to study friction’s effects, atom by atom. To generate the ion crystal, the group used light to ionize, or charge, neutral ytterbium atoms emerging from a small heated oven, and then cooled them down with more laser light to just above absolute zero. The charged atoms can then be trapped using voltages applied to nearby metallic surfaces. Once positively charged, each atom repels each other via the so-called “Coulomb force.” The repulsion effectively keeps the atoms apart, so that they form a crystal or lattice-like surface.

The team then used the same forces that are used to trap the atoms to push and pull the ion crystal across the lattice, as well as to stretch and squeeze the ion crystal, much like an accordion, altering the spacing between its atoms.

An earthquake and a caterpillar

“It’s like an earthquake,” Vuletic says. “There’s force building up, and then there’s suddenly a catastrophic release of energy.”

The group continued to stretch and squeeze the ion crystal to manipulate the arrangement of atoms, and discovered that if the atom spacing is mismatched from that of the optical lattice, friction between the two surfaces vanishes. In this case, the crystal tends not to stick then suddenly slip, but to move fluidly across the optical lattice, much like a caterpillar inching across the ground.

For instance, in arrangements where some atoms are in troughs while others are at peaks, and still others are somewhere in between, as the ion crystal is pulled across the optical lattice, one atom may slide down a peak a bit, releasing a bit of stress, and making it easier for a second atom to climb out of a trough — which in turn pulls a third atom along, and so on.

“What we can do is adjust at will the distance between the atoms to either be matched to the optical lattice for maximum friction, or mismatched for no friction,” Vuletic says.

Gangloff adds that the group’s technique may be useful not only for realizing nanomachines, but also for controlling proteins, molecules, and other biological components.

“In the biological domain, there are various molecules and atoms in contact with one another, sliding along like biomolecular motors, as a result of friction or lack of friction,” Gangloff says. “So this intuition for how to arrange atoms so as to minimize or maximize friction could be applied.”

Tobias Schaetz, a professor of physics at the University of Freiburg in Germany, sees the results as a “clear breakthrough” in gaining insight into “otherwise inaccessible fundamental physics.” The technique, he says, may be applied to a number of areas, from the nanoscale to the macroscale.

“The applications and related impact of their novel method propels a huge variety of research fields investigating effects relevant from raft tectonics down to biological systems and motor proteins,” says Schaetz, who was not involved in the research. “Just imagine a nanomachine where we could control friction to enhance contact for traction, or mitigate drag on demand.”

Robert Ferris writes for CNBC that MIT researchers have developed a new technique for creating surfaces that can slide past each other without friction. The researchers hope to use the technique to “build devices that can preserve themselves by being nearly immune to friction.”