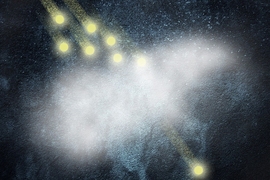 ↓ Download Image
Caption: An artist's conception shows how any number of incoming photons (top) can be absorbed by a cloud of ultra-cold atoms (center), tuned so that only one single photon can pass through at a time. Being able to produce a controlled beam of single photons has been a goal of research toward creating quantum devices.
Credits: Graphic: Christine Daniloff

Caption:
An artist's conception shows how any number of incoming photons (top) can be absorbed by a cloud of ultra-cold atoms (center), tuned so that only one single photon can pass through at a time. Being able to produce a controlled beam of single photons has been a goal of research toward creating quantum devices.
Credits:
Graphic: Christine Daniloff
In theory, quantum computers should be able to perform certain kinds of complex calculations much faster than conventional computers, and quantum-based communication could be invulnerable to eavesdropping. But producing quantum components for real-world devices has proved to be fraught with daunting challenges.

Now, a team of researchers at MIT and Harvard University has achieved a crucial long-term goal of such efforts: the ability to convert a laser beam into a stream of single photons, or particles of light, in a controlled way. The successful demonstration of this achievement is detailed in a paper published this week in the journal Nature by MIT doctoral student Thibault Peyronel and colleagues.

Senior author Vladan Vuletić, the Lester Wolfe Professor of Physics at MIT, says the achievement “could enable new quantum devices” such as quantum gates, where a single photon switches the direction of travel or polarization of another photon. This goal has been very hard to attain, Vuletić explains, because photons ordinarily interact, at best, only very weakly with one another.

Encouraging such interactions requires atoms that interact strongly with photons — as well as with other atoms that, in turn, can affect other photons. For example, a single photon traveling through a cloud of such atoms might pass through easily, but change the state of the atoms so that a second photon is blocked when it tries to pass through. That means that if two photons try to pass through at once, only one will succeed, while the other is absorbed.

So, in the new system, no matter how many photons are sent into such a cloud of atoms, only one at a time emerges from the other side. The cloud acts as a kind of turnstile for photons, forcing a jumbled mob into an orderly succession of individuals.

Atac Imamoglu, professor of physics at ETH Zurich, who was not involved in this research, says “I view this work as a true breakthrough in quantum optics, as the authors realize a completely novel way of inducing strong interactions between single photons.”

The system is based on a phenomenon called electromagnetically induced transparency (EIT), used previously as a way of slowing a beam of light. (The well-known invariance of the speed of light, first formulated by Albert Einstein, only applies to light in a vacuum. Light traveling through matter can move at different speeds.) Various research groups, including members of this team of MIT and Harvard researchers, had published results a decade ago showing that light, and even single photons, could be slowed to a walking pace — or even stopped altogether — and then allowed to resume a normal speed.

This slowing of light is achieved by passing a focused laser beam through a dense cloud of ultracold atoms (in this case, rubidium atoms) chilled to about 40 microkelvins, or 40 millionths of a degree above absolute zero. This cloud is normally opaque to light, but a separate laser beam produces the EIT state that lets photons pass through at a slow speed while elevating atoms to an excited state. Atoms in this state (called a Rydberg state) interact very strongly with each other, meaning that a second photon does not meet the EIT condition if the first photon is still in the medium. So whenever a single photon enters, it passes through the temporarily transparent medium; when two or more enter, the gas becomes opaque again, blocking all but the first photon.

“If you send in one photon, it just passes through, but if you send in two or three, forcing them to squeeze through the tight focus of the laser beam, just one passes,” says Ofer Firstenberg, a Harvard postdoc who is one of the paper’s co-authors. “It’s like a lot of sand going into an hourglass, but only one grain at a time can pass through,” he says.

As a result, a conventional laser beam — a bundle of photons — fired into one end of this new apparatus comes out the other end as a sequential string of individual photons.

Stephen Harris, professor of electrical engineering and professor of applied physics emeritus at Stanford University, who was not connected with the project, says the team’s experiment “worked significantly better than I might have guessed that it would. This is likely due to the, in my mind, unexpectedly robust interactions of nearby Rydberg atoms.” As a result of this work, he says, “For the first time, non-resonant single photon physics is a reality.”

The technique can be used to alter the state of the atoms according to the number of photons striking them, with a second laser beam detecting those changed states. “One big goal has been to measure a photon without affecting it,” Vuletić says. “We know how to detect individual optical photons, but only by destroying them. This technique should allow you to measure your photon and keep it, too.”

Eugene S. Polzik, professor of physics at the Niels Bohr Institute at Copenhagen University and director of the Danish Center for Quantum Optics, says, “Demonstration of the efficient nonlinear interaction at a single photon level is one of the most important goals in quantum information processing. This work is an exciting new development in this direction. It paves the way towards new implementations of photon quantum logic.”

The system could lead to the development of a single-photon switch, the team says. It could also be used to develop quantum logic gates, an essential component of an all-optical quantum information-processing system. Such systems, in principle, could be immune from eavesdropping when used for communication, and could also allow much more efficient processing of certain kinds of computation tasks.

Besides potential commercial applications, the system offers new insights into the basic interactions between light and matter, Vuletić says.

Stanford’s Harris calls this a “wonderful and major scientific advance.”

The work was conducted in collaboration with Mikhail Lukin’s group at Harvard and was partly supported by the National Science Foundation, the MIT-Harvard Center for Ultracold Atoms, and the Air Force Office of Scientific Research’s Quantum Memories Multidisciplinary University Research Initiative.