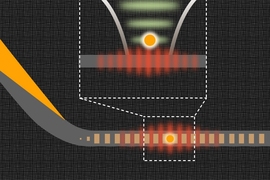 ↓ Download Image
Caption: Scientists have developed a new method of trapping rubidium atoms in a lattice of light, which could help the development of quantum computing.
Credits: Illustration: Christine Daniloff/MIT

Caption:
Scientists have developed a new method of trapping rubidium atoms in a lattice of light, which could help the development of quantum computing.
Credits:
Illustration: Christine Daniloff/MIT

Using a laser to place individual rubidium atoms near the surface of a lattice of light, scientists at MIT and Harvard University have developed a new method for connecting particles — one that could help in the development of powerful quantum computing systems.

The new technique, described in a paper published today in the journal Nature, allows researchers to couple a lone atom of rubidium, a metal, with a single photon, or light particle. This allows both the atom and photon to switch the quantum state of the other particle, providing a mechanism through which quantum-level computing operations could take place.

Moreover, the scientists believe their technique will allow them to increase the number of useful interactions occurring within a small space, thus scaling up the amount of quantum computing processing available.

That is, photons can have two polarization states, and interaction with the atom can change the photon from one state to another; conversely, interaction with the photon can change the atom’s phase, which is equivalent to changing the quantum state of the atom from its “ground” state to its “excited” state. In this way the atom-photon coupling can serve as a quantum switch to transmit information — the equivalent of a transistor in a classical computing system. And by placing many atoms within the same field of light, the researchers may be able to build networks that can process quantum information more effectively.

“You can now imagine having several atoms placed there, to make several of these devices — which are only a few hundred nanometers thick, 1,000 times thinner than a human hair — and couple them together to make them exchange information,” Vuletić adds.

Quantum computing could enable the rapid performance of calculations by taking advantage of the distinctive quantum-level properties of particles. Some particles can be in a condition of superposition, appearing to exist in two places at the same time. Particles in superposition, known as qubits, could thus contain more information than particles at classical scales, and allow for faster computing.

However, researchers are in the early stages of determining which materials best allow for quantum-scale computing. The MIT and Harvard researchers have been examining photons as a candidate material, since photons rarely interact with other particles. For this reason, an optical quantum computing system, using photons, could be harder to knock out of its delicate alignment. But since photons rarely interact with other bits of matter, they are difficult to manipulate in the first place.

In this case, the researchers used a laser to place a rubidium atom very close to the surface of a photonic crystal cavity, a structure of light. The atoms were placed no more than 100 or 200 nanometers — less than a wavelength of light — from the edge of the cavity. At such small distances, there is a strong attractive force between the atom and the surface of the light field, which the researchers used to trap the atom in place.

Other methods of producing a similar outcome have been considered before — such as, in effect, dropping atoms into the light and then finding and trapping them. But the researchers found that they had greater control over the particles this way.

“In some sense, it was a big surprise how simple this solution was compared to the different techniques you might envision of getting the atoms there,” Vuletić says.

The result is what he calls a “hybrid quantum system,” where individual atoms are coupled to microscopic fabricated devices, and in which atoms and photons can be controlled in productive ways. The researchers also found that the new device serves as a kind of router separating photons from each other.

“The idea is to combine different things that have different strengths and weaknesses in such a way to generate something new,” Vuletić says, adding: “This is an advance in technology. Of course, whether this will be the technology remains to be seen.”

‘Still amazing’ to hold onto one atom

The collaboration between the MIT and Harvard researchers is one of two advances in the field described in the current issue of Nature. Researchers at the Max Planck Institute of Quantum Optics in Germany have concurrently developed a new method of producing atom-photon interactions using mirrors, forming quantum gates, which change the direction of motion or polarization of photons.

“The Harvard/MIT experiment is a masterpiece of quantum nonlinear optics, demonstrating impressively the preponderance of single atoms over many atoms for the control of quantum light fields,” says Gerhard Rempe, a professor at the Max Planck Institute of Quantum Optics who helped lead the German team’s new research, and who has read the paper by the U.S.-based team. “The coherent manipulation of an atom coupled to a photonic crystal resonator constitutes a breakthrough and complements our own work … with an atom in a dielectric mirror resonator.”

Rempe adds that he thinks both techniques will be regarded as notable “achievements on our way toward a robust quantum technology with stationary atoms and flying photons.”

If the research techniques seem a bit futuristic, Vuletić says that even as an experienced researcher in the field, he remains slightly awed by the tools at his disposal.

“For me what is still amazing, after working in this for 20 years,” Vuletić reflects, “is that we can hold onto a single atom, we can see it, we can move it around, we can prepare quantum superpositions of atoms, we can detect them one by one.”

Funding for the research was provided in part by the National Science Foundation, the MIT-Harvard Center for Ultracold Atoms, the Natural Sciences and Engineering Research Council of Canada, the Air Force Office of Scientific Research, and the Packard Foundation.