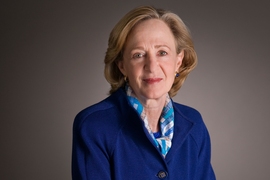 The following is adapted from a press release issued today by the American Association for the Advancement of Science.

Susan Hockfield, president emerita of MIT, has been chosen to serve as president-elect of the American Association for the Advancement of Science (AAAS). She will begin her three-year term as an officer and member of the Executive Committee of the AAAS Board of Directors on Feb. 16, 2016, at the conclusion of the 182nd AAAS Annual Meeting in Washington. She will retain the role of president-elect for one year, followed by a term as president in 2017 and a term as chair of the AAAS Board of Directors in 2018.

Hockfield served as president of MIT from 2004 to 2012 and continues to hold a faculty appointment as professor of neuroscience and a member of the Koch Institute for Integrative Cancer Research. Hockfield, whose research focuses on the development of the brain and on glioma, a deadly form of brain cancer, pioneered the use of monoclonal antibody technology in brain research.

As president of MIT, she oversaw the launch of numerous scientific initiatives, including the MIT Energy Initiative, the Koch Institute for Integrative Cancer Research, the Institute for Medical Engineering and Science, and the Ragon Institute of MGH, MIT, and Harvard.

Hockfield earned her PhD from the Georgetown University School of Medicine. She was a National Institutes of Health postdoc at the University of California at San Francisco and a member of the scientific staff at the Cold Spring Harbor Laboratory in New York before joining the faculty at Yale University in 1985. At Yale, Hockfield was later named the William Edward Gilbert Professor of Neurobiology. She also served as dean of the Yale University Graduate School of Arts and Sciences and as provost of the university until joining MIT in 2004.

“Importantly, in all of these roles I came to appreciate the responsibility of academics to communicate their discoveries to the non-scientific community and to bring their perspectives into policy decisions,” Hockfield said in a candidacy statement.

At the close of the 2016 Annual Meeting, Barbara Schaal will begin her term as AAAS president. Schaal is the dean of the faculty of arts and sciences and the Mary-Dell Chilton Distinguished Professor in the Department of Biology in Arts and Sciences at Washington University in St. Louis. The current president, Geraldine Richmond, will become chair of the AAAS Board of Directors. Richmond is currently the presidential chair in science and professor of chemistry at the University of Oregon.

Susan Hockfield to step down