Institute’s leader from 2004 to 2012 joins her predecessors on the walls of the president’s residence.
Chuck Leddy | MIT News correspondent
Publication Date:
Press Inquiries 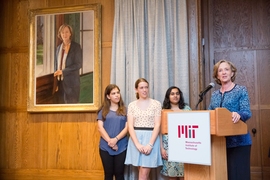 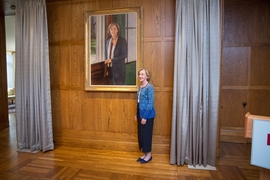 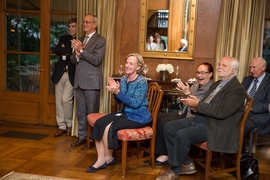 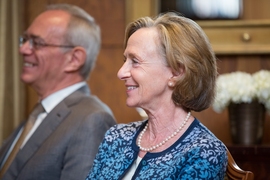 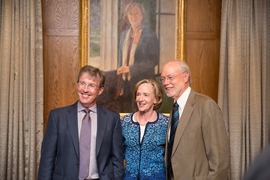 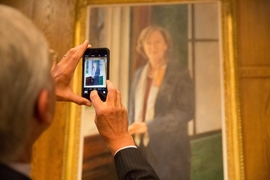 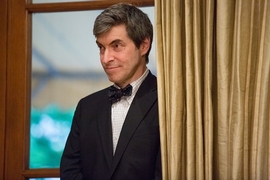 Caption:
President Emerita Susan Hockfield, who led MIT from 2004 to 2012, speaks at the unveiling of her presidential portrait at Gray House.

Caption:
Hockfield with her portrait, painted by Steven Polson.

Caption:
Hockfield with President L. Rafael Reif (standing, to her right) at the portrait's unveiling.

Members of the MIT community gathered Friday evening at Gray House to celebrate President Emerita Susan Hockfield, who led the Institute from 2004 to 2012. The evening culminated in the unveiling of a presidential portrait of Hockfield, painted by Steven Polson.

President L. Rafael Reif greeted the audience, explaining how Hockfield’s presidency played a “transformative role” in the history of the Institute. “Susan changed [MIT] forever,” he said, “and our gratitude will endure forever.”

Reif provided a brief overview of Hockfield’s legacy as president, highlighting her focus on creating cross-disciplinary collaboration in cancer research (with the founding of the Koch Institute for Integrative Cancer Research) and clean energy (with the founding of the MIT Energy Initiative, or MITEI). “She provided exceptional leadership for MIT in many other areas, from advanced manufacturing to MIT150, from diversity to digital learning, and from Kendall Square to our global engagements,” Reif noted.

Reif, who had been selected by Hockfield to serve as provost, called her a “master of the art of leadership,” in both obvious and less obvious ways.

“Through her years as president,” Reif said, “the world saw Susan’s visible qualities as a leader: her brilliance; her unlimited capacity for hard work; her gift for seeing a subject from many angles; her ability to deliver calm, clarity, and confidence; and her personal standards of dedication and excellence, which challenged all of us to be the best that we could be.”

Yet-Ming Chiang, the Kyocera Professor of Ceramics in the Department of Materials Science and Engineering, cited Hockfield’s approach to creating MITEI: “The way [Susan] did it was by being inclusive,” Chiang said — noting that she had even consulted colleagues at other institutions.

The final faculty speaker, Institute Professor Phillip Sharp, cited Hockfield’s collaborative legacy as exemplified by the Ragon Institute and the Broad Institute, as well as the amazing growth of Kendall Square as a global biotechnology center.

Several of Hockfield’s student advisees unveiled Polson’s portrait of her. Prior to painting Hockfield, the New York-based artist had painted official portraits for the State Department of three former Secretaries of State: Colin Powell, Madeleine Albright, and Condoleezza Rice.

“Susan herself was what was so different about painting this portrait,” Polson told MIT News. “She brought a scientist’s perspective to the studio, and showed great interest in all parts of the process.”

When Hockfield took to the podium, she turned the focus away from herself and back to MIT’s long history of achievement and its vibrant community. When she lived among the presidential portraits at Gray House, Hockfield noted, “I would sometimes look at these giants, and feel very much like I was standing on their shoulders and feel confident that my feet were on a strong foundation. I only hoped that I could lay a foundation stone as incredible.”

After describing her wish that the eyes of her just-unveiled portrait could reflect the MIT community she now watched in front of her, Hockfield concluded, “It’s a remarkable community to be a part of, and it’s remarkable to reflect your ambitions, your desires, your dreams, and actually see them come true.”

Susan Hockfield to step down