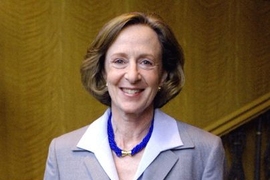 ↓ Download Image
Caption: Susan Hockfield, a distinguished neuroscientist and current provost at Yale University, has been selected the 16th president of the Massachusetts Institute of Technology.
Credits: Photo / Donna Coveney

Caption:
Susan Hockfield, a distinguished neuroscientist and current provost at Yale University, has been selected the 16th president of the Massachusetts Institute of Technology.
Credits:
Photo / Donna Coveney

Susan Hockfield, a distinguished neuroscientist and current Provost at Yale University, has been selected the 16th president of the Massachusetts Institute of Technology, succeeding Charles M. Vest, who has led one of the world's foremost research universities for the past 14 years.

Dr. Hockfield was elected by the MIT Corporation during a special meeting of that governing body on August 26. She is expected to take office in early December.

In making the announcement, Corporation Chairman Dana G. Mead said, "As a strong advocate of the vital role that science, technology, and the research university play in the world, and with an exceptional record of achievement in serving faculty and student interests, Dr. Hockfield is clearly the best person to lead MIT in the years ahead. She brings to MIT an outstanding record as teacher, scientist and inspirational leader with a reputation for bringing out the best in all the people with whom she works."

The William Edward Gilbert Professor of Neurobiology, Hockfield joined the Yale faculty in 1985. She was promoted to full professor in 1994 and quickly rose to the center of leadership at Yale, first as Dean of Yale's Graduate School of Arts and Sciences (1998-2002), with oversight of over 70 graduate programs, and then as Provost, the university's chief academic and administrative officer, with oversight of the University's 12 schools.

Richard C. Levin, President of Yale University, said, "Susan Hockfield has been an outstanding dean and provost. She has the intelligence, judgment, and interpersonal skills to be a superb president. She has a broad understanding of the future direction of science and technology, and is well prepared to assume the leadership of MIT and to take a leading role in shaping national science policy."

James A. Champy, who chaired the presidential search committee for the MIT Corporation, said, "Dr. Hockfield emerged from a stellar field of candidates as the best person to lead MIT to new frontiers of innovation and leadership in research and education. She possesses a rare combination of scientific achievement, outstanding managerial talent, and an extremely engaging personal style that will serve MIT's faculty, students and staff very well."

Institute Professor Jerome Friedman, who chaired the faculty advisory committee on the presidential search, commented, "Professor Hockfield has made significant scientific contributions in her career, and she is highly appreciative of the creative blending of basic and applied research to address some of the most important problems of our time. This and her commitment to the social sciences, humanities and the arts point to her interest in facilitating new intellectual interactions among faculty and students in all five Schools of the Institute. She is a superb choice to lead MIT."

Among other priorities, Hockfield says she intends to use her new position to encourage collaborative work among MIT's outstanding schools, departments, and interdisciplinary laboratories and centers to keep the Institute at the forefront of innovation. She sees MIT's strength in engineering uniquely positioning the Institute to pioneer newly evolving, interdisciplinary areas and to translate them into practice. She also hopes to accelerate the national discussion on improving K-12 science and math education. She believes strongly in the value that international students and scholars bring to the educational and research programs of American universities, and in the importance of American universities working closely with leading academic centers around the world.

Commenting on her election, Dr. Hockfield said, "Around the world, MIT stands as an emblem of discovery and innovation, produced through the scholarship of its outstanding faculty, students and graduates. From my first conversations in the search process, the Institute's central themes - the pursuit of truth, integrity, and the great meritocracy - have resonated with my own core values. This remarkable community's curiosity, intellectual commitment and passionate determination to solve problems have brought immeasurable benefit to humankind. It is an enormous honor and a very great privilege to have been selected to join this effort as MIT's next president."

In her work as a neuroscientist, Hockfield pioneered the use of monoclonal antibody technology in brain research, leading to her discovery of a protein that regulates changes in neuronal structure as a result of an animal's experience in early life. More recently, she discovered a gene and its family of protein products that play a critical role in the spread of cancer in the brain and may represent new therapeutic targets for brain cancer.

As Dean of Yale's Graduate School of Arts and Sciences, Professor Hockfield had responsibility for 73 doctoral and masters degree programs that enrolled approximately 2,300 students. In addition, she had oversight for faculty appointments and promotions in all of the science and engineering departments and in several social science departments in the Faculty of Arts and Sciences. She played a key role in recruiting exceptional scholars and teachers and in increasing the number of women faculty.

During her tenure as Graduate School Dean, she effectively and creatively revitalized the administration of the school and addressed longstanding problems in academic, extracurricular and financial support for graduate students. She worked with student, faculty and alumni groups to build a much stronger sense of community and to improve the integration of the Graduate School into the rest of the university. The number of applicants to the Graduate School doubled to over 9,000 during her tenure and, through the establishment of an Office for Diversity and Equal Opportunity, the number of students enrolling from under-represented minority groups increased dramatically.

As Provost, she has advanced Yale's major initiatives in science, medicine and engineering, which include a $500 million investment in new and renovated facilities for the sciences. She has encouraged collaborative work throughout the university, bringing the humanities and the arts into new relationships and encouraging interactions between the humanities and the sciences. She has also worked to enhance administrative services for the entire university.

Susan Hockfield received her bachelor's degree in biology from the University of Rochester in 1973, and earned a Ph.D. in anatomy and neuroscience from Georgetown University School of Medicine in 1979. She carried out postdoctoral research at the University of California, San Francisco. Prior to joining the Yale faculty, she was a Senior Staff Investigator at the Cold Spring Harbor laboratory, a research and educational institution focusing on cancer, neurobiology, plant genetics, genomics and bioinformatics.

Her husband, Thomas N. Byrne, is Clinical Professor of Neurology, Neurosurgery and Internal Medicine at Yale's School of Medicine. They have one daughter.